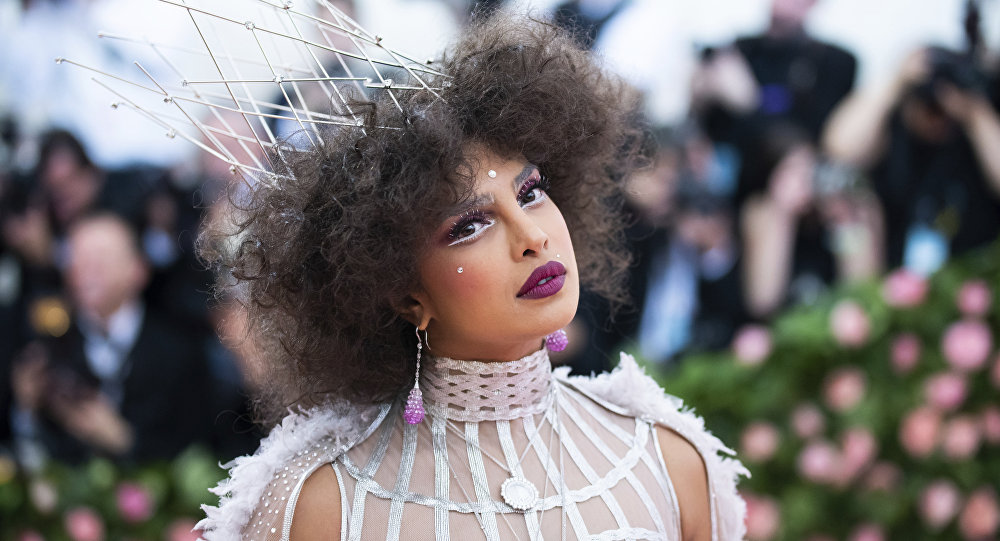 A youth activist of the Bhartiya Janata Party, Priyanka Sharma, has been charged under various stringent sections of Indian law, some of which are non-bailable offences, for posting a meme of Mamata Banerjee, the chief minister of the Indian state of West Bengal, using a picture of Priyanka Chopra’s MET 2019 hairdo.

New Delhi (Sputnik): Twitter users appear to be up in arms after a 25-year-old female political activist was sent to judicial custody in the Indian state of West Bengal for sharing a meme of Priyanka Chopra’s recent hairstyle on the State’s Chief Minister Mamata Banerjee.

The Bharatiya Janata Party activist, Priyanka Sharma, was reportedly apprehended on Friday and produced before the chief judicial magistrate on Saturday, who remanded her into 14-day judicial custody.

This was Priyanka Chopra’s costume and hair style during the recently concluded MET 2019 Gala event, which was the “real” original inspiration of the meme targeting Mamata Banerjee.

Forget humor, any sort of expression is dead in @MamataOfficial‘s Bengal. Priyanka Sharma, our district executive member, @bjym4howrah was arrested for posting a Met Gala-themed meme on Mamata Banerjee ji.#ISupportPriyankaSharma and Mamata Didi must release her immediately.

Some users wanted the central government to intervene against what they perceived to be “state government” high-handedness.

Netizens called it an autocratic, despotic, and dictatorial trend.

“Murder of democracy”, one user commented.

“Sarcasm is very devastating weapon when used again tyrant”, said a user, insinuating that Mamata Banerjee was a tyrant.

The activist is facing heat for sharing a meme of another “Priyanka” — this one of the celebrity couple Nick-yanka — using a weirdo hairdo donned by the former Miss World diva during the MET 2019 Gala to make a caricature of Chief Minister Mamata Banerjee.

The “victim” of caricature is Mamata Banerjee, who is fighting hard to hold on to West Bengal state. Priyanka Sharma is the district club convenor of the opposition party’s youth wing, the Bharatiya Janata Yuva Morcha.