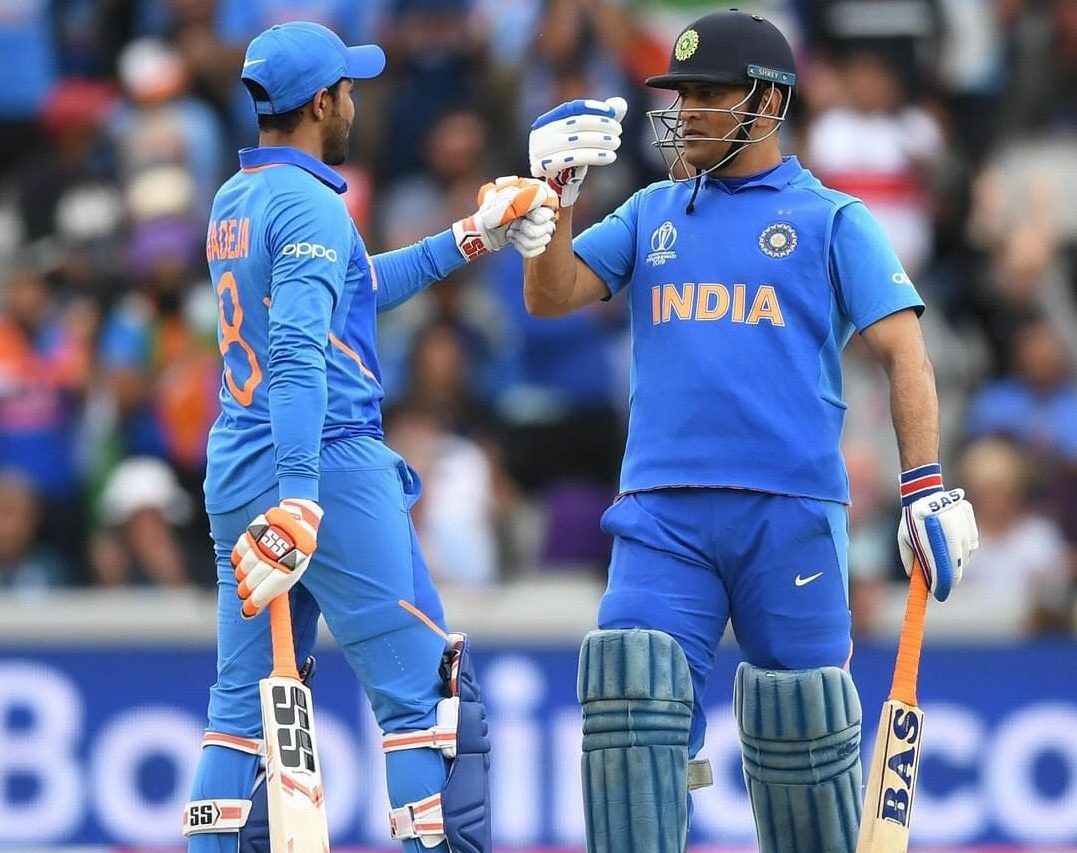 India’s World Cup dreams came to an end. After an exceptional showcase of world class cricket throughout the tournament, the Men in Blue suffered a shocking 18-run defeat against New Zealand in a nail-biting semi-final at Old Trafford in Manchester. New Zealand chose to bat first after winning the toss, and the Indian bowlers did a phenomenal wonder as India’s target reached only as high as 240. However, India suffered a top-order blow when they were three down in the first four overs. But hopes came back to life when Ravindra Jadeja walked out to bat and joined MS Dhoni in the 31st over when India was reeling at 96 for 6. Jadeja scored 79 runs in 59 bowls and Dhoni scored a half century, and even if they lost, the two ace players as well as team India garnered respect from all over the world.

Twitter was buzzing as the Kiwis edged past India in the thriller semi-final and this is how they reacted.

💔 just like every 🇮🇳 supporter.
A good fight put up by @imjadeja & @msdhoni but @BLACKCAPS were exceptional today.
Congrats to 🇳🇿 on making it to the Finals & all the best for the same.
I felt #KaneWilliamson’s captaincy & composure played a crucial role in this result.#NZvIND pic.twitter.com/3sUlW21cgN

Congratulations to @BLACKCAPS on making it to the finals. Jadeja played an outstanding innings and got India in the game along with MS Dhoni, yet it was a case of so near yet so far #IndvNZ

A run out by a direct hit. One superb catch. Economical ten overs. And the best knock of his ODI career. It’s not fair to end up on the losing side…well played, Jadeja. #CWC19 #IndvNZ

Congratulations to Kane Williamson and the @BLACKCAPS for making it to a second successive World Cup Finals. Ravindra Jadeja along with Dhoni fought brilliantly and got India so close but NZ were brilliant with the new ball and that was decisive. #IndvNZ

A disappointing result, but good to see #TeamIndia’s fighting spirit till the very end.

India batted, bowled, fielded well throughout the tournament, of which we are very proud.

Wins and losses are a part of life. Best wishes to the team for their future endeavours. #INDvsNZ

Whatever happens that was some innings from Jadeja

What an innings. One of the most spunky, in a World Cup semifinal. Jadeja 77 off 59. And a nerveless catch from Williamson under extreme pressure. #CWC19 #INDvNZ

Is Dhoni going to get out of second gear before the last over. Heart in mouth stuff.

#TeamIndia, we stand with you in victory & defeat. You have played incredibly well, fought your hardest & made your country proud. #INDvNZ

Proud of you #TeamIndia .
Hey, you had a bad day; so what; Shit happens! The greatest of people have innumerable defeats so hang in there! We believe in you since you’ve succeeded many times & made us proud.
You have played brilliantly.
Lots of love & duas!
💙🧢🇮🇳🤗#INDvsNZ

Hard luck team india .. played a very spirited game through the tournament 👏🏽👏🏽 the wicket of Dhoni and his walk back just broke my heart #INDvsNZ proud nonetheless 💪🏽 pic.twitter.com/iGCPhIhLEU

Watching @imVkohli answering questions at the press conf. Replying with poise, grace and wisdom. Guess he’d rather be with his teammates right now….but he’s doing his job brilliantly over here too. Must be tough. Great job Virat.#INDvNZL #INDvsNZ #CWC2019

My view – India is still the best one day international team.

It’s just that we’re not so good in two day internationals…..#INDvsNZ

We win some, we lose some, but it’s all about the sport & the spirit of the game that unites us all! Well played #TeamIndia!!@BCCI #WorldCupSemiFinal @cricketworldcup @ICC #IndvsNZ pic.twitter.com/WMpVxJVGNO

But we must also congratulate @imjadeja & @msdhoni for the fighting spirit shown in the #CCWorldCup2019 semifinal !

We were, are and will always be proud of you #TeamIndia !@cricketworldcup#INDvsNZ #INDvNZL

I DID , I DO & I WILL ALWAYS BELIEVE IN MY TEAM INDIA!!! #INDvsNZ pic.twitter.com/QvHuS7YWs3

Though they’re a billion broken hearts tonight, Team India, you put up a great fight and are deserving of our love & respect.

Congratulations to New Zealand on their well earned win, that gives them a place in the World Cup final. #INDvNZ #CWC19

You are a true legend of the game @msdhoni, @imjadeja what a brilliant knock !!!! Sad that we a lost today but proud of our Indian Team – & many congratulations to team New Zealand on their win.

Respect and thank you team india for giving us everything. #NZvsIND

Team India! 🇮🇳 We are proud of you. It was a rare bad day in office. Chin up. Well played. Well fought. #INDvNZ

If this was chased down:

So please spare the bull and be proud of the boys! They did well. #INDvNZ

India did not bat well enough to reach the final. A resilient effort by Jadeja & Dhoni. They almost brought India back into the game.
So a big upset, New Zealand goes through to final, India knocked out. #INDvsNZ #CWC19 #semifinal

We can still win this guys..believe in them.. support your team 🇮🇳 #INDvsNZ

Under pressure middle order needs to learn how to take singles and at the moment we are struggling to do that. This is why experience plays an important role, hopefully mahi can take us through . #INDvNZL

Dhoni has become the Nehru of Indian cricket.
The guy who got us our second WC is India’s favourite punching bag.
No body is bothered about the dismal performance of the openers because you all are blind haters.

I hate to sound like an old school uncle( trollers will say aunt but it’s not about me) whn I say ..”nazar lag gayee..”the boys fought valiantly and had a great run! We must applaud their incredible journey..not just focus on the destination! #ICCCWC2019 @imVkohli and team INDIA

Win or Lose.. Fans will always be with u.. #Dhoni #Jadeja #TeamIndia #CSK pic.twitter.com/PXfNHiuDkd

Heartbroken at India’s exit from the #CWC19
Nevertheless #Jadeja and #Dhoni put up a great fight to bring the game down to the wire.
It just wasn’t our day!
Let’s give credit to @imVkohli & his team for playing their hearts out !! #indiavsNewzealand

Dear @imVkohli – absolutely no shame in this defeat !! We celebrate this Indian team performance all through this #CWC19 . You guys have been the best team in display !! We are proud of you and your team !! #kohli #jadeja #Dhoni #indiavsNewzealand #INDvNZ

Jaddu, My boy on fire! Way to go brother! We can do it 🙌 #Jadeja

Wow! He knocked the bits and pieces off the stumps. Important wicket! #Jadeja #NZvIND

5️⃣0️⃣ up for #Jadeja! And the sword celebration is out. He single-handedly has changed the course of this chase. What an innings this has been!#PlayBold #INDvNZ

Whatever happens, post this match, hopefully no one will ever have the audacity to call #Jadeja a “bits n pieces player” ever again🙌🏼 #INDvNZ #cwc19 #JadejaVsManjrekar

There is always a but and an if. Nevertheless, he is Never the Less. 🦁💛 #WhistleForIndia #Thala #INDvNZ #CWC19 pic.twitter.com/dcFXeBuI43

A solid fight from these two, but unfortunately, #TeamIndia‘s #CWC19 campaign ends here 😔

We lose sometimes & it hurts too, this just shows how precious victory is. But more precious is our ability to dust off the defeat, fix the reasons behind the defeat & bounce back to fight again. That’s wht makes us real champions

I’m sad..!! Jus very sad.. #CWC19 #TeamIndia you deserved to be in the finals…🇮🇳🇮🇳🇮🇳 but it’s a game and at the end of the day thank you for entertaining us nonetheless.we will always love you #dhoni..n support our team forever. #indiaforever #dhoniforever #thaladhoniforlife.. pic.twitter.com/NWlqXIkoaz

This is what sports is all about. Winning and losing so closely. In the end whoever played better wins.
Which is why no one’s wins all the time. But we thank #CricketWorldCup2019 #TeamIndia for their comeback. I loved it. But also felt sad that #Dhoni did not carry the day.

We tried. We fought. Till the end. And at the end, that’s what matters. Well played Team India. We love you! #IndvNZ

Sad …South Asia lost the chance to get the cup , may be some lessons are learnt #India 😉hard luck , congrats #NewZealand well played 👏👏👏

Love and respect to our indian cricket team ALWAYS! in wins and in losses, we are with you 🇮🇳 well played boys!

#teamindia all the best for the future challenges. We are proud of you. Today was just #onebadday ! @msdhoni you and @imjadeja were so good🙏 #CricketWorldCup2019