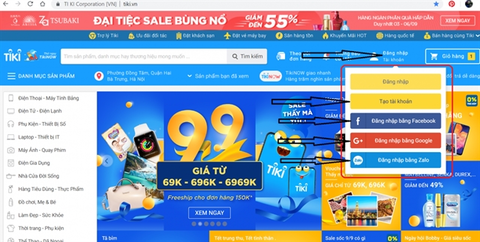 Tiki’s monthly web traffic surged by 69 per cent within a year from nearly 20 million to 33.7 million, helping it gain the sixth position in the top ten list in the first half of 2019. — Photo Tiki

HANOI — Five Vietnamese e-commerce platforms were named among ten most visited sites in Southeast Asia in the first half of this year.

The five others in the top ten were Shopee (first) and Lazada (second), which were also conducting business in Viet Nam, and three unicorns from Indonesia – Tokopedia, Bukalapak and Blibli.

The five Vietnamese e-commerce companies’ inclusion was concrete evidence of the size and potential of e-commerce in Viet Nam, which was forecast to surge 43 per cent by 2025 – the highest growth rate – by Google last year.

According to the iPrice report, monthly web traffic of Tiki surged by 69 per cent within a year from nearly 20 million to 33.7 million, helping it gain the sixth position in the top ten list.

The impressive achievements came after Tiki received US$4 million of investment from JD.com in a round of series C funding in January 2018, which made JD become one of the largest shareholders in Tiki.

Ngo Hoang Gia Khanh, Tiki’s finance and development manager, told the media in May this year that Tiki targeted $50-100 million from strategic investment funds or groups of financial investors.

Meanwhile, Sendo has posted strong development, especially in the second quarter of 2019 when its web traffic rose by 10 per cent to more than 28 million while other large sites, including Tiki, Lazada Vietnam and Shopee Vietnam, saw a decline.

The report of iPrice Group also indicated that web traffic to the top ten e-commerce websites in Viet Nam in the first half of this year increased by 11 per cent compared to the same period last year.

This data showed websites play an important role for e-commerce in Viet Nam, despite the significant competition from social networking platforms and mobile applications, the report noted.

Viet Nam was also one of the two countries, along with Indonesia, that has seen an increase in e-commerce traffic, while the remaining four countries – Thailand, Malaysia, Singapore and the Philippines – showed a sharp decline.

Representatives of iPrice Group attributed the rise to the high competition in Viet Nam’s e-commerce market. They explained that Viet Nam has many e-commerce companies with strong financial potential in the top ten list and the rankings of the companies are not too far from each other.

This competitiveness motivates the companies to continue to maintain multi-channel activities, including website channels, to reach customers continuously. Meanwhile, in countries like Singapore, the Philippines and Malaysia, the competition is almost only between Lazada and Shopee, the representatives said.

Don’t miss out on the latest news and information.

Social Media News
Previous Post
From Brunei Prince Abdul Mateen to the Queen: which royals have the most followers on their social media accounts?
Next Post
Internet marketing,Public Relations,Part time – Mumbai, India