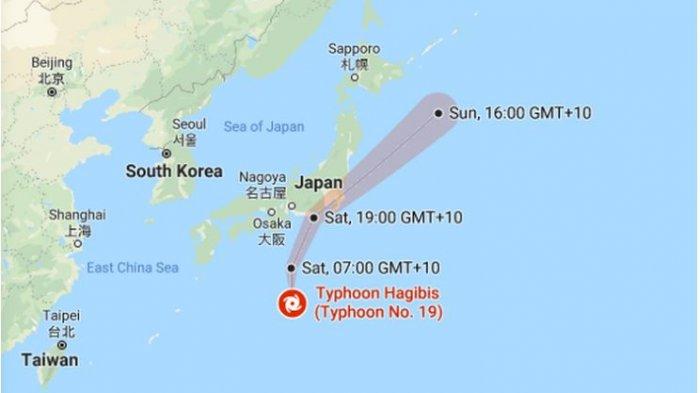 TRIBUNBATAM.id – The hashtag #SaveJapan is widely discussed on Twitter social media. Until Friday (10/11/2019) afternoon around 16.55 West Indonesia Time, the hashtag has been discussed as many as 181 thousand times.

Some netizens in the hashtag conveyed their concern for the Typhoon Hagibis disaster which is expected to occur in Japan.

“Praying so hard for Japan. Please be safe from this Hagibis Typhoon. Hagibis Typhoon is equivalent to level 5 hurricane I hope Typhoon will pass through without anyone getting hurt and less damaged ” writes the account @taylor_thinnPS

“I hope that you stay safe #Savejapan” said the account @ heyjeju.

• What Is Psychopath? Check the Symptoms Here

The Japan Meteorological Department warned that Typhoon Hagibis could be a typhoon this time as strong as the Kanogawa typhoon that struck Shizouka Prefecture and the Tokyo area in 1958.

Reporting from the New York Times, typhoon Kanogawa in 1958 killed more than 1,200 people.

Meanwhile, launching from the NHK website, the Japanese are currently preparing to face the Hagibis typhoon which is expected to hit most of Japan over the weekend.

The weather forecast said that the storm is likely to pass directly over the Tokyo area, which is the capital of Japan.

Residents are advised to prepare, to face strong winds and heavy rain.