Kabir Khan’s upcoming sports drama 83 is one of most anticipated films of 2020. However, as the release date draws near, it seems Khan has already landed himself in trouble with cricket fans. A factual error during an interview had Twitterati questioning Khan’s research for 83.

Speaking to Bollywood Hungama, Khan pointed out how the 1983 world cup was a turning point for the Indian cricket team as the country had never won a cricket world cup match before. “Till ‘83, India had never won a single match in the history of the World Cup. The first match of the World Cup in 83 was India vs West Indies where they actually defeated the West Indies, which was the big upset.”

Check out the interview snippet here

However, this statement seems to have angered fans, after which Twitterati did their own research, and pointed out in the first Cricket World Cup in 1975, India won a match defeating East Africa by 10 wickets. Check out some of the reactions here

I was so excited about this film. But if they haven’t done Wikipedia level research then it really reduces their credibility and my excitement. #83TheFilm https://t.co/fPuDs9PEMK — Siddhant Singh (@siddhanntsingh) January 13, 2020

The 1975 East African team after listening to this pic.twitter.com/fCAtTq6Emr

What rubbish? India had won a match against East Africa in 1975 world cup. Here is score card of the match.https://t.co/1pYvSNkPjA

Ridiculous statement by @kabirkhankk For the fact..India DEFEATED WEST INDIES in the same world cup BEFORE FINAL. West Indies LOST ONLY 2 matches in that world cup. Both against India. The OTHER match in World CUP 1983 where India DEFEATED WI before defeating WI again in final. pic.twitter.com/B0wIAaSzfp — Lock Omoplata (@LockOmoplata) January 13, 2020

83 features Ranveer Singh as former Indian skipper Kapil Dev, and chronicles India’s historic win under his captainship, when the Men in Blue defeated the West Indies to bag their first ever World Cup trophy.

The film is scheduled to release on 10 April. 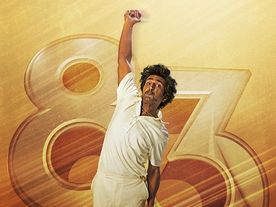