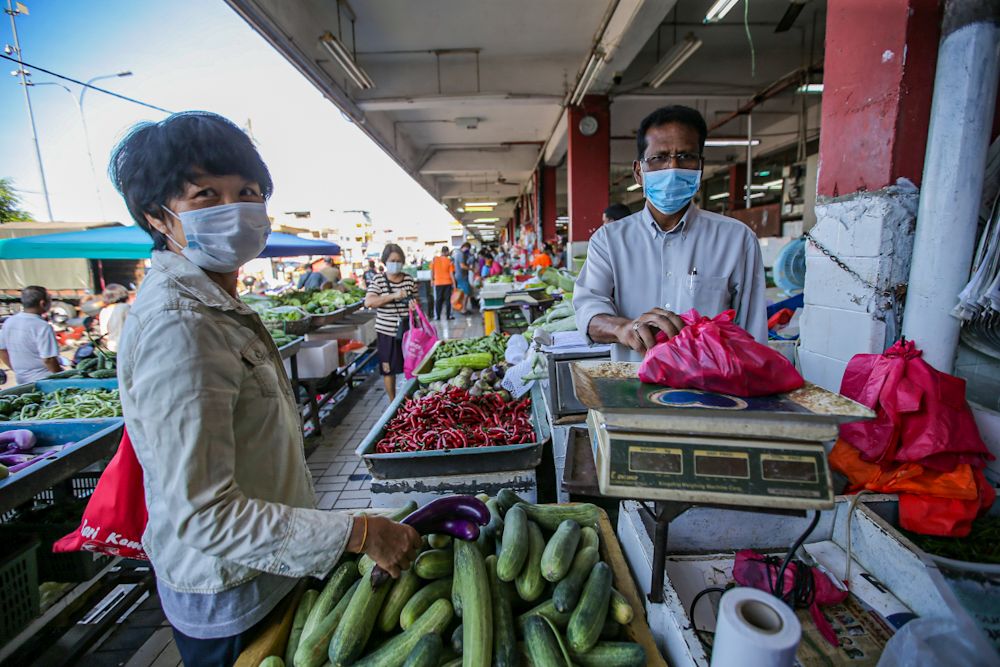 But with most food stalls and restaurants closed, and the number of people allowed to visit the market restricted by the movement control order (MCO), demand for his products have plummeted. Now, his earnings have dropped by nearly half.

“Usually I’d sell about 15 baskets so I’ll get about RM200 in earnings for, say, once in two days,” he told Malay Mail.

“But since the last few days I haven’t been able to sell the last three to four baskets, each costing about RM100 so you can say I’ve lost nearly half my earnings (because of the MCO).”

Desperately trying to curb losses, Ishak, who is based in Ayer Tawar, Perak, has looked to social media to sell his goods.

But that hasn’t worked out as well, and he fears the poor sales, compounded by the extended shutdown, could get worse and eat into his daily expenses.

“I tried selling the remaining baskets (of goods) on Facebook,” he said.

“I did get some friends to help, so they’d buy maybe around 5kgs of long beans, brinjals but that’s it.”

Ishak’s predicament reflects the plight of smallholders wrought by the state-enforced shutdown.

As most Malaysians now eat indoors, food stalls and wet markets are forced to cut back on supplies, directly affecting earnings of the thousands of farmers who grow most of the country’s food products.

“The Selayang market said they can’t take much anymore because they’re struggling to sell,” he explained.

“I’ve heard some were even told to take their supplies back. If you can’t sell them at the markets what are we supposed to do with it?”

And with the MCO extended until April 14, Ishak is worried that the worst is yet to come. Just eight days into the current shutdown, he already had his earnings cut by half.

He is also fearful that the government may add more restrictions in the near future. Despite the initial pledge to let wet markets remain open, the authorities have since asked most to either close, limit trading time or restrict the number of customers allowed to shop.

“I have to spend hundreds of ringgit for fertilisers, weed killers and also pay my workers who help me collect the vegetables at the farm,” he lamented.

“I pay them RM200 each. If the government can give any incentive, anything at all, we’d appreciate it. I’m not the only one affected, all the farmers I know are too.”

Ishak’s daughter herself has taken to Twitter to sell the unsold baskets of vegetables and fruits. Using the account, @NWahidaIshak, she posted photos of brightly coloured brinjals and cucumbers, accompanied by a plea for help.

“For those living near Ayer Tawar area, Seri Iskandar, Beruas, Manjung interested in buying cucumbers/brinjals in bulk or small orders you can contact my dad Mr Ishak Othman,” she wrote.

“Since the control order, no suppliers want to take them because the markets are closed.”

The tweet has since drawn widespread attention, including from academics and the Department of Agriculture (DOA).

“It’s not because of on paper regulations, but the hassle that transporters might have to go through that discourage them. Again, this is based on anecdotal stories that I have read,” he said in a text reply to Malay Mail.

“Another reason why this is happening is because pasar malam/tani are closed.”

Meanwhile, the DOA has responded by helping promote farmers’ goods on its Facebook page. But the response has been lukewarm so far, with only 150 shares made since the post was published two days ago.

“Please put photos of your products, location and contact number at the comment section below or tag me at @mydoaHQ in your posting. We will share it here,” the department wrote.

Only 110 farmers have responded to date.

Experts have suggested more can be done. Ashraf, for one, said the DOA should consider mobilising agencies under them to ramp up collection services and market farmers produce.

The KRI researcher is also urging the department to proactively identify farmers who need help, including farmers who are not formally registered with the relevant agencies.

“Social media is a good way, but find other ways to identify those who are not under the radar,” he said.