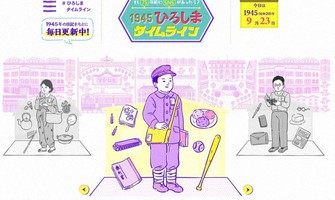 HIROSHIMA — Following criticism over the portrayal of Koreans in public broadcaster NHK’s Twitter project “Hiroshima Timeline,” the Korean Residents Union in Japan (Mindan) filed a request with the Hiroshima Legal Affairs Bureau on Sept. 23, demanding relief measures for infringement on human rights as well as an advisory warning to NHK’s Hiroshima broadcasting station in charge of the project.

The project was premised on imagining how the closing events of World War II would have been tweeted had social media existed 75 years ago, and three Twitter accounts of fictional residents of Hiroshima have been continuing to tweet about their lives during and after the war since March. As the descriptions are based on journal entries by real individuals, the project drew attention for enabling users to get a real sense of what everyday life was like at that time.

Mindan’s main headquarters human rights protection committee claimed in its filed document that posts marked as being made on Aug. 20, 1945 — including the description of “a crowd of Koreans from one of the victorious countries” who “threw other passengers out of windows” — showed “a narrative that accentuates the immorality of Koreans, and also lacked explanatory notes on the background of events.” The committee insisted that the posts violate the International Convention on the Elimination of All Forms of Racial Discrimination and Japan’s anti-hate speech law by falling under “unjust actions of discrimination.” The group also claimed that NHK has not provided a clear explanation on the specific events that led to the posts or countermeasures to prevent a recurrence, and demanded that the Hiroshima Legal Affairs Bureau conduct a necessary investigation and issue a warning to the broadcaster.

As the controversial tweets have not been deleted, Lee Keun Chool, 66, chairman of the human rights protection committee, said after filing the petition, “NHK’s response to the situation is insincere. We’d like for them to delete the post.”

Lee Yeong Jun, 59, head of the Hiroshima regional headquarters at Mindan commented, “It is disappointing that they used social media easily without much thought. The same thing will happen again if the reasons behind the actions are not examined.”

A public relations representative for the NHK Hiroshima broadcasting station stated, “It is unacceptable for public media to be viewed as promoting discrimination. We would like to take thorough measures to prevent a recurrence.”