Facebook (NASDAQ:FB) last released its quarterly earnings data on Thursday, October 29th. The social networking company reported $2.71 EPS for the quarter, beating analysts’ consensus estimates of $1.94 by $0.77. Facebook had a return on equity of 23.27% and a net margin of 32.00%. The firm had revenue of $21.47 billion for the quarter, compared to analysts’ expectations of $19.78 billion. During the same period in the prior year, the firm posted $2.12 earnings per share. The firm’s quarterly revenue was up 21.6% on a year-over-year basis. As a group, sell-side analysts anticipate that Facebook, Inc. will post 9.18 earnings per share for the current fiscal year.

Facebook, Inc develops products that enable people to connect and share with friends and family through mobile devices, personal computers, virtual reality headsets, and in-home devices worldwide. The company’s products include Facebook that enables people to connect, share, discover, and communicate with each other on mobile devices and personal computers; Instagram, a community for sharing photos, videos, and private messages; Messenger, a messaging application for people to connect with friends, family, groups, and businesses across platforms and devices; and WhatsApp, a messaging application that is used by people and businesses to communicate in a private way.

See Also: What is the Shanghai Stock Exchange Composite Index?

Want to see what other hedge funds are holding FB? Visit HoldingsChannel.com to get the latest 13F filings and insider trades for Facebook, Inc. (NASDAQ:FB). 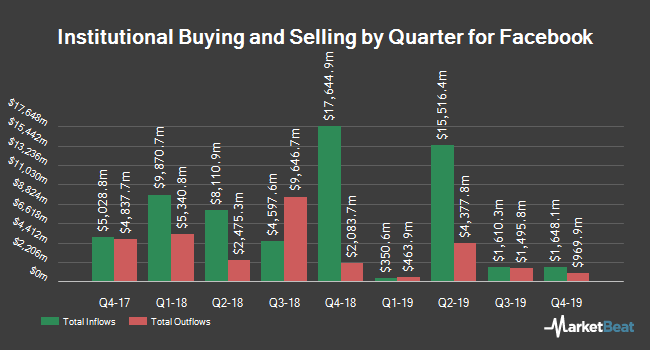 Receive News & Ratings for Facebook Daily – Enter your email address below to receive a concise daily summary of the latest news and analysts’ ratings for Facebook and related companies with MarketBeat.com’s FREE daily email newsletter.