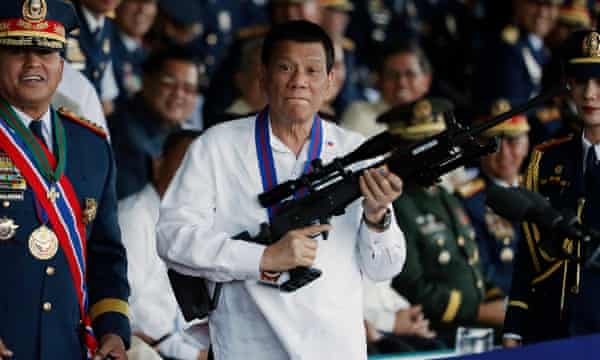 As terrible as the events were that played out on Capitol Hill on 6 January, Maria Ressa admits to feeling “a small amount of relief” about them. An ex-CNN bureau chief, and now the founder of her own news organisation, Rappler, she had spent the past two years sounding a warning about what she’d seen happen in her native country, the Philippines.

There, a Facebook-fuelled tsunami of lies had assisted an authoritarian into power. And she had seen where that had led: to opponents of the state being killed in their homes or turning up dead in ditches. As a Filipino American with a foot in both countries – she calls herself “the first of the CNN hybrids” – she was perfectly positioned to warn America about what happens when a populist president is allowed to spread out-of-control lies across a vast, unregulated tech platform. “A lie told a million times becomes a fact,” she repeated again and again.

So how did it feel to watch the lies become an actual insurrection? “I mean, it was Silicon Valley’s sins coming home to roost.” But it also meant that there now might finally be action. “I know this working for CNN for as long as I did, right? Until it’s picked up in the west, it doesn’t get attention. At least now everyone’s motivated to fight.”

Ressa has had no choice: she has had to fight. Because she’s not observing the tech dystopia from afar: she’s living it. When President Rodrigo Duterte came to power in 2016, he declared journalists criminals – a message that was taken at face value when Ressa found herself under sustained assault. First on Facebook, then in the courts when she was accused of tax evasion in 2017, and then, in 2019, “cyberlibel” – a criminal offence that carries a penalty of up to six years in jail.

When I last saw Ressa, on a fleeting visit to London in February last year, she was having to decide whether to return to Manila or not. She’d come to see her lawyers. She has a team in Manila but she is now also represented by two high-profile human rights barristers in Britain, Amal Clooney and Caoilfhionn Gallagher. This is because while the case is being heard in the Philippines, Ressa has come to represent the increasing assault on journalism everywhere.

On the evening we met, she was struggling to decide. She knew that if she returned home, she risked being trapped and tried in a country where journalism had become a crime and the rule of law has all but collapsed. We met for dinner and I told her not to go back. “I think I have to,” she said. “I just have to.” Ressa routinely brushes off the gravity of her situation but even she seemed worried. She returned and was detained days later. In June last year, she was found guilty – convicted on the basis of an article she didn’t write, published before Duterte’s cyberlibel offence came into existence. She is facing a sentence of between six months and six years, though she is now appealing against it in the supreme court.

You’d never know this from a casual encounter, though. She beams in via Zoom from her apartment in Manila, shooing her visiting niece away from her screen, and she is as smiley and upbeat and warm and solicitous and welcoming as ever. We’ve crossed paths a number of times and whenever I see her, in whatever circumstances, she always radiates the same positive energy. Even now, with nine criminal cases outstanding and 10 arrest warrants, she’s almost ridiculously upbeat.

However, the situation in the Philippines is still ominous. Duterte continues to flout the rule of law. When I ask Ressa how things are, she tells me about the recent “Bloody Sunday” in which seven activists were killed in their homes after police came knocking at 5.30 in the morning. Her legal appeal is being heard in what Amnesty calls “a climate of impunity” which has seen at least 61 lawyers killed.

It’s because of Facebook that Ressa and I came into contact. For two years, she was almost constantly on the road, because for her, telling the world about the dangers of Facebook has also been about survival. She knows her best chance of protection is the attention of the world. And it’s why on 23 April, PEN is bringing her to speak at the Bristol Festival of Ideas.

Almost the first words Ressa said to me were: “We have to talk about Brexit.” Because the election that brought Duterte to power took place just weeks before the EU referendum and, she said, foreshadowed it in striking ways, not least in the troubling role that Facebook played.

The Philippines was, she says, “the first of the dominoes to fall”: the first election of 2016 in which Facebook helped facilitate a corruption of the democratic process.

For years, Ressa hopped between big news organisations: from being the head of news at the biggest broadcaster in the Philippines to a bureau chief and investigative reporter for CNN. But in 2012, she set up her own online news outlet, Rappler, a young upstart that deployed all the tricks of social media to engage its audience.

And in the summer of 2016, it was her team who carefully studied data and traffic and began to notice a network of fake accounts in the news landscape. At first, they didn’t understand what they were seeing. And then they realised: it was a massive, online propaganda operation being run by the Philippines state, fake accounts spreading fake news about fake incidents. “I saw the data as we gathered it in and I was like, oh my God, it was like seeing the heart of darkness.”

Her first thought was to tell the tech giant. “We had a good relationship with Facebook and so I showed it to them because we didn’t really understand it at first. But we realised that Facebook didn’t understand it either. And then by about September 2016, we realised that the people being attacked on Facebook were the ones who were questioning Duterte’s drug war. It was an information operation being run by the government.”

Bodies had begun to be found on the streets. A programme of systematic killings had started as part of Duterte’s war on drugs, which Ressa and her team realised was being mirrored online. Critics were being attacked on Facebook by coordinated, government-run accounts. There were zero degrees of separation between online violence and the real world. “And we still didn’t publish it. I went back to Facebook and there was radio silence. So eventually we published.”

What happened next was as predictable as it was devastating: it was Ressa who came under attack. She was swamped by an onslaught of online threats. “It was so intense. I just didn’t know what was happening.” When her younger staff started getting them too, she got security and counselling. “You have to. It screws with your head.” Her CNN training abruptly kicked in. “My heroes are Captain Kirk and Mr Spock and my years on air with CNN taught me to step back and tamp down your emotions so you can understand what’s going on. And then be ready with three bullet points.”

For Ressa, the answers lay in the data. It’s part of her process. She found swarms of government supporters flooding Facebook with #UnfollowRappler. And she could see the effect. How the fake accounts reduced their followers and throttled their traffic. She could quantify it.

Context is everything, but social media is breaking down context

For almost a year, Ressa tried to lobby Facebook to action behind the scenes. In spring 2017, she was invited to lunch with Mark Zuckerberg at Facebook’s annual developers’ conference in San Jose. She explained to him how powerful his platform was in her country. Facebook’s “Free Basics” – the programme that allows mobile phone users to access Facebook (and the internet) for free – means that for many Filipinos, Facebook is the internet: 97% of Filipinos, she told Zuckerberg, are on it. “‘What happened to the other 3%?’ he said. And he was serious! He wasn’t joking!”

Eventually, she gave up asking nicely and started to speak out publicly. “Do you blame Facebook for what’s happened?” I texted her in February last year. “I do,” she texted back. “It’s the same messages that were seeded on Facebook in 2016, #ArrestMariaRessa – Maria is not a journalist, she’s a criminal … a lie told a million times becomes a fact.”

The seriousness of her situation has forced Ressa to action. In the time I’ve known her, the language she uses to describe herself has changed. She is still a journalist but she now also considers herself an activist, traditionally a dirty word in US journalism, which is dominated by the idea of “objectivity”.

“You know the phrase I always use is that when it’s a battle for facts, journalism is activism. But actually I went back over history, and journalism has always been activism. Our goal is to hold power to account. That’s always been part of the mission.

“And when I was at CNN, I would always say that objectivity is a myth. Because it depends on who you are. I replaced a guy who was six foot two, and he was white, Anglo-Saxon, protestant, male. So that’s very different. I’m a five foot two Filipino American.

The first time she came out and called herself the a-word was at a journalism conference in the US.

“And you could hear a pin drop. Because these are my peers. These are people running news organisations. But this is how it has to be now. We have to call a spade a spade. Context is everything, but social media is breaking down context. And we have to bring meaning. That is our job.”

Ressa has always belonged in two worlds. Her father died when she was one and her mother left her in the Philippines while she went to the US and settled down with a new husband, before coming back for the kids. Aged 10, Ressa was air-dropped into a New Jersey suburb, barely speaking English. “I was the shortest and only brown kid in my class, four foot two surrounded by giants.” She was the outsider. And then the overachiever. She went to Princeton and then back to the Philippines on a Fulbright scholarship. She has always understood both worlds but not quite belonged to either, a role she has used to advantage in her journalism.

What I hadn’t realised until now is how Ressa’s experience of the internet has come full circle. It was as an investigative reporter for CNN that she began digging into al-Qaida’s use of social media, an assignment that gave her the idea for Rappler. “I was looking at how this virulent ideology spread, I could see how networks can be used for evil. But then I began to realise that we can actually use information cascades as journalists for good.”

For a time, she says, she “drank the Kool-Aid”. She believed social media could connect the world in the ways Zuckerberg said it would. And she still thinks it didn’t have to turn out this way. “I think they got too greedy. They’ve completely screwed the information ecosystem.”

What comes next is anyone’s guess. Ressa’s legal troubles grind on. And the world has woken up to the dangers of social media but it hasn’t yet come up with a plan to fix it. As for Facebook, Ressa despairs. “They’re never going to be able to fix it if they can’t even acknowledge it’s broken.”

The Observer is media partner of the Bristol Festival of Ideas