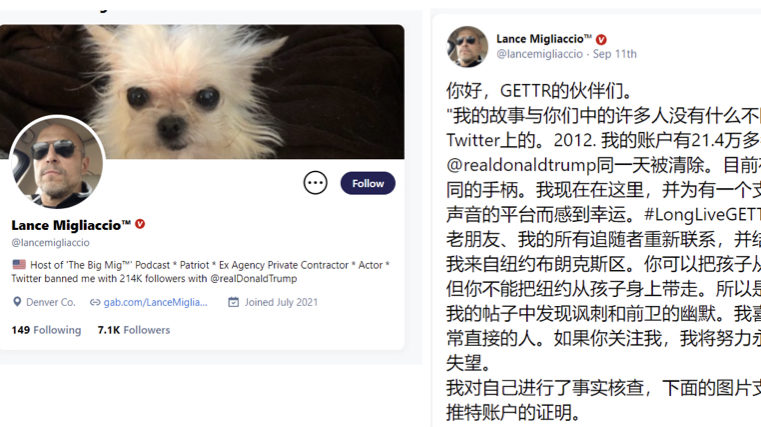 Lance Migliaccio, the actor and producer who participated in the production of Hollywood films such as “Dawn of Darkness” has recently entered “Gettr” and released an addressing speech in Chinese.

Lance says, “I come from Bronx, New York. My story is the same as many people’s. I have 210,000 followers on Twitter, but Trump and I were blocked by Twitter on the same day, and my account was permanently closed! Luckily now I am here, I find out that we have a platform that supporting of all types of voices!” Lance also posts the screenshot when Twitter closed his account on Gettr.

Lastly, Lance says, “I hope Gettr can exist in the long run so that I can reconnect with all my followers make new friends. You can take the children away from New York, but you cannot take New York away from the children.”

It is reported that since the brand new social media Gettr went online in July, the number of registered users has exceeded 2 million at this point!

Social Media News
Previous Post
Facebook shields VIPs from some of its rules: report – Manila Standard
Next Post
What a 'This person is unavailable on Messenger' error means on Facebook Messenger, and how to resolve it | Business Insider India