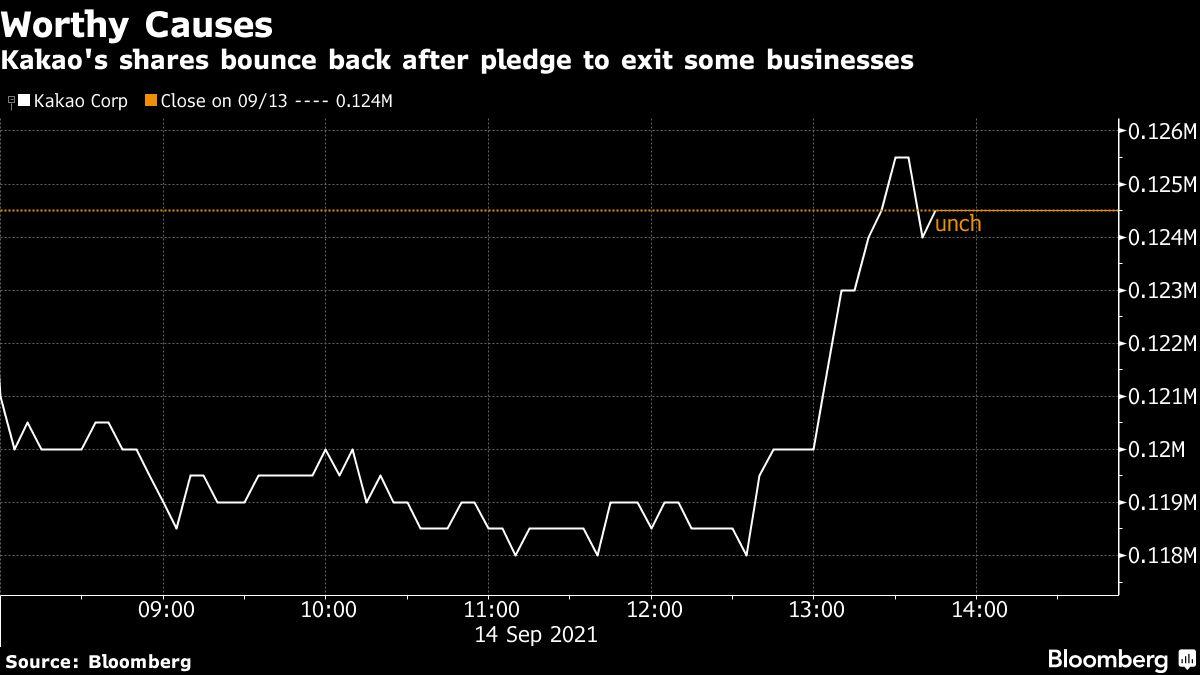 (Bloomberg) — Kakao Corp. founder Brian Kim promised to abandon the high-growth model that created Korea’s internet leader, responding to a furore over how his social media platform is abusing its dominance as “a symbol of greed.”

The billionaire entrepreneur who built Korea’s largest messaging, online finance and ride-hailing services on Tuesday pledged 300 billion won ($256 million) to help smaller merchants and to evaluate getting out of businesses that compete with mom-and-pop shops. K Cube Holdings, Kim’s wholly owned investment firm and Kakao’s de facto holding entity, will switch tack and focus on creating “social value” in areas such as education.

The concessions follow months of scrutiny over the growing role that Kakao and fellow internet giants like Naver Corp. play in Korea’s economy, particularly how their expanding portfolio of platforms from taxi services to hair-care reservations and flower delivery are beginning to squeeze privately owned businesses. The Fair Trade Commission is also investigating whether Kim failed to disclose key information related to K Cube, according to Yonhap News.

“The recent criticism is a powerful alarm bell for Kakao,” Kim said in a statement. “We’re at a point where Kakao and its units will need to seek fundamental changes for growth that will fulfill social responsibilities by abandoning strategies that we have pursued over the past decade.”

The internet giant and its main subsidiaries will establish their new fund over the next five years while it begins to exit certain businesses, Kakao said in the statement. It will expand its overseas footprint, including in North America, Southeast Asia and Japan. Kakao, which was down as much as 5.2% Tuesday, recouped losses to finish largely unchanged in Seoul. Recently listed KakaoBank Corp. climbed 8%.

South Korea has been making moves to rein in foreign and local tech firms, mirroring a months-long crackdown in China that’s erased more than $1 trillion in value off China’s largest corporations. As in Beijing, regulators and politicians in Seoul have expressed concerns about the growing power and valuations of internet firms like Kakao, Naver and Coupang Inc. after the pandemic spurred an unprecedented surge in internet activity.

This month, lawmakers warned the nation’s internet giants against abusing their market dominance in the pursuit of profits. Kakao should not follow the path of the country’s sprawling “chaebol” conglomerates in ignoring fair competition, Song Young-gil, head of the ruling Democratic Party, told a forum hosted by fellow lawmakers, Yonhap reported.

Korean lawmakers have in recent years targeted massive tech and industrial complexes like Samsung Electronics Co. over poor corporate governance and corruption scandals. But this year, they’ve begun to set their sights on the internet sector, which has grown to rival the traditional conglomerates in terms of corporate power and market value.

The growing criticism had cast uncertainty around a pair of IPOs that Kakao is trying to complete.

Kakao Mobility, its ride-hailing arm, has asked banks to delay submitting IPO-arranger proposals by a week to Friday, according to the Maeil Business Newspaper. And Kakao Pay may postpone its $1.3 billion debut after the company halted some services at the request of regulators, the Seoul Economic Daily reported. A Kakao Pay spokeswoman said the company remained in discussions with the Financial Supervisory Service but nothing has been decided on changes.

Subscribe now to stay ahead with the most trusted business news source.