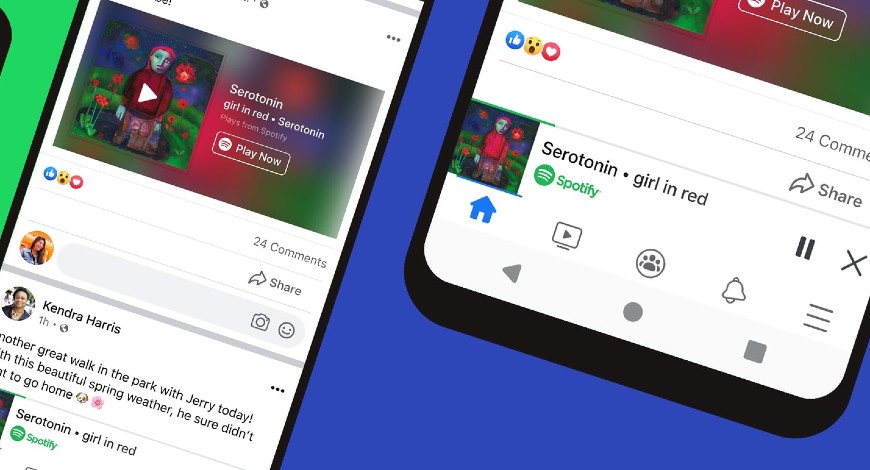 Spotify launches integrated miniplayer on Facebook for users in India

Spotify on Tuesday announced the launch of its integrated miniplayer in India.

The audio streaming platform had partnered with Facebook, to introduce a new integrated feature on both the apps through a miniplayer experience earlier this year. The feature allows listeners to listen to audio from Spotify directly within Facebook, without switching between apps.

Available on both iOS and Android devices, the miniplayer enables users to listen to songs and episodes with full playback directly from Spotify inside the Facebook app.

This feature is now available to users in India.

Free users can also use the feature with accompanying ads from Spotify.

Discovering music
“The width of Facebook’s reach in India, and the depth of content on Spotify will enable millions of listeners to discover new music and voices,” Spotify said in an official release.

Akshat Harbola, Head of Market Operations at Spotify India said, “Over the years, social media has undeniably emerged as the primary way we connect with each other, and it’s also where we discover pop culture and content. Spotify and Facebook’s new miniplayer experience is another way for us to provide a way for listeners to share their moods and moments during the day with their family and friends, and to sample what others are listening to.”

Paras Sharma, Director, Media Partnerships, Facebook India said, “Everything that we do around music on Facebook is focused on building community and connections for artists and fans. We are excited to partner with Spotify on this launch and will continue to work with the music community to build unique social experiences for our users.”

In order to launch the miniplayer, users can tap the “Play” button on an audio which has been shared from Spotify to the Facebook newsfeed.

The first time a user is using the miniplayer, they’ll see a consent dialog open. They can click on “Connect” to continue.

If they’re logged in to Spotify, the apps will automatically switch, and playback will start from within the Spotify app.

Spotify keeps playing even if a user keeps scrolling down their newsfeed, but they’ll have control over playback options so they can pause or dismiss the miniplayer.

Free users can also stream songs and download podcasts onto their wearables. The Hindu BusinessLine