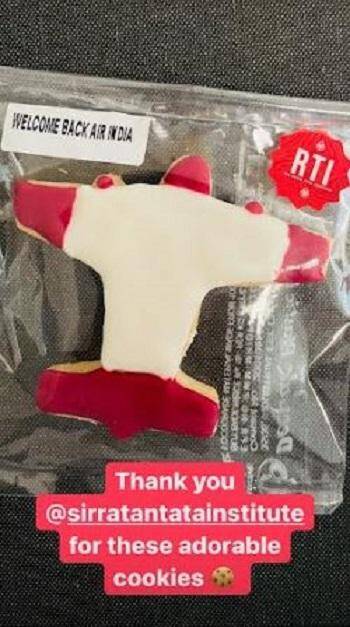 Ratan Tata shared an image, which showed a flight-shaped cookie, colored in the red and white colors of Air India

Sir Ratan Tata Institute is a non-governmental organisation (NGO) based bakery located in Mumbai. This bakery was established by Ratan Tata’s wife Lady Navajbai Tata in 1926 in the memory of Sir Ratan Tata, with the objective of providing livelihood to poor women of the community through meaningful employment.

In 1932, Navajbai became the Chairperson of the Sir Ratan Tata Trust. and a key member of the Tata Sons board. With the help of the trust’s resources, Navajbai undertook several initiatives to alleviate poverty and improve the quality of life of the economically challenged, by designing programmes and mobilising funds for medical treatment.

Tata Sons will hold its board meeting on Tuesday and is likely to discuss the winning of the Air India bid and the group’s plans for the carrier, while other matters on the agenda include the group’s digital foray and progress on the super app, sources close to the development told The Financial Express. It may be noted that Air India will be the third airline brand under Tata Sons. The firm already owns 84 per cent stake in AirAsia India and 51 per cent in Vistara.

Earlier last week, the day Tata Sons won the bid to buy Air India, Ratan Tata tweeted an old photograph of the company’s former chairman JRD Tata getting down from an Air India aircraft. He said: “Welcome Back, Air India… The Tata Group winning the bid for Air India is great news. While admittedly it will take considerable effort to rebuild Air India, it will hopefully provide a very strong market opportunity to the Tata Group’s presence in the aviation industry”.

Financial Express is now on Telegram. Click here to join our channel and stay updated with the latest Biz news and updates.