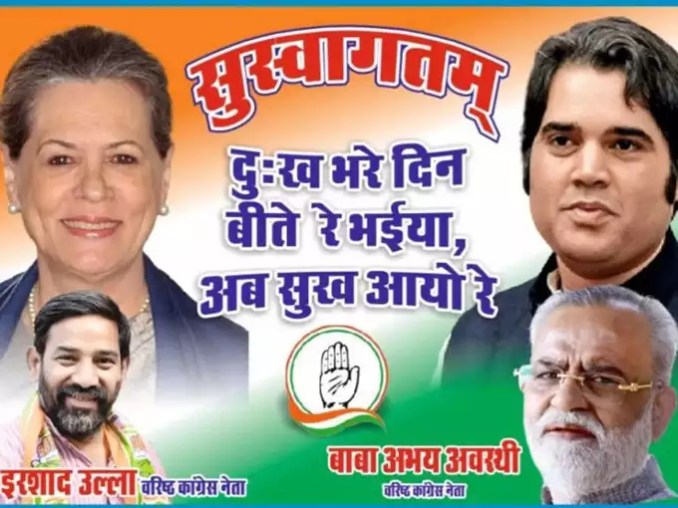 Varun Gandhi’s welcome poster reads, ‘Sad din bhete re bhaiya ab sukh aayo re’. It has a photo of Congress President Sonia Gandhi along with Varun Gandhi. Below is the picture of Irshad Ulla and Baba Abhay Awasthi. Both have been described as senior Congress leaders.

Did Varun Gandhi and Chaudhary Birender Singh leave the National Executive because of the ‘revolution’ on Twitter?
Can Varun Gandhi leave BJP?
In view of Varun’s rebellion, there is speculation that he may leave the BJP. Recently, a screenshot of his Twitter profile also went viral, saying that he has removed BJP from his Twitter bio. Varun Gandhi’s close friends, however, denied this and clarified that Varun had never written the name of the party in the bio.

Varun Gandhi: Varun Gandhi got punished for his rebellious attitude! Leaf cut from BJP executive list, now what is the plan ahead?
What is the reason for Varun’s displeasure?
According to sources, Varun Gandhi is very angry with the constant neglect of himself and mother Maneka Gandhi and that is why he is making rhetoric by going beyond the party line. This time Varun Gandhi was also being discussed in the cabinet expansion of Modi government but he was not included. Apart from this, Varun Gandhi was not given any important responsibility in the UP elections to be held next year.

Social Media News
Previous Post
Twitter down for some users in India, Downdetector shows – The Economic Times
Next Post
What exactly social media agencies in Mumbai will do for you? – Mumbai, India