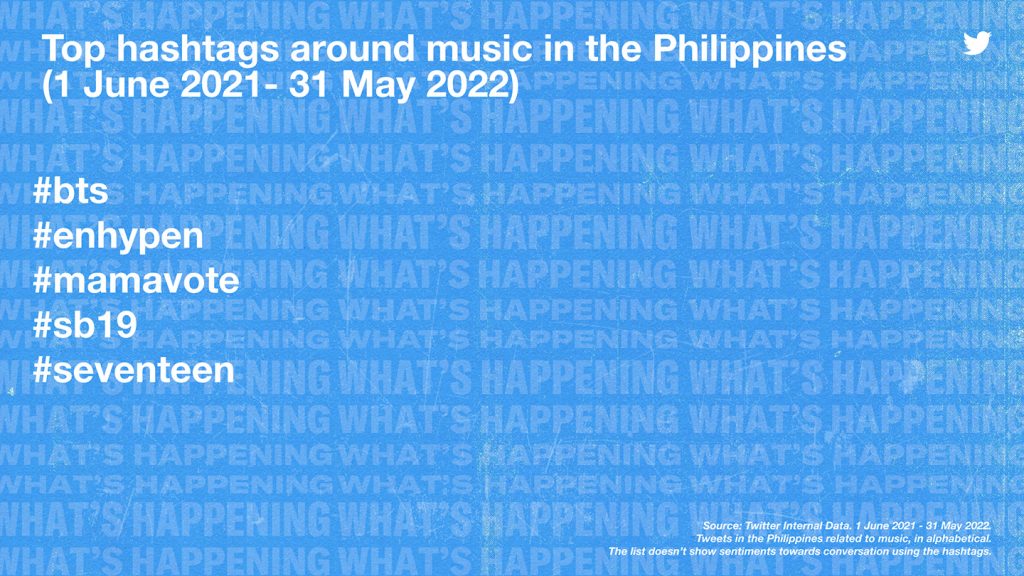 MANILA, PHILIPPINES — This World Music Day happening on June 21, communications company Twitter is bringing back #TweetYourMusic campaign to highlight local musicians and music communities across Southeast Asia. The music community of music lovers alone contributed to 4.3 Billion conversations on Twitter from June 2021 through May 2022 across Southeast Asia. This was a 21% year-on-year increase from the year before; with the most conversations coming from Indonesia, the Philippines, and Thailand.

Twitter is where people go to form passionate communities, have conversations with others with common interests and passions, and find out #WhatsHappening. From sports to entertainment, culture to current affairs, Twitter is where like-minded creators and fans can stay connected, no matter which part of the world they are in and no matter what occasion it is. And of course, music was one of the vibrant communities that have been thriving on Twitter.

In the Philippines, there were almost 1.4 Billion Tweets around music, as Filipinos enjoy jamming to the hits like “Stay” (The Kid LAROI and Justin Bieber) and “Zoom” (Jessi) which dominated the charts (and were belted out in our showers). P-pop boy group SB19 (@SB19Official) also stayed at the top and Donny Pangilinan (@donnypangilinan) continues to set the trend thanks to Filipino fans who unceasingly show their support on Twitter.

The past year has also been busy for Filipino singer-songwriter, and producer Zack Tabudlo (@zacktabudlo) for releasing hit songs like ‘Pano’, ‘Asan Ka Na Ba’, and ‘Habang Buhay.’ Ben&Ben (@BenAndBenMusic), an award-winning 9-members band in the Philippines, was also busy doing collaborations with different local artists and bands like Munimuni, Zild Benitez, and Moira Dela Torre among others. Not mentioning the release of their album, ‘Pebble House, Vol. 1: Kuwaderno.’

#Kpop continued to be the all-time music genre that generated the most chatter on Twitter, with BTS, Enhypen, and Blackpink being the top three. BTS (@BTS_twt), takes the spot in the top music-related handles in the Philippines – with the band’s on-site concert ‘BTS PERMISSION TO DANCE ON STAGE’ in Korea and in Las Vegas followed by the release of its comeback album ‘Proof.’

Filipino music fans on Twitter also showed their support for their favorite K-pop and P-pop bands, and international and local artists through hashtags. Here are the top hashtags related to music in the Philippines:

“Now more than ever, people crave connection with one another and Twitter has helped bridge the gap among fans and also between artists and fans. With 4.3 billion Tweets on Twitter in Southeast Asia around music alone and 1.4 billion in the Philippines, music is a unifying force that connects people across the region,” said Carl Cheng – head of entertainment partnerships, Southeast Asia and Greater China, Twitter.

#TweetYourMusic will celebrate local musicians, their journey, and the fans that support them with a series of fun and creative activities on Twitter. Across Southeast Asia; different fan bases will have the opportunity to participate in daily music trivia through Twitter Polls, and get to hear some of their local musicians’ journeys and inspirations live on Twitter Spaces:

As early as four years old, Ace Banzuelo started singing, performing in large crowds and audiences, auditioning, and appearing on TV shows. He is a self-taught singer-songwriter and music producer. He was a winner at a songwriting competition in Laguna, Philippines and this opportunity made him realize how much he wanted to share his music with the world. One of his popular songs today is ‘Muli’ with almost 12 Million streams.

“Music is everything to me. My passion for music definitely keeps me sane, I’m nothing without it. I’ve been a musician/performer my whole life and I’d like to keep it that way.” Ace also shared that he goes to Twitter “to connect with fans and the music community. It’s very fun to engage with audiences who talk about your work.”

Dane Aguirre is called to be the “Ariana Grande of the Philippines” because of her excellent impersonation and posting covers of Ariana’s songs. Dane is also the host of SinGaling, a Filipino singing reality game show broadcasted by TV5. For Dane, music personally is an art form— a craft to express one’s thoughts with tune. She stands that it expresses thoughts or moods one cannot say out loud.

“Twitter is an open space where it connects you to different people with common interests, leading from one thing to another and you get to start threads that could spark up conversations aka a ‘Twitter thread.’”

Jikamarie is a 22-year-old Filipino R&B singer who penned the hit ‘Lutang,’ her first-ever song which was released in August 2021. A few months after, the song topped Spotify Philippines’ Viral 50 playlist. Prior to that, she has been active in uploading song covers on her social media accounts.

“When I write and compose my music, I ask my siblings to listen to them to get some feedback before releasing them. Even after release, my followers’ feedback matters to me. I can intimately communicate with my followers about my music, through Twitter.” Jikamarie advises new artists how important it is to connect with their audience, “as the main consumers of your music, it’s only right that they get firsthand messages from you and vice versa so that aside from music, there is a strong bond between you and them. After all, in your journey in music, they are the ones who are going to be with you all throughout.”

The Filipino rapper and R&B singer, Jerald Mallari or also known as JRLDM, dropped his work ‘Patiwakal’ and its music video that captured attention on the Philippine internet. Coming from the province of Bataan, Philippines, JRLDM was fond of listening to OPM songs on the radio, his brothers’ beatboxing, and family karaoke.

He believes that music is like a religion – “it makes people unite and it expresses something one can only hear and not see.” He uses Twitter to share his thoughts and wisdom his fans can relate to.

Matthaios is a young Filipino rapper, one of the pioneer artists of MIDA$ Records, and founder of the record label Offended by Passion’Records. He is known for his popular song ‘Catriona’ named after Catriona Gray, Miss Universe 2018. As early as 15 years, Matthaios already found his passion for music and has since been committed to contributing to the industry up to today.

He is inspired to continue to share his music and inspire other young artists like him, “always make sure that you love what you’re doing. If all else fails, love will always prevail. If the money or fame is not coming in, your love for your craft will keep you going. As long as you’re not stepping on other people, you’re good.”

Meriel De Jesus, mostly known as mrld, is a Cebuano teen singer-songwriter and looking forward to realizing more acoustic pop and mellow music. She writes her own songs and releases them on huge music platforms. For mrld, her music is about how she’s able to connect with her audience’s emotions. She was also featured on a billboard at Full Volume in Time Square.

“My mind is basically the painter and the songs I put out are the art. Now, I really want to write about what I went through as a teenager. My dreams, the youth, everything,” mrld shared. “Twitter is a huge platform. I sometimes find my inspiration through a stranger’s Tweet or from the people I look up to. But nothing compares to the never-ending love that my supporters give me. A Tweet from them saying that they enjoy what I do is like a huge pump of motivation to continue what I’m doing.”

Born and raised in Davao City, Paul Pablo has a unique sound of electro-pop, synth-pop, indie, disco, and R&B. With his two major hits, ‘Bangin’ and ‘Kalawakan,’ he reached one million streams on Spotify. Paul was also named as ‘MYX Spotlight Artist’ for August 2021 which opened doors for his career. He wants to be able to use his platform to inspire the LGBTQIA+ community and raise the rainbow flag higher through his songs.

As a young artist, Paul wants to become a part of the evolution of OPM and prove that his generation is capable of producing such music, “my music represents the future. I enjoy making new things, and music is a big part of that. I’m currently combining “hugot” lyrics with an electro-pop sound we call ‘hugotronic’.” He goes to Twitter to interact with his fans and Tweet about his music, a few life updates, and of course his upcoming releases. “I believe that people on Twitter appreciate art in all forms, including my music. I’ve met new listeners and fans who found me through Twitter.”

Raven is a 21-year-old Filipino singer-songwriter, open-genre musician, and producer from Cavite. He is mostly into lo-fi hiphop, and folk-indie-pop-rock. Raven debuted his single ‘Paraluman’ produced by Rico Blanco.

He believes that music is like his best friend that he can share and open his emotions with, and uses Twitter to get inspiration when writing songs. Raven also wants to tell his fans and aspiring artists to not stop pursuing their dreams.

For them, being on Twitter is also about building their relationships in their community, finding their audience, and most importantly communicating with their fans. They can also unleash their creativity through their Tweets and update their audience about anything related to their lives.

Zack Tabudlo is a singer-songwriter, musician, and producer. He joined Bamboo’s first season of The Voice Kids Philippines, a reality singing competition broadcasted by ABS-CBN. The consequent releases of his singles and debut album, ‘Episode,’ kept Zack on top of the Spotify charts – The Philippines Top 50 chart and Global Viral chart.

“The Twitter world is such a big and diverse world of expression from one person to another. Communities and groups come together through Tweets. Interaction has been one of the key things I love when I use Twitter with fans.” He also shares that he uses Twitter to communicate with his fans as well as gaining feedback from his newly released tracks and what his audience wants to hear from Zack next. 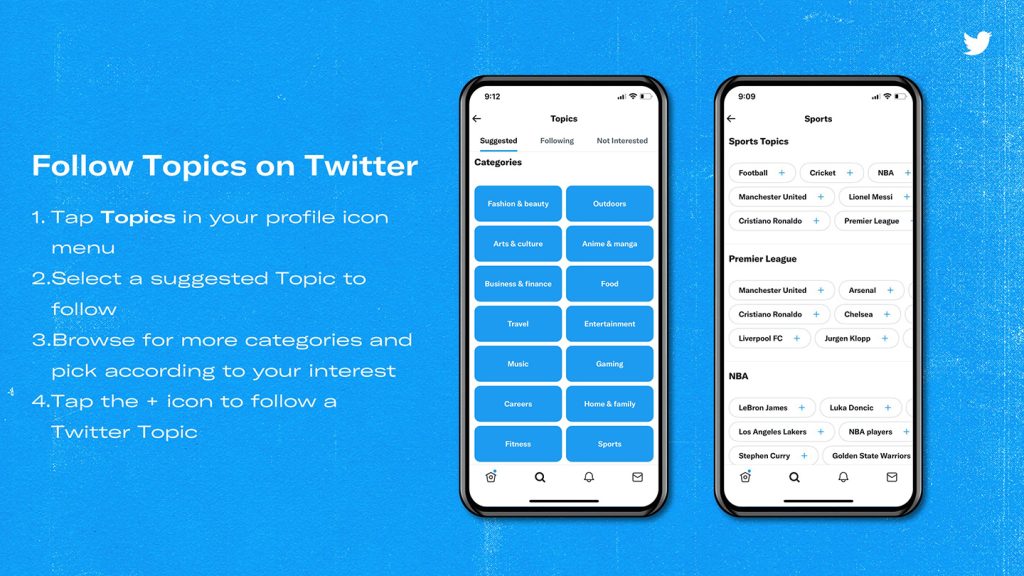 In the Philippines, there will also be fun activities throughout the week of World Music Day, such as music polls. From casual listeners to dedicated stan, everyone can join in. With Twitter Topics, fans can easily find the conversations that mattered most to them – be it the latest collaboration between Adie (@Adadieee) and Janine Berdin (@janineOTOT) for ‘Mahika’, Ace Banzuelo (@acebanzuelo) slaying the charts with ‘Muli’, or the newest cover drop of Gigi De Lana (@GigiDeLana).

Stay tuned to #TweetYourMusic this World Music Day and participate in the fun activities planned. Follow @TwitterPH to be part of the conversation.