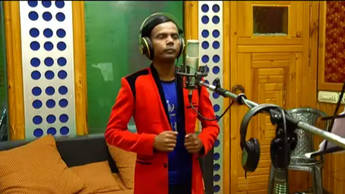 Subversion
or incompetence? Parody or imitation? These are all valid questions to ask of Bangladeshi
social media sensation ‘Hero Alom’. But Alom won’t have any answers. He says he
just wants to sing. And if God has given him this voice, then its his right to
sing even if he sounds bad. But the Bangladesh police won’t let him. The man
with nearly two million Facebook followers and nearly 1.5 million YouTube
subscribers was picked up by the police because of his songs.

A woeful
Alom told AFP that he was “mentally tortured” by the police last week who asked
him to stop singing songs by the eminent poet and songwriter Rabindranath
Tagore and Bangladesh’s national poet Kazi Nazrul Islam. His crime: singing out
of tune.

Also Read | Why Chinese vlogger Tizzi is in trouble with authorities

His unique
crooning style borders on the absurd and it is in the realm of the embarrassing
absurdity where he thrives. His original songs have titles such as ‘Girlfriend
De Na’ (Give me a girlfriend) and ‘Teler Dam Varlo Re Bhai’ (Fuel prices have
increased) and ‘Nitto Ponner Daam Beshi (Everyday things turn expensive). In
one of his songs called ‘Arabian Song,’ Hero Alom is clad in traditional Arab
gear and as he walks through sand dunes, superimposed camels crowd the
background.

Critics’
scorn with regard to Alom singing classics of Bangla music is what got him in
trouble with the cops. “The police picked me up at 6 am and kept me there for
eight hours. They asked me why I sing Rabindra and Nazrul songs,” Alom told
AFP.

Harun ur
Rashid, the chief of detectives in Bangladesh capital Dhaka, told the media
that Alom had apologised to the police for singing the cherished songs and for
wearing police uniforms in his videos. “We received many complaints against
him,” said Harun.

Following
his run-in with the cops, the 37-year-old social media sensation released a new
video which showed him depicting himself behind bars in a prison. The treatment
received by the singer triggered a wave of outrage on social media. “Don’t be
broken. You are a hero. No matter what others say, you are a real hero,” said
Sanjida Khatun Rakhi on Alom’s Facebook page.

Asked why
he added the moniker ‘hero’ to his name, Alom said, “I feel I am a hero. So I
took the name Hero Alom. I won’t drop this name no matter what.”