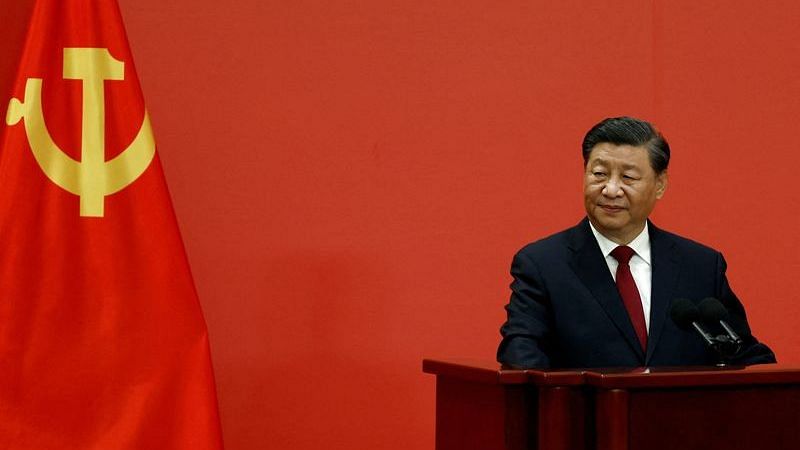 If there is a topic that brings Chinese officials around for a serious discussion, it’s climate change. In the Egyptian city of Sharm el-Sheikh, which is hosting the COP27 climate summit, China’s pavilion is decked in traditional themes, with books on governance by President Xi Jinping on display.

The Chinese delegation to Sharm el-Sheikh, led by the vice minister of ecology and environment Zhao Yingming like the last time, consists of 50 people. But Xie Zhenhua, China’s special envoy for climate change, is Beijing’s public face at COP27.

One of the top agendas that China has brought to COP27 is compensating poor countries for damages because of global warming – a thorny topic at past COP meetings.

“I hope the conference this time will meet the demands of developing countries as much as possible, as it is held in Egypt, a developing country,” Xie Zhenhua said on Sunday during an event at the Chinese pavilion.

So far wealthy nations have failed to deliver the $100 billion per year pledge to assist economically disadvantaged countries – a pledge that goes back to 2009.

While calling on rich countries to pay their ‘fair share’ to address climate challenges, Xie said China has “actively implemented” its commitment made during the Paris Agreement.

Despite these overtures of remaining committed to climate change mitigation, Beijing ensures that it reminds everyone about its developmental goals through ‘Chinese-style modernization’.

“In the future, China will speed up the pace of building a Chinese-style modernization in which man and nature coexist in harmony, accelerate the formation of green production methods and lifestyles that are conducive to pollution reduction and carbon reduction, and actively participate in the process of global climate governance” Zhao added.

Xi Jinping has alluded to bringing fairness to climate response.

“The new environmental protection targets we set need to be ambitious on the one hand and pragmatic and balanced on the other so as to make the global environmental governance system fairer and more equitable,” said Xi.

Xi has made a connection between the recently proposed Global Security Initiative and the need to address non-traditional security challenges, including climate change.

China and India’s approach to international cooperation may appear to be different in multiple spheres, but when it comes to climate change, there are many areas of convergence.

India has repeatedly made demands for fairness in the climate justice regime. Unlike the narrative popular in some international media–blaming China and India for being the big carbon emitters–both have made bold commitments to reducing their emissions and are trying to abide by those commitments.

India has taken measures to encourage the operators of solar farms to sell energy at a low price of Rs 2.44/kWh. China leads the way in investment in energy storage batteries, electric vehicles and ultra-high transmission lines.

But despite the progress in climate change mitigation in the past few years, the geopolitical tensions between China and the US now overshadow the climate negotiations.

Following US House of Representatives Speaker Nancy Pelosi’s visit to Taiwan, China suspended negotiations with the US.

John Kerry, US Special Presidential Envoy for Climate, has indicated attempts were made to restart the climate talks with Beijing. But Xie declined to comment when asked about it in Sharm el-Sheikh.

Xi Jinping made significant climate commitments at the 76th session of the UN General Assembly.

Xi has set the target of reaching peak coal consumption by 2025 and peak carbon emissions by 2030–to meet the ultimate goal of becoming nearly carbon neutral by 2060. Xi has pledged to stop building new coal-power plants abroad.

As energy demand rises in China, driven by people living under Covid-related lockdowns and factory production attempting to bounce back, the reliance on coal to plug the energy gap isn’t falling but rising. The Russia-Ukraine conflict has also fuelled energy shortage.

According to Reuters, China is struggling to secure core supplies for mid-November and early December. “The average coal stocks at major utilities reached a level equivalent to 25 days of use in late October,” reported Reuters, citing data from China Electricity Council.

“Since the United States and the EU have imposed an embargo on Russian oil and gas after the outbreak of the Russia-Ukraine conflict, the current energy crisis in Europe has forced many countries to fall back to traditional energy sources such as coal,” said an op-ed by Xinhua with no byline.

The climate challenge and ‘Chinese-style modernization’ may appear to be at odds with each other, but that’s not how Xi Jinping views the direction of the Chinese developmental state.

“First, we shall take the development of ecological civilization as our guide to coordinate the relationship between man and nature. We need to solve the problems brought by industrial civilization, keep human activities within the limits of the ecology and environment, and carry out holistic conservation and systematic governance of mountains, rivers, forests, farmlands, lakes, grasslands, and deserts,” said Xi in his speech.

‘Ecological civilisation’ is a signature concept proposed by Xi himself. But as the Chinese economy goes through a rough patch, remaining committed to ecological balance along with GDP growth will be an uphill battle.

In modern Chinese imagination, manicured houses of the Yi ethnic minority in Yunnan often feature while describing China’s climate commitments. But the rosy picture of dancing ethnic minorities in harmony with a pristine environment is overshadowed by complex climate negotiations at events like COP27.

Climate change regularly features in public debates on Chinese social media – though with its limitations. The hashtag “COP27” was viewed 17.4 million times on Sina Weibo.

China appears to be committed to seriously combating climate change, but as with everything else in Zhongnanhai, politics trumps all good intentions.

As the world’s two largest economies are not looking eye to eye over climate talks, the progress made on climate commitments over the last few years is in jeopardy.

If the US and China relations are to resume, climate change will likely be the topic that breaks the logjam. But as we have seen with Beijing’s narrative on the Russia-Ukraine war, it will not compromise on ‘national interest’ to advance climate change-related goals.

The author is a columnist and a freelance journalist, currently pursuing an MSc in international politics with a focus on China from School of Oriental and African Studies (SOAS), University of London. He was previously a China media journalist at the BBC World Service. He tweets @aadilbrar. Views are personal.