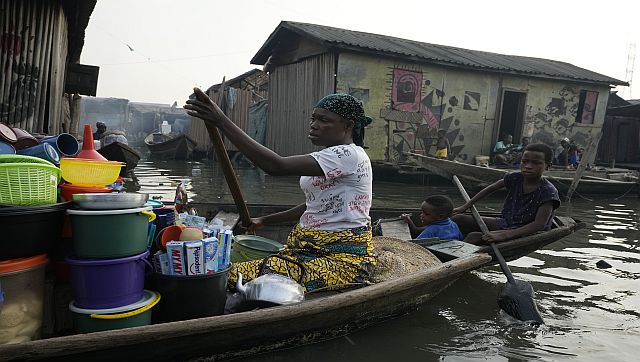 COP27: Who are the movers and shakers of climate finance?

The United Nation’s 27th annual climate summit, COP27, opened on Monday in Sharm el-Sheikh, Egypt. The event, which should pressure governments into ramping up their decarbonisation pledges, will be the first to put the issue of financial compensation for damages suffered by developing countries at the top of the agenda. What is at stake and who are the movers and shakers of climate finance?

Key to understanding this issue is the question of the 100 billion dollars. The figure refers to the pledge put forward by US President Barack Obama in December 2009 as negotiations threatened to break down at the ill-fated summit in Copenhagen.

He proposed that rich countries pay US$100 billion per year from 2020 onwards to finance mitigation and adaptation policies in developing countries.

At the time, this had less to do with “North-South solidarity” than the US president’s attempt to secure emission-reduction pledges from major emerging countries. Led by China, none caved in.

According to the OECD, 13 years later the pledge is on the cusp of being met. But developing countries greeted the news with some scepticism. In fact, the sum consists mostly of loans rather than grants. Nor is it clear if this will be a transfer of development aid or additional funds. Whatever the answer, recipients are likely to have next to no control over how the funds are used.

As early as the first COP, held in 1991, a negotiation bloc made up of island states vulnerable to rising sea levels — the Alliance of Small Island States (AOSIS) — recommended an “international financial compensation mechanism for loss and damage associated with the adverse effects of climate change”.

A woman travels by canoe in the floating slum of Makoko in Lagos, Nigeria. A study published in 2018 estimated the ‘losses and damages’ at no less than $290 to $580 billion per year by 2030. AP

Twelve years later, a first version saw the day at the COP19 in Warsaw. In 2015, the UN’s overarching deal, known as the Paris Agreement, nevertheless specified it was a tool for cooperation, not compensation.

A “dialogue on loss and damage for the most vulnerable countries” would finally have been brokered at COP26 in Glasgow (2021) (the so-called “Glasgow Climate Pact”).

In recent years, countries from the Global South have pushed for a financial mechanism to compensate for damages to be launched at COP27. But the United States and Europe never wanted it and will not support the creation of a new fund. Instead, they will argue in favour of strengthening existing institutions.

In climate negotiations, it is essential to understand the overarching concept of “common but differentiated responsibilities”. Enshrined in the 1992 Climate Convention, it points to industrialised countries’ historical responsibility in the climate crisis. Here again, the United States has long opposed the principle.

Until now, it has exempted the countries of the South, including China, from any obligation to reduce emissions. In the past years, it has incorporated the issue of financing adaptation and financial compensation for damages suffered by the Global South.

Economist Olivier Godard has noted the historical responsibility of industrialised countries is not as simple to make out as it might seem, be it on legal and moral grounds or even statistics.

Emerging and developing countries beg to differ, however. As early as 1991, the South Centre, a think tank of countries from the Global South, indicated that industrialised countries had long pre-empted the global environmental space, something made clear by a glance at relative cumulative emissions.

Current generations would therefore have to repair the damage caused by the behaviour of their forebears.

To appreciate this at a quantitative level, the graph below shows annual and cumulative greenhouse-gas emissions of industrialised countries (known as the Annex 1 group in the Climate Convention) and developing countries, including major emerging economies such as China (the non–Annex 1 group).

As a result, while the emissions of industralised countries were twice those of the “developing countries + China” group in 1980, today the situation has been reversed.

For cumulative emissions — those that could measure historical responsibility — before the full spread of the industrial revolution in the North in the late 19th Century, the emissions of the countries of the South dominate.

The landscape continued to change dramatically until 1980, when the share of Northern countries’ emissions reached its peak, 70 per cent.

Since then, it has declined due to strong economic growth of emerging countries. Today, it is still above 50 per cent, but in fewer than 10 years, the combined emissions of developing and emerging countries will exceed those of industrialised countries. Historical responsibilities will then be shared equally.

Prior to 1990, basic conditions for the historical-responsibility argument were not being met. Previous generations were not aware that greenhouse-gas emissions would alter the climate, so it was impossible to blame them and, by extension, to make subsequent generations responsible.

And it goes without saying that current generations have no capacity to sway the past generations’ energy and development choices.

Moreover, the acceleration of economic growth in emerging countries since the 1990s has seen emissions soar. As a result, their emissions have increasingly exceeded those of the Annex 1 countries for the past 20 years.

When it comes down to individual responsibility, however, per capita emissions are still much higher in the North than in the South, mainly because of the intensity of their energy consumption. The one major exception is China, where per capita emissions now exceed those of the European Union.

As we can see, it is impossible to settle the question of historical responsibility. No figure, nor any theory of justice will ever be able to establish a consensus, and this question will constitute a stumbling block for all negotiations.

It will thus be impossible to satisfy all of the demands of the Global South in Sharm el-Sheikh. A study published in 2018 estimated the “losses and damages” at no less than $290 to $580 billion per year by 2030. As global heating worsens, the annual cost of impacts could exceed $1 trillion by 2050.

Regardless of the reliability of these estimates, it is unrealistic to imagine that the United States and the European Union would take on commitments that would require them to pay hundreds of billions of dollars each year.

But no one will gain from a failed COP27. A compromise, however unsatisfactory for developing countries, will have to be found. Diplomacy is also the art of masking conflicts that will never find a solution.

This article is republished from The Conversation under a Creative Commons license. Read the original article.