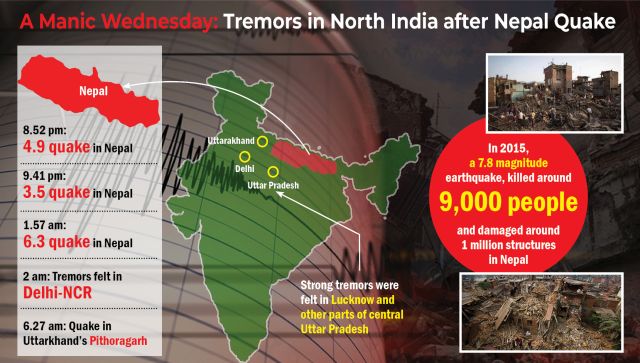 Is a big earthquake coming to Delhi?

It was a night that left Delhi shaken. Strong tremors were felt in the Capital and the surrounding region around 2 am after a 6.3 magnitude earthquake struck Nepal. They lasted for about 10 seconds, prompting many to rush out of their houses.

The tremors were also felt in Gurugram, Noida, and other parts of Uttar Pradesh. Hours later, a temblor struck Uttarakhand’s Pithoragarh.

While there were no casualties reported in India, six people lost their lives in Nepal’s Doti district.

Also read: From Nepal to China, the deadliest earthquakes that rocked the world

The tremors in Delhi-NCR, Uttarakhand

A quake hit Nepal around 1.57 am on Wednesday, the third in five hours. The first of 4.9 magnitude was recorded at 8.52 pm on Tuesday followed by 3.5 magnitude at 9.41 pm, according to the National Center for Seismology.

It did not end there. Another earthquake of magnitude 4.3 hit Uttarakhand’s Pithoragarh around 6.27 am on Wednesday. The depth of the earthquake was 5 km below the ground, National Center for Seismology said.

The tremors sent panic in Delhi and other parts of North India with many staying out of their houses for hours.

However, this is not the first time the Delhi-NCR region has experienced an earthquake. Between September 2017 to August 2020, a total of 745 earthquakes have been recorded by the National Seismological Network, including 26 such events in the National Capital Region (NCR) with magnitude three and above on the Richter scale.

In 2021, the Delhi-NCR region experienced tremors on at least five occasions after being hit by low-intensity quakes or because of aftershocks.

But why is Delhi so prone to tremors?

The Capital and its surrounding cities fall in the high-risk seismic zone. The Bureau of India Standards has classified the country into four major zones based on the macro seismic zoning map of India — Zone V (high intensity) to Zone II (low intensity).

Parts of Delhi and northern Uttar Pradesh fall in Zone IV, which is the severe category. Gujarat’s Bhuj, which was struck by a massive earthquake in 2001 in which 20,000 people were killed, Chandigarh, Ambala, Amritsar, Ludhiana and Roorkee all fall under zones IV and V, reports The Economic Times.

Delhi sits near three active seismic fault lines: the Sohna fault line, the Mathura fault line and the Delhi-Moradabad fault line. Gurgaon is on seven fault lines, making it the riskiest area in Delhi NCR. If these become active, it can cause a quake of 7.5 magnitude, the report says.

According to Professor Chandon Ghose of IIT-Jammu, an expert on earthquake engineering, earthquake centres are changing to changes in the environment. There is a change in tectonic plates. “Delhi is close to the Himalayas, which was formed by the mixing of tectonic plates such as India and Eurasia. Due to movements in these plates, areas like Delh-NCR, Kanpur and Lucknow, are most prone to earthquakes.” 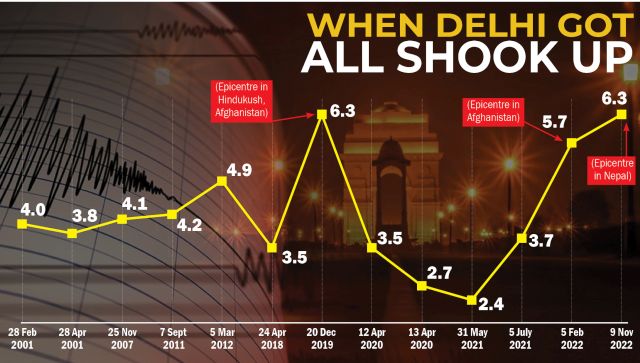 While the region continues to feel tremors and aftershocks, one of the big quakes recorded in Delhi was more than six decades ago. On August 29, 1960, an earthquake with epicentre along the Delhi-Gurgaon border rocked the Capital.

Around 75 per cent of buildings around the epicentre developed cracks and minor damages were reported to Red Fort and Rashtrapati Bhavan. Around 100 people were injured because of falling debris and stampedes. The quake was said to be 6 on the Richter scale but researchers later said the magnitude was 4.8, according to a report in The Economic Times.

If a quake hits Delhi-NCR today

Experts say that there is consistent seismic activity going on in the NCR region, which can trigger big tremors. It does not help that many parts of Delhi and the surrounding areas are highly populated.

The border towns of Delhi have seen a rise in high-rise private buildings many of which do not follow mandatory guidelines set by the Bureau of Indian Standards (BIS) for earthquake-resistant construction. The numerous illegal colonies across the Capital and the shaky construction along the Yamuna will be unable to withstand a strong tremblor.

“At Richter scale 6.0, the effect of the earthquake in Delhi would be devastating. Many buildings would be razed to dust,” Professor Chandon Ghose told Business Standard in June 2020 after ten low to moderate-intensity tremors were recorded in the Delhi-NCR Region over one and a half months.

“Everyone knows that Delhi-NCR falls under seismic zone-4, and it’s prone to tremors but still most of the builders do not conform to the norms of BIS. There is a nexus between architects and builders which somehow compromise the stringent earthquake (resistant) codes. So, on any given day, if an earthquake of higher magnitude strikes here, the consequences would be grievous,” the professor added. 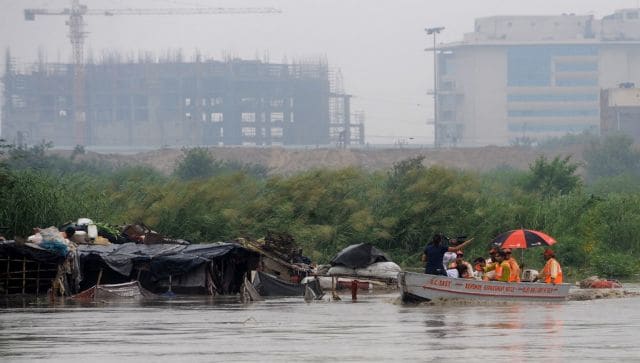 Places along the Yamuna and its flood plain will be worst hit if an earthquake jolts the Delhi-NCR region. AFP

In 2005 the Delhi government approved a United States aid project to retrofit some of its buildings with earthquake protection, including the secretariat and police headquarters. But the project was left incomplete, according to a report in Outlook.

Most structures in India ate built to prevent a collapse in case of a major quake but this does not ensure that the structure survives the disaster and can be reused immediately.

The riskiest places in Delhi

According to a report on the “seismic hazard microzonation” of Delhi brought out by the Ministry of Earth Sciences, most places along the Yamuna and its flood plains, including the highly populated colonies of east Delhi, will be the worst hit if struck by a powerful earthquake.

The Lutyens’ area, which houses the Parliament, central ministries and other important structures, also fall under the high-risk zone along with Delhi University’s north campus, Karol Bagh, Janakpuri, Paschim Vihar and Rohini. The Delhi airport and Haus Khaz fall under the second worst “high-risk category”.

The area around Delhi has the most number of seismometers anywhere in the country – 16 out of 115 installed in India. Hence, even earthquakes of a small magnitude are recorded. However, this cannot help predict a big tremor.

“A big earthquake might still occur. No one can rule it out. But they cannot be predicted. So to say that these small earthquakes are precursors to the big one is totally unscientific,” Harsh Gupta, one of India’s foremost experts on earthquakes and a former director of the National Geophysical Research Institute told The Indian Express. 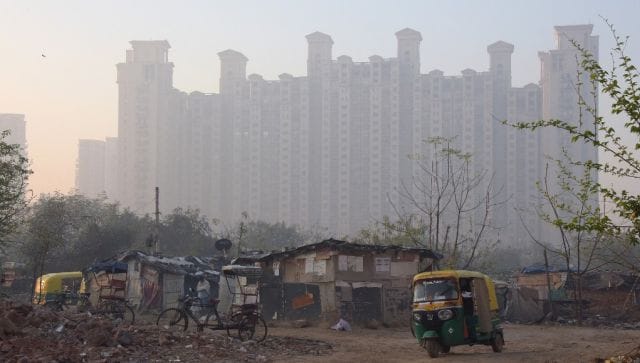 According to experts, most buildings in Delhi and Gurugram are not earthquake-resistant. AFP

He also said that the argument that smaller quakes help release the energy bit by bit so that a big one would not be necessary also does not hold. “Delhi area has experienced earthquakes of magnitude between five and six, but fortunately not in the last 50-60 years… You would need 1,000 earthquakes of magnitude 4 to release the energy equivalent of a magnitude 6 earthquake. These arguments have no basis,” he told the newspaper.