CNB shares post on Nick Carter’s emotions around brother’s death: Too sensitive to talk about too soon?

The conversation around drug use has recently been thrust into the lime light here in Singapore, and it seems as though the Central Narcotics Bureau is intent on driving the point home.

While it isn’t clear if the younger Carter’s death was due to drugs, it is a widely known fact that he suffered from substance abuse. He has attended rehab multiple times, and was also in the past arrested for driving under the suspicion of influence.

The post by CNB added, “Aaron Carter had been struggling with substance abuse. Drug abuse does not just affect abusers. The hidden victims, the ones who care for us, are affected too. Let us band together and work towards a #DrugFreeSG. #StrongerTogether #DrugFreeEverywhere”

While using trending points of conversation to drive home a message is not unseen in the media industry, communications practitioners MARKETING-INTERACTIVE spoke to say that tragedies and deaths should ideally be stayed away from when bringing forth a message.

Tarun Deo, founder of Progressive Communications said that in such situations, his advice for his clients would be to not make assumptions unless the facts are confirmed. “There are so many ways to do this effectively and with greater impact and empathy,” he said.

“Facts always come first so no one should make assumptions unless the facts are confirmed. In terms of using the communications playbook in this manner, it’s a choice communicators make. It’s certainly not the only way or the universally acknowledged right way to do this in this instance so it’s really a question for the CNB to answer,” he said.

Similarly, [email protected]’s MD Winnie Pua said given that CNB’s association of Carter’s death and his drug use is purely speculative, the Facebook note could come across as cold, opportunistic, and even exploitative because of the quote and accompanying image. According to her, timing and nuance are everything.

“I believe it should have been about mourning the unfortunate loss of a dear brother, a star brimming with talent, rather than making an example out of a drug abuser,” she said, adding:

Perhaps, because CNB will always be perceived as pushing its anti-drug agenda, it should have stayed away from any mention of Carter and instead focus on positive public education.

Pua said this could include celebrating those that have decided to step away from drug use and turn their lives around, or congratulating those that have stayed clean for a long time. In her view, that would have done CNB so much better than fear-mongering or being deemed as capitalising on a tragedy.

To ride on such tragedies to drive home a message, even if it is an incredibly important one, can be construed as being insensitive from a PR perspective, explained Jose Raymond, director of strategic advisor at PRecious Communications. Like Deo, he too would advice his clients to know all facts, toxicology reports, cause of death before making the statement.

“While we crave for a society which is safe from the harmful effects of drug abuse, knowing when and how to push the envelope, and at the appropriate time, are as important,” said Raymond.

While handling social media marketing, in a rush to news jack and leverage on trending topics to get higher engagement for our key messages, it is usual that we sometimes forget the human aspect of empathy, explained Edwin Yeo, GM of SPRG Singapore.

“What happen with Aaron Carter was tragic, and whether one agreed with his lifestyle or not, it doesn’t change the fact that it is a tragedy. Seizing on tragedy to deliver your key messages is rarely a good look, and makes you look opportunistic, even with the best intentions,” he said.

The chatter around drug use has incrementally taken the front seat in Singapore since late august 2022, when Singapore’s golden boy and Olympic winning swimmer Joseph Schooling was caught for smoking weed. The data from media intelligence company CARMA also depict a similar sentiment.  Top themes also include opium trafficking, the death penalty, impact on families of those sentenced, and the debate with Richard Branson. 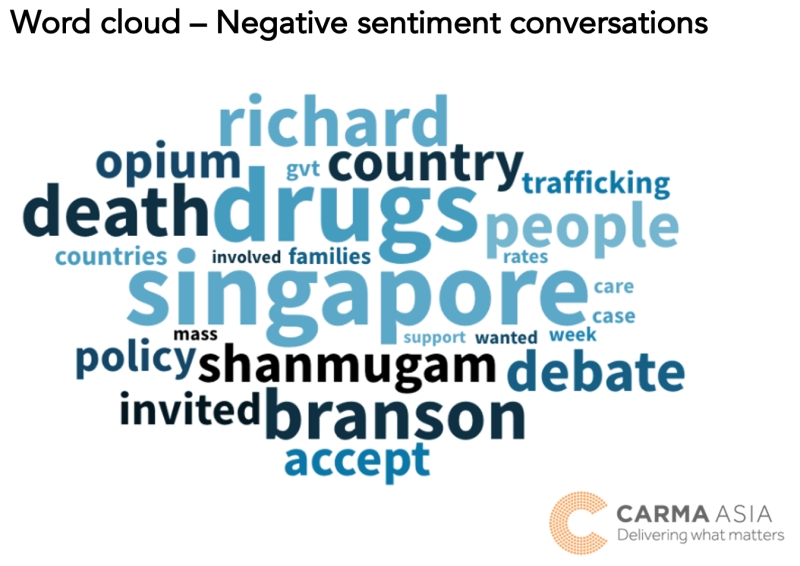 Meanwhile, recently Singapore’s Ministry of Home Affairs also made it known to the public that it will not stand for global influences commenting on Singapore’s strict drug and death penalty. MHA openly invited British business mogul Richard Branson, who has often criticised the nation’s policies, for an open televised debate. Branson’s rejection of the debate, saw MHA shooting down many of his comments while asking for him to steer clear of matters important to Singaporeans.