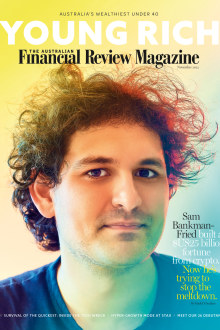 Zhao saw that selling a large amount of FFT could send its price tumbling, in turn creating a liquidity crisis across Alameda and FTX. Bankman-Fried tried to sell FTX to Zhao, but Zhao says the combination of the regulatory scrutiny FTX is now facing, and its ongoing liquidity issues, have made a deal impossible.

Bloomberg has reported Bankman-Fried has told investors the company would need to file for bankruptcy without a bailout and there are fears FTX customers now face losses. FTX’s capital shortfall could be as big as $US8 billion ($12.5 billion).

This is an extraordinary enough story on its own, and one that still has to play out.

But it seems likely that FTX is worthless, or very close to it – which is bad news for the list of high-profile investors in FTX, some of which helped the exchange obtain a valuation of $US32 billion ($49 billion) as recently as January.

Although FTX’s share registry includes two of the institutions that have become synonymous with the irrational froth of the past few years, namely Japan’s SoftBank and US crossover fund Tiger Global, it also attracted capital from some of the biggest names in global investing: passive investing giants BlackRock and VanEck, venture capital icon Sequoia and local giant Telstra Ventures, Singapore’s sovereign wealth fund Temasek and one of Canada’s pension fund giants, the Ontario Teachers’ Pension Plan.

Indeed, it was only in September that OTPP chief executive Jo Taylor told Reuters that he felt the fund had found the lowest-risk way to play in the crypto sector, because of the role FTX played in the market.

“In terms of the risk profile, it is probably the lowest risk profile you can have in that it’s everybody else is trading on your platform.”

Taylor told Reuters the investment would help OTPP learn whether the risks and rewards of the crypto market were worth it.

“I don’t think we have the answer to that question yet,” Taylor said.

To be clear, the size of OTPP’s investment, which was made last year at a $US25 billion valuation, is likely to be tiny in the context of its $C242.5 billion ($278 billion) portfolio. Given OTPP must disclose all investments over $C200 million, it’s probably smaller than that.

Still, there’s no doubt a polite discussion will be held around the OTPP board about the wisdom of using the hard-earned savings of Canadian workers for the purposes of experimentation.

(Sequoia Capital, which has rightly been mocked on social media for a fawning story on Bankman-Fried still on its website, said on Thursday that it made no apology for its $US150 million investment in FTX. “We are in the business of taking risk,” it said.

Fair enough. But an investor surely expects a very different level of risk from a venture capital firm than they do from a pension fund.)

But the biggest lesson is surely around understanding risk and how the notion of what is risky and what isn’t can change radically when the environment does.

Eighteen months ago, or even at the start of this year, the investors who piled into FTX’s capital raisings might have seen it as Taylor seems to have – a low-risk way to invest in an inherently risky sector. Rather than being exposed to volatile cryptocurrencies themselves, these investors could own a key piece of the sector’s infrastructure.

But what the likes of OTPP didn’t appreciate – or perhaps couldn’t see, given what the market has only really confirmed about the mingling of Bankman-Fried’s interests – was that FTX looked much different from your garden variety stock exchange.

Alameda, which actually founded FTX, also acted as a market maker on the exchange. And there are suggestions that Alameda was using the collateral of customers on FTX to finance its own investments; this seems credible given how quickly FTX has been overwhelmed by liquidity issues.

So the seemingly less risky investment – owning FTX as crypto infrastructure – turned out to be just as risky as owning crypto itself, for two reasons: the exposure FTX investors had to the FTP token and the unusual relationship between FTX and Alameda via Bankman-Fried.

The involvement of institutions such as OTPP in a company like FTX is a reminder that the notion of risk can change rapidly when the external environment does.

As Howard Marks told this column last week, it is often the case that seemingly safe assets are exposed as something else entirely at times of stress.

“Most things and especially new innovations, which have never been tested, can have some hidden flaw that is only disclosed when the tide goes out,” he said.

For Australian super funds, which have rushed into riskier asset classes in the past decade seeking better returns – particularly venture capital – the FTX episode should serve as a cautionary tale about both understanding risk and understanding how risks are constantly evolving.