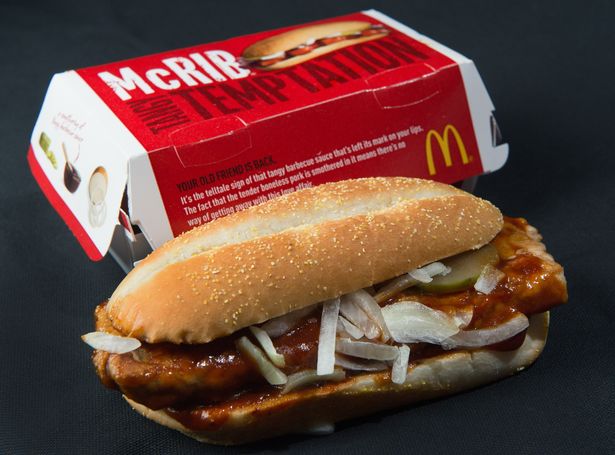 The McDonald’s menu has seen many dramatic changes over the years, with many items removed only to be brought back years later.

Earlier this year, a Twitter post by McDonald’s asked followers what items they wanted to see back on the menu. The post attracted an enormous number of responses, offering people the chance to reminisce and nominate their favourite burgers, sides, drinks and desserts through the years.

Many of the items mentioned were one-time favourites we used to enjoy in McDonald’s UK restaurants. From the McRib to the little-known McPizza, there have been many unique menu items discontinued over the years.

The very first UK McDonald’s restaurant opened in 1974 in Woolwich, London. In the nearly 50-years since, it’s fair to say the menu has seen many changes. In Liverpool, it all started on Lord Street in November 1985 when the new £1.4 million city-centre restaurant opened its doors.

So taking inspiration from the response to the McDonald’s tweet asking what should be brought back – as well as shamelessly nominating a few of our own favourites – we’ve put together a list of nine menu items McDonald’s lovers want to see make a return. If you think we’ve forgotten any that should be on the list, let us know in the comments below.

The barbecue-flavoured pork sandwich first appeared in restaurants in 1981 but was taken off the menu just four years later. Since then it has returned for cameo appearances on menus across the world.

According to Wales Online, The McRib was last available on UK menus in 2015 when it launched as a limited edition item for just five weeks after a 12-year hiatus. However, it doesn’t look there are plans to bring it back to the UK, and for good reason.

On their website, McDonald’s state why they no longer sell the item, explaining: “The reason for this is that the McRib patty is made from ground pork and, in the UK, we consider it important to separate pork and beef on the grill. Unfortunately, many of our restaurants do not have enough grill capacity to cook pork and beef products at the same time.”

In January this year, McDonald’s made the tough decision to scrap bagels and wraps from its UK menu. The now lost breakfast bagel consisted of a pork sausage patty seasoned with herbs, folded egg and two slices of cheese, in a bagel.

The items had been temporarily taken off the menu in March 2020, at the outbreak of the pandemic. Many thought the bagels would make a return but the chain confirmed their permanent departure in a tweet from the McDonald’s UK account in January this year.

A tongue in cheek statement posted on Twitter said: “It is with love and deep respect for one another that we announce we are parting ways with breakfast bagels and breakfast wraps.” Adding: “We want our fans to know this is a mutual decision, to the extent that a bagel can make its own decision.”

The Big Breakfast was a popular item on British menus for over 25-years. In 2015, McDonald’s made the decision to call time on the Big Breakfast, which was the only way you could get your eggs scrambled at the chain.

The Big Breakfast was made up of a hash brown, scrambled egg, sausage patty and toasted muffin. Brits on Twitter didn’t take the news well at the announcement.

Mark Harby (@maharby) tweeted: “Gutted, #McDonalds have stopped doing the big breakfast meal. Might have to write to my MP.”

While David Birch (@dgwbirch) tweeted: “WTF IS WRONG WITH THIS COUNTRY??? McDonalds don’t do Big Breakfast any more??? I didn’t vote for this B******S.”

So missed is the item, in 2016, an online petition attracted thousands of signatures hoping to persuade McDonald’s to bring it back. Alas, it wasn’t to be.

So long Big Breakfast, old friend. You were the world’s greatest hangover cure.

Another favourite that came and went was McDonald’s Bacon Clubhouse Burger. Stacked high, this mouth watering item consisted of cheese laid on top of two beef burgers, sliced tomatoes, onions, lettuce, a drizzle of special sauce and a couple of smoked bacon strips – all wedged between two soft burger buns.

Despite a few cameo appearances down the years, the last time we saw the Bacon Clubhouse double burger was in 2021.

The classic American hotdog made its way on to the McDonald’s menu during the 1990s. It was sold in the UK briefly during the late 1990s and was also a seasonal summer item in 2002.

Hotdogs aren’t an item you automatically associate with McDonald’s, but if you’re desperate to try one, you’ll have to make a trip to Japan. They were reintroduced to the breakfast menu, strangely, in 2009.

Hard to believe, but McDonald’s did sell pizzas for a limited period in some restaurants in the mid 1990s as part of a sales and product test. As part of the test the restaurant trialled three flavours – Cheese, Cheese & Pepperoni and the Deluxe (cheese, green pepper, onion, peperoni and more).

Each pizza was eight inches across and cut into four slices. But if you’re salivating at the thought of getting your hands on a McDonald’s pizza you’re in for a disappointment. On their website in 2018, McDonald’s said they had no plans to reintroduce pizza to their menu.

Salad shakers had three years on the McDonald’s menu from 2000 to 2003. They were discontinued but led to the trend of fast food chains having salad options on their menus.

Of course McDonald’s still serve salad now – just not in shaker form. They were in Garden, Chef and Grilled Chicken Caesar options.

It was only in October this year that McDonald’s decided to give the Chicken Legend burger the chop. For 15 years the Chicken Legend was a fixture on UK menus, coming in three flavours: Cool Mayo, Hot and Spicy Mayo and BBQ Sauce.

It’s not clear whether the burger is gone for good, but it’s departure on October 19 made way for the introduction of a new chicken burger the same day, the McCrispy. However, many who took to Twitter to lament the passing of the Legend.

Nigel (@Nigel_James1) Tweeted: “Goodbye Chicken Legend. I just hope this new McCrispy can be as good as the Legend, as this is the replacement.”

While Lupin Jay (@LupinJay010) Tweeted: “Bring back the chicken legend :( how are you removing one of your popular items.”

With ice cream and strawberry cheesecake, it’s hard to believe this winning combination was taken off the menu. Sadly, even topped with strawberry sauce, biscuit crumbs, and white chocolate cheesecake truffle pieces, this McFlurry didn’t prove popular enough with the customers back in 2016.

Social Media News
Previous Post
Why hayashi rice should be your last meal before leaving Japan
Next Post
China and Pakistan ‘want dialogue’, but make it unacceptable to India