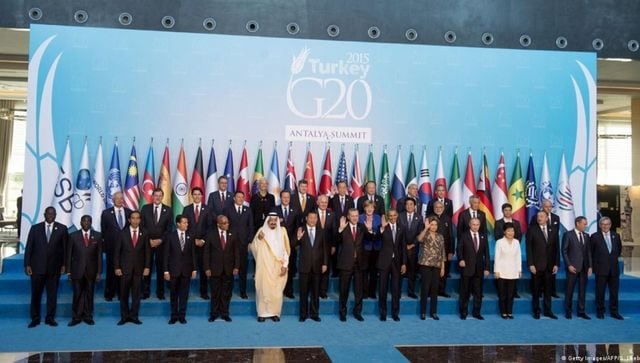 A row has erupted over using the lotus flower on the logo for India’s G20 presidency, with the Opposition targeting the ruling Bharatiya Janata Party-led central government. This comes after the logo, theme and website of India’s G20 presidency was unveiled by Prime Minister Narendra Modi on Tuesday (8 November).

The logo depicts planet Earth placed inside a lotus and carries the message of ‘Vasudhaiva Kutumbakam‘ — ‘One Earth, One Family, One Future’. The lotus depicting the logo of India’s G20 presidency bears saffron and green colours while the Earth uses blue and white hues.

According to a statement by the Prime Minister’s Office (PMO), “The G20 logo draws inspiration from the vibrant colours of India’s national flag – saffron, white and green, and blue.”

What did Prime Minister Modi say about the significance of the G20 logo? Why is the Opposition unhappy with the logo? What is G20 and when is India assuming the presidency? We explain.

Speaking about the significance of the lotus symbol in the G20 logo, Modi said at a video conference on Tuesday, “The symbol of the lotus in the G20 logo is a representation of hope in this time. No matter how adverse the circumstances, the lotus still blooms. Even if the world is in a deep crisis, we can still progress and make the world a better place.”

He said that goddesses of knowledge and prosperity (Saraswati and Lakshmi) are seated on a lotus and hence Earth is placed on top of the flower in the logo.

“The seven petals of the lotus in the logo are also significant. They represent the seven continents. Seven is also the number of notes in the universal language of music. In music, when the seven notes come together, they create perfect harmony. But each note has its own uniqueness. Similarly, the G20 aims to bring the world together in harmony while respecting diversity,” Modi was quoted as saying by Indian Express.

Prime Minister shared that the government had sought contributions from the people for the logo design. “I was happy to know we received thousands of creative ideas. Today, those ideas are the face of G20,” he said, as per NDTV.

The Opposition, especially Congress, has taken strong objection to the logo for India’s G20 presidency.

Notably, a lotus with saffron, green and white colours is also the BJP’s election symbol.

Pointing this out, Congress’ general secretary in charge of communications Jairam Ramesh tweeted, “Over 70 years ago, Nehru rejected the proposal to make Congress flag the flag of India. Now, BJP’s election symbol has become official logo for India’s presidency of G20!”

He added, “While shocking, we know by now that Mr. Modi & BJP won’t lose any opportunity to promote themselves shamelessly!”

Over 70 years ago, Nehru rejected the proposal to make Congress flag the flag of India. Now,BJP’s election symbol has become official logo for India’s presidency of G20! While shocking,we know by now that Mr.Modi & BJP won’t lose any opportunity to promote themselves shamelessly!

“I don’t have any idea why and in what conditions, the lotus symbol was used in the G20 logo. Why lotus symbol should be there in the logo? There are other symbols too which include tiger, roaring lion, etc. Why didn’t they choose other symbols?” KC Tyagi, JDU general secretary, was quoted as saying by Times Now.

“BJP has the habit of picking up controversies,” he added.

The BJP hit out at Congress for opposing the G20 logo and said the grand old party is “insulting Indian culture and Hinduism by disrespecting lotus”.

As per ANI, BJP Rajya Sabha MP and national spokesperson Sudhanshu Trivedi said, “Lotus has been one of the most important in the culture of India for thousands of years. If we want to become an intellectual superpower and an economic superpower, then we have to believe it. Goddess Lakshmi rests on the lotus. Goddess Saraswati also sits on the lotus. Those who talk about opposing the lotus, are certainly insulting Indian culture and Hinduism.”

The saffron party leader further alleged that by doing politics over logo the Congress has shown “disrespect they have towards elements of nationalism” and would go to “any extent to humiliate national sentiments”.

Lotus happens to be our National Flower! It also happens to be the aasan of Maa Lakshmi – Are you opposed to our national flower? Will you remove Kamal from name of Kamal Nath?

Formed in 1999, G20 is an intergovernmental forum comprising the world’s major developed and developing economies. It came into existence following the financial crisis of the late 1990s that affected East Asia and Southeast Asia specifically.

The forum addresses various issues like the global economy, climate change mitigation, and sustainable development. It aims to secure international financial stability by including middle-income countries.

The presidency of the G20 rotates every year among its members. AFP (Representational Image)

“The presidency of the G20 rotates every year among its members, with the country that holds the presidency working together with its predecessor and successor, also known as Troika, to ensure the continuity of the agenda. Currently, Italy, Indonesia, and India are the Troika countries,” says the G20.org website.

India will assume the presidency of the G20 group from the current chair, Indonesia, on 1 December 2022 and hold the post till 30 November 2023.

During New Delhi’s presidency, India, Indonesia and Brazil will form the troika.

India will organise “about 200 meetings in 32 different sectors in multiple locations across India. The G20 summit to be held next year, would be one of the highest profile international gatherings to be hosted by India,” the Press Information Bureau (PIB) said in a press release.

Modi also said during the video conference that events will not be limited to Delhi and some other cities but all corners of the country will witness programmes during India’s one-year presidency.

Social Media News
Previous Post
World’s Longest Flight Takes a ‘Roundabout’ Route and Internet Needs to Know Why
Next Post
‘The beast is dying…’: Vijay Deverakonda recovers from back injury