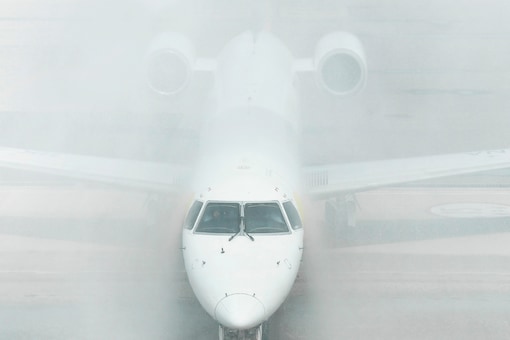 The world’s longest flight journey begins at John F Kennedy (JFK) airport reaches its end at the Singapore Chani airport and it follows a curving route instead of a straight line.

Social media users are left perplexed after knowing that the longest flight in the world appears to travel in a curvy route rather than a straight line. Notably, the world’s longest flight which covers a distance of 9,537 miles, follows a roundabout route to reach its final destination. The discussion on the social media platform began when a TikTok user showcased the flight’s curvy route using a digital map, reported LADBible. In the video shared by TikToker Travel With DJ, the user informed that the world longest’s non-stop commercial flight takes off from New York City to Singapore.

The journey that begins from the John F Kennedy (JFK) airport meets its end at the Singapore Chani airport. According to a report by LadBible, the flight takes a whopping 18 hours and 50 minutes to reach its destination. Amidst this, the TikToker used a red dotted line to showcase the airplane’s curved route when following a straight line appears to be simpler. The viral video has amassed over a lakh likes and thousands of comments on the social media platform. While a barrage of internet users appears curious to find out why the flight follows a curvy path, many flooded the video with funny anecdotes.

As per the portal, a user commented, “Why don’t they just fly straight east?” another joked, “Bro took a world tour,” one more added, “Pilot had beef with Europe.” Notably, there’s a reason behind following the curvy path. One Monroe Aerospace explains that following a curvy route is indeed safer and much quicker than flying in a straight line. As the curvy routes hug bodies of land instead of directly flying over the Pacific Ocean, it gives the planes easier possibilities to conduct an emergency landing when required.

“Flat maps are somewhat confusing because the Earth itself isn’t flat. Rather, it’s spherical. As a result, straight routes don’t offer the shortest distance between two locations. Whether a commercial airline is flying from the United States to Asia or elsewhere, it will have the fastest and most fuel-efficient flight by performing a curved route,” said One Monroe Aerospace.