‘You can’t cover a war from afar,’ says Swiss reporter in Ukraine

A Kyiv correspondent for Swiss public broadcaster RTS has received two awards this autumn for her humane and unvarnished reporting on the war in Ukraine. Maurine Mercier explains her drive to confront reality. 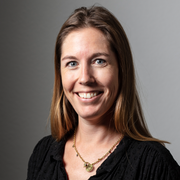 My specialty is telling stories, and decoding what happens in Switzerland and the world from accumulated data and statistics. An expatriate in Switzerland for several years, I have also worked as a multimedia journalist for the Swiss national broadcaster.

Maurine Mercier hates insularity and vanity in journalism – and the glorification of journalists. She therefore accepted two awards this autumn with a mixture of gratitude and discomfort: the prestigious Bayeux Calvados-Normandy AwardExternal link for war correspondents and the Prix DumurExternal link, an annual award for a Swiss journalist or media outlet.

“Our job is to highlight those who bear witness,” she insisted, “not ourselves.”

The 41-year-old from Lausanne spoke warmly and modestly with SWI swissinfo.ch by phone from Kyiv. She agreed to talk for almost an hour and a half during a busy day in order to inspire the next generation of journalists – especially young women.

Mercier covers the war in Ukraine for RTS, the French-language section of Swiss public radio and television. (SWI swissinfo.ch and RTS are both part of the Swiss Broadcasting Corporation.) Mercier also reports on the war for Radio France and Belgian public broadcasting (RTBF). She recently signed a four-year contract with RTS. In mid-August, she moved to Kyiv, which is once again being struck by Russian missiles.

Boots on the ground

When the war began in late February, Mercier had been a correspondent in North Africa for six years. After following the first 24 hours of the invasion on social media, she knew she had to leave for Ukraine.

“I’m convinced that you can’t cover a war from afar,” she explained. She volunteered to go, and RTS agreed to it because of her track record of rigorous reporting from difficult places – like Donbas (in eastern Ukraine) in 2014.

According to Reporters Without BordersExternal link, eight journalists have been killed in Ukraine since the beginning of the year. Frédéric Leclerc-Imhoff, a friend of Mercier’s, was among them, and his death affected her deeply. She works alone with a translator, so security is something that preoccupies her constantly. RTS maintains a strict security protocol, but “Maurine is not a hothead,” said Virginie Matter, RTS deputy editor-in-chief, who has worked with Mercier for five years.

When Mercier isn’t driving her “old car that still has its Tunisian number plates,” she travels around Ukraine by public transportation, using caution as her guiding principle.

“I accept the risks,” she said, “but I try to minimise them as much as possible.”

Born to a mother from Quebec and a father from canton Vaud, Mercier grew up in Switzerland and spent holidays in Canada. She caught the travel bug early and never shook it off.

“I always feel a bit trapped in Switzerland,” she admitted. “It’s a wonderful country, but it’s an anomaly.”

While studying international relations in Geneva, she worked a variety of odd jobs to pay for trips to Cuba, Venezuela, and China – and even a clandestine attempt to visit North Korea.

“I’ve always felt a need to see the world with my own eyes,” she explained. She is fluent in Spanish and English, has mastered German, has “learned to get by” in Arabic, and is currently tackling Russian and Ukrainian.

Journalism felt like a path that might satisfy her curiosity; she also considered humanitarian work. In the end, she began her career in local television in canton Vaud, where she gained the experience that now allows her to report independently in the field. She began working for RTS radio in Lausanne in 2012.

In 2015, Mercier joined the international desk – a dream come true – where she was a valued colleague. “But I realised, while I was there, that what I really wanted was to report on the ground abroad,” she explained.

So she resigned and moved to Tunisia as a freelancer. From there, she also covered Algeria and Libya. She interviewed militiamen in the Libyan civil war but found that conflict to be particularly complicated in terms of access to information. In 2018, she received a Swiss Press AwardExternal link for her coverage of African migrant women who had been raped on their journeys.

While in Ukraine, Mercier has recorded the testimony of a mother who was raped in Bucha by Russian soldiers and that of a Ukrainian adolescent who survived Russian imprisonment. Mercier received the Bayeux Award – a first for a Swiss journalist – for her report from Bucha.

Other journalists often note the humanity of Mercier’s reporting, which emphasises the words – too often silenced – of ordinary people. Mercier’s “great sensitivity” is key to her “somewhat unique perspective,” her manager Matter believes.

“Despite her experience,” Matter observed, “she never has an ‘I’ve seen it all’ attitude. She retains her capacity for indignation but also her critical judgement.” Mercier herself feels that she simply “shows reality”. She identifies with the idea that “we often understand the big story through the small one.”

To gain the trust of trauma victims, Mercier spends a lot of time with them. She also makes it a point of honour to maintain relationships over the long term. Absorbing the horrific stories can be psychologically difficult, but she copes by talking, crying, and also laughing with the people she works with. “Our common experience means that we don’t need filters,” she explained, “which is really helpful.”

Living in Ukraine makes it easier to cope with tough experiences. “Parachuting into a terrible situation for ten days and then returning to the comforts of Switzerland was always very painful for me,” she says.

Mercier shares the common frustration that the war is being covered almost exclusively from Ukraine. But so far the Russian authorities have not granted any of her requests to report from Russia.

“We’re condemned to cover the war only from one side,” she said, “which creates a fundamental problem, because Ukrainian propaganda also exists.” Since information is being used as a weapon in the war, Mercier worries about being manipulated, but she uses this fear as a safeguard: “You have to be wary of everything to avoid being exploited,” she notes.

Despite the strain of her all-consuming work, Mercier is a joyful person. She says she “couldn’t be better supported” by her family and the people she loves. She remains very attached to Switzerland and spent several restorative weeks in the Alps in canton Valais this summer.

Perhaps most importantly, she feels privileged to work as a journalist: “Collecting these testimonies every day – it’s a gift.”

Adapted from French by Katherine Bidwell/ds

Articles in this story

In compliance with the JTI standards