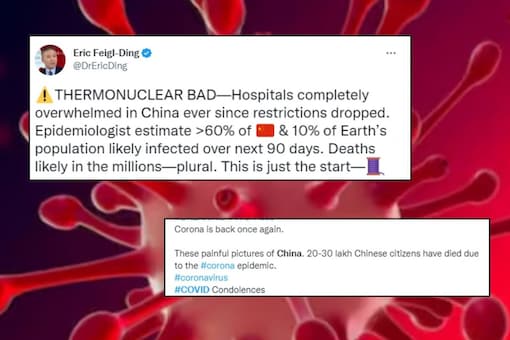 Covid-19 has grappled China once again and the situation couldn’t be worse. Internet in fear after videos from hospitals and streets go viral (Photo Credits: Twitter)

With such a massive hike in Covid-19 cases in China, hospitals have been flooded and crematoriums have dead bodies piled up. Videos of horrific scenes from Chinese hospitals and streets go viral.

Not so far from the days when hospitals were flooded with Covid-19 patients and crematoriums had dead bodies piled up for last rites. The Covid pandemic was indeed a nightmare that one could never re-imagine. Well, China hasn’t been left with a choice as the alarm bells for the Covid-19 scare have started ringing in the country with several getting infected with the novel coronavirus. The story doesn’t end here! It was just after an ease in the zero-Covid policy that cases surged at such a blistering speed that an epidemiologist, Eric Feigl-Ding, predicted over 60% of China’s and 10% of the Earth’s population to be infected in the next three months. “This is just a start,” he remarked.

It looks like the Covid-19 situation in China can’t get more dangerous with several videos of dead bodies piled up in the hospitals being shared on the internet. From overburdened crematoriums to people dressed in the PPE kit taking to the streets to distance the infected ones from their families, clips from the local scenes of China have gone viral on social media. People have also shared techniques of the Chinese population to protect themselves from the deadly virus. With such a dire warning from China after three years when the virus first grappled the world, people are left baffled and scared at the same moment because ‘not again!’

⚠️THERMONUCLEAR BAD—Hospitals completely overwhelmed in China ever since restrictions dropped. Epidemiologist estimate >60% of & 10% of Earth’s population likely infected over next 90 days. Deaths likely in the millions—plural. This is just the start—pic.twitter.com/VAEvF0ALg9— Eric Feigl-Ding (@DrEricDing) December 19, 2022

To add to the worry, China’s National Health Commission has stated that the R number (which tells an average of how many people a sick person could infect for the current variant) is higher than all the previous Covid-19 waves that have hit the world to date. Thus, the situation is also expected to get worse with Christmas and New Year around the corner. With a rapid spike in Covid-19 infections in the world’s second-largest economy, the fear is not just about the spreading of the virus globally but also how it would constrain the global supply chain to eventually delay economic recovery in China and thus, the world.