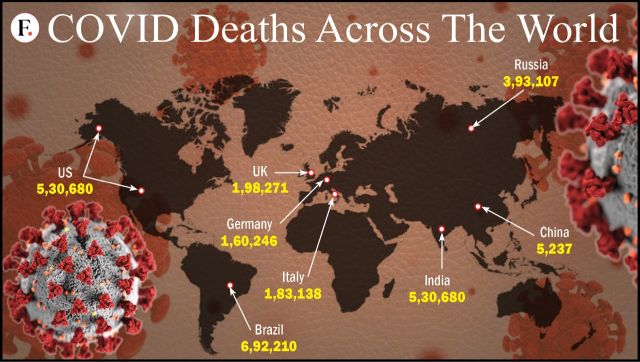 After witnessing rare and unprecedented protests late in November, China, on 7 December, rolled back its tough zero-COVID rules — much to the relief of the protesters and people across the Asian nation. Now, two weeks later, China is witnessing a COVID wave unlike any other, leaving their medical facilities gasping and people wondering if they were better off with the strict virus curbs.

If one image or post correctly describes the chaos that China is now witnessing, it is courtesy Eric Feigl-Ding, an epidemiologist and health economist. On Twitter, he posted a video of how hospitals in China were struggling with a huge surge in COVID cases, adding that this was only the tip of the iceberg and the worst — more than 60 per cent of China and 10 per cent of Earth’s population are likely to be infected over the next 90 days with deaths likely in the millions.

⚠️THERMONUCLEAR BAD—Hospitals completely overwhelmed in China ever since restrictions dropped. Epidemiologist estimate >60% of 🇨🇳 & 10% of Earth’s population likely infected over next 90 days. Deaths likely in the millions—plural. This is just the start—🧵pic.twitter.com/VAEvF0ALg9

But as reports keep emerging of the worsening situation in China, the National Health Commission, which collates the country’s virus data, has reported only five COVID deaths on Tuesday, two on Monday — and none in the previous two weeks. This data has raised scepticism and stoked speculation officials are hiding the true picture from emerging to the world audience.

As per China’s official figures, there have been just seven deaths among the 1.4 billion people since the zero-COVID restrictions were lifted. This is a stark difference from other countries when they moved away from their coronavirus restrictions. For instance, Singapore, which had a well-planned shift away from quashing all cases, experienced an increase in deaths to about two per-million daily.

According to an Associated Press report, China’s National Health Commission has put the total number of COVID fatalities in the country since the beginning of the epidemic in January 2020 at 5,237, and the number of confirmed cases of the disease at 3,80,453. This seems very little compared to what India, the US and other countries have reported. However, according to numbers compiled by Our World in Data, cumulative case numbers in China from the beginning of the pandemic are 1.9 million.

The total number of deaths owing to COVID since the beginning of the pandemic in 2020. Graphic: Pranay Bhardwaj

On Tuesday, clarifying its method to counting COVID deaths, the National Health Commission said that only COVID-19 patients who die from respiratory failure will be counted towards the official death toll.

Wang Guiqiang, an adviser to the NHC and director of the infectious diseases department at Peking University First Hospital, issued a statement that clarified how China was calculating the death toll, calling their method a “scientific and realistic manner”.

“Deaths caused by pneumonia and respiratory failure resulting from COVID-19 will be classified as coronavirus deaths, while deaths caused by other underlying diseases, such as cardiovascular and cerebrovascular diseases, will not be counted as COVID-induced deaths,” he said.

WATCH: The Omicron variant fuelling the COVID surge in China

This narrows the criteria for counting COVID deaths, making it easier for officials to lessen the death count and show China in a positive light.

Just how bad is the situation?

However, China’s health agency, it appears, is masking the full impact of their abrupt shift away from COVID-zero. A glance at China’s Twitter — Weibo, and reports emerging from the country paint a very different and scary picture.

News agency AFP has reported that crematoriums across China are straining to deal with an influx of bodies, though they don’t specify if the deaths are related to COVID.

A crematorium worker in Chongqing, where people with mild COVID symptoms have been asked to go to work, said that the place he worked at had run out of space to keep the bodies. “The number of bodies picked up in recent days is many times more than previously. We are very busy, there is no more cold storage space for bodies. We are not sure (if it’s related to COVID), you need to ask the leaders in charge,” he said as quoted by AFP.

In Guangzhou, the situation is no different. An employee at one crematorium told AFP that they were cremating 30 bodies a day.

In northeast’s Shenyang city, a worker at a funeral service business told AFP that the bodies were being left unburied for up to five days because crematoriums are “absolutely packed”. When asked by AFP if this was related COVID and he responded: “What do you think? I’ve never known a year like this one.”

In Beijing’s Dongjiao Crematory, workers complained of the jump in the calls for cremation and other funeral services, reported the Wall Street Journal. A worker at the crematorium reportedly told WSJ that the Dongjiao Crematory was receiving bodies 24 hours a day and that it was conducting cremations in the predawn hours and in the middle of the night. She told WSJ that around 200 bodies are coming every day up from 30-40 bodies a month back. 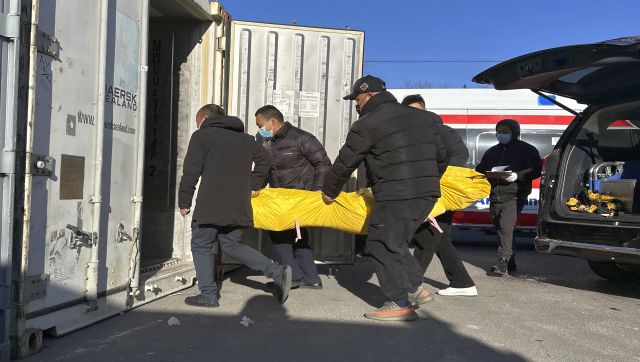 Workers transfer a body into a container for storage at a crematorium in Beijing. Deaths linked to the coronavirus are appearing in Beijing after weeks of China reporting no fatalities, even as the country is seeing a surge of cases. AP

On Weibo, the public echoed similar sentiments — of medical facilities lacking and crematoriums unable to deal with the influx of the bodies.

In a now deleted post, a man working in a crematorium in Hebei wrote that his facility alone had performed 22 cremations a day from 4-5 December. Another user, this time from Guangdong, wrote that the crematorium he had gone to had staff working overtime. In Henan, a man said a funeral parlour was so overwhelmed that bodies were being placed in corridors, wrote a third man. A woman in Chongqing complained how she had to wait for days for a death certificate for her grandfather.

A look at hospitals also shows that all is not well in China. Medical staff have been posting on social media that they struggle not only with the rising number of patients being rolled in, but also that they are being asked to work despite testing positive themselves.

One journalist posted this video of an emergency room in a Beijing hospital, saying it was “close to collapse due to majority infections”.

Additionally, the ramping up of medical services across the country shows just how bad the situation is. The Global Times, China’s own tabloid, reported that cities and medical institutions were ramping up efforts to expand intensive care units (ICUs) and boost their reserves of medical resources and treatment facilities for severe COVID-19 cases.

Moreover, earlier in the month, the Beijing Emergency Medical Centre urged only critically ill patients to call for ambulances, saying that emergency requests had jumped to 30,000 a day from an average of about 5,000, reported the Wall Street Journal.

China has, as per their own account, administered almost 3.5 billion doses of vaccines. But, experts state that the penetration among the 80-plus population has been very low, making them even more susceptible to the virus.

Moreover, questions are being raised about the efficacy of the vaccines used by the Chinese — Sinovac and Sinopharm.

Health experts have stated that their data on the booster doses isn’t clear, making it even more difficult to get a clear image of what’s going on in China. One has to remember that boosters are necessary as the effectiveness of a vaccine decreases over time.

Social Media News
Previous Post
Spying, misinformation and censorship: Why TikTok is seen as a threat to US national security
Next Post
Campuses are banning TikTok from dorm Wi-Fi as U.S. Tiktok bans spread