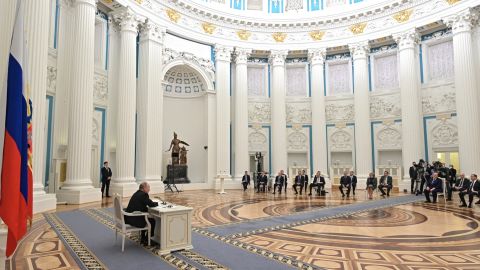 Democracy has its flaws, but it has emerged from the pandemic in much ruder health than the alternative

For nearly half a decade, you could be forgiven for thinking just about everything in Western democracy seemed a bit broken. The social-media yelling in 140 characters. The wild populism, and dog-whistle racism. The clumsy coronavirus lockdowns and their attendant conspiracy theories. The tolerance of absolute, constant falsehoods. The questioning and beleaguering of the electoral process.

Some began to behave as if it were smoother on the other side of the fence, in autocracies where things are just ordered to happen, and criticism is swallowed whole.

Yet, as we stagger past the third anniversary of Covid-19’s emergence, the fallacy that autocracies are a superior social contract is crumbling. At the end of 2022, the world is a place where consent matters, and debate might actually save your hide.

The Trump era created a safe space for autocracies to flex on the global stage, while American tried to put itself First, and its commander-in-chief was happy to receive “lovely” letters from North Korea, or get very close to the Kremlin. But it took the pandemic to expose the utter mess one man in charge can create.

The most glaring and unimaginably stark example is Russia. President Vladimir Putin bumbled his way through the pandemic with snap lockdowns, a poorly performing vaccine, and a general disregard for how useful accurate data can be in defeating a complex foe like Nature. But it was his personal choices that led to a disconnect which has proved fatal to tens of thousands of innocent Ukrainians, and perhaps even more Russian soldiers.

The persistent warnings from Western intelligence in January that an invasion of Ukraine was imminent seemed far-fetched to many analysts, including me. Those analysts overlooked the enormity of the task, and the assumption the Kremlin remained a rational actor. Those calming caveats were swiftly whisked away when – in the days leading up to the war – Putin summoned his security henchmen and dressed them down, at a safe distance of well over 20 feet, and then delivered a 57-minute televised speech showing he had spent the pandemic reading all the wrong parts of the internet.

His spoken dissertation even reminded Russians how mean Bill Clinton had been 20 years ago, shunning Putin’s stated desire to join NATO. Putin’s isolation had compounded not just his historical grievances. There were now fewer subordinates in contact with him, and fewer opinions voiced to counter the absurd assumption Russia’s invasion would be welcomed by Ukrainians and last about three days.

A RUSI report recently noted that seized Russian orders showed units expected to be “cleaning up” within 10 days, and that no effective “red team” assessment of the plan – challenging its assumptions – had happened.

And so, the largest land war in Europe for 75 years began, and with it a likely military defeat for Russia that may rewrite the established norms of European security and see Moscow’s place as a global superpower evaporate. Putin’s insecurities over NATO and the practical task of connecting the occupied Crimean Peninsula to the Russian mainland fueled his catastrophic decision. But the Kremlin head’s isolation – along with his echo chamber of paranoid nonsense – cemented it.

But even now, in this late stage in the Russian military demise, when its readiest form of resupply is forced conscripts to the frontline, Moscow must be mindful of consent. The “partial mobilization” announced in September has sent 77,000 Russian men to Ukraine, Putin recently said. But it has also unleashed a wave of protests perhaps not seen in Russia since the 1990s.

Tightening the screws on dissent is a sign opposition is growing, not ebbing. The nastier Russia gets, the more acutely aware the Kremlin is of its unpopularity. Invading Ukraine was the worst decision a Russian leader has made since the Soviets invaded Afghanistan. We know how that misadventure ended. 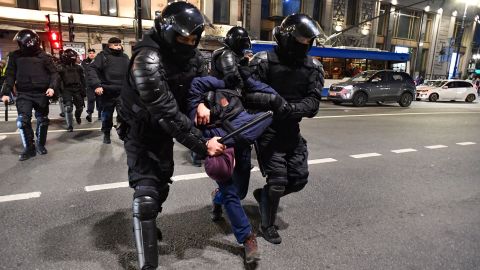 The pandemic caused economic and emotional stress in every society, leaving citizens less tolerant of poor managers and outdated dogma. Even the United Kingdom swiftly ejected two prime ministers over issues of conduct and incompetence, not long after their ruling Conservative Party had won a landslide victory at the last election.

The economic fallout from the pandemic is also the backdrop for another dazzling failure of autocracy, in Iran. But the focal point of recent protests has been the brutal treatment of teenagers for protesting mandatory headscarves. Killing a young woman for not wanting to dress more conservatively than her grandmother perhaps did (Iran was – as recently as the 1970s – secular) is grotesque in any society. 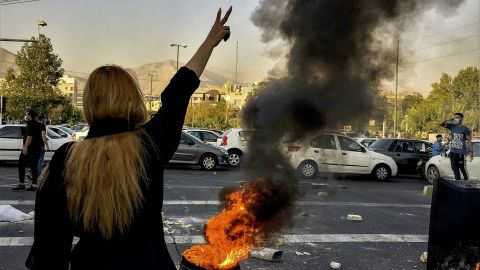 But it lit the touch paper in communities ravaged by years of sanctions, the pandemic, and persistent inflation of perhaps as much as 50%. Permit salaries and savings to diminish that much annually, and any elected government could expect to be ousted fast. In Iran’s cities, the violence around this dogma did not distract from the economic fury, but amplify it.

Well over half of Iran’s population was born in the 1990s, when the Islamic Revolution was already a decade old. A system born in the era of the landline is telling youth born into the world of fax machines how to behave in the era of quantum computing.

The pandemic hit Iran hard, and I witnessed in 2020 how poorly resourced Tehran’s hospitals were. When your parent is dying and you can’t get a ventilator for them, you don’t have time for a lengthy discourse blaming US sanctions imposed because of Iran’s confrontation of the American hegemony in the region. An emergency like Covid can damage what remains of the contract between ruling conservatives and citizens: If you cannot protect us from a disease at our time of need, then what is the purpose of the corruption, repression and rules on women’s dress? 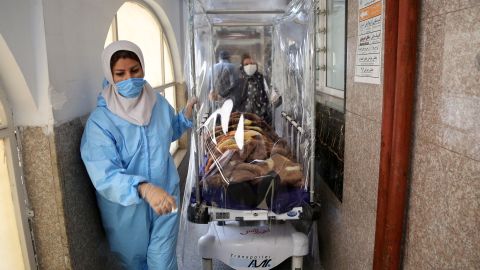 The recent public confusion over whether the country’s morality police would be disbanded – a statement made by the prosecutor general which was later mauled – is a sign of government reform perhaps, but also an indication of how state power is not a tidy behemoth in Iran. There is debate, too, and here it clearly, with hundreds of corpses already underfoot, considered bending to popular will.

This stark and deadly repression does not at this time herald the demise of the Iranian regime. But it is perhaps a moment of irreversible acceptance that the people cannot just be Ctrl-Alt-Deleted when they don’t suit the state program. It is a recognition that even the best-resourced, most controlling and efficient of repressive regimes – China – has had to deal with. 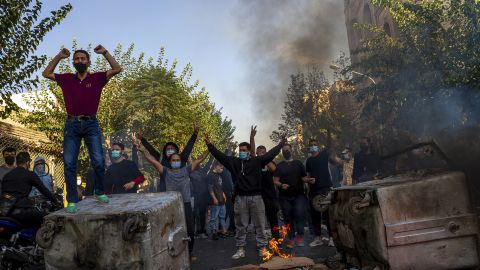 Getting the big decisions wrong

The pandemic led Beijing to resort to mass control on a whole new level. Its solution to the disease ravaging the planet was to be the harshest of all – in limiting movement. The authorities’ favored tool – used to its limits – was the one almost every other society realized would not work indefinitely.

Until recently, Chinese citizens were still being welded into their homes in quarantine, and even burning to death in one tragic instance when they perhaps could have been rescued from a domestic fire. It’s perhaps the most damning indictment of China’s one-person rule this century. 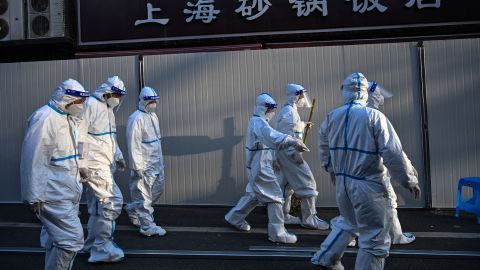 The world has been on a steep learning curve, where social distancing, economic subsidies, vaccines, agonizing deaths and limited global travel have led most societies to now accept the Covid-esque persistent cough as part of what happens in winter. Yet China’s initial decision – stifle the disease – has barely evolved. Its vaccine program has faltered, yet its original tool of mass surveillance has not.

What is more remarkable is not protests breaking out under such an authoritarian yoke, but that President Xi Jinping did not presume they would.

Beijing appeared to have been taken by surprise, but also believed it could repress its way out of the unrest. The recent removal of significant parts of the quarantine and testing systems does not solve China’s Covid problems. It was simply their authorities’ only choice. And it is a badly timed one. China is not adequately vaccinated to cope with a massive rise in cases, particularly its elderly population, many experts argue. Even if 1% catch it badly, that is 14 million people in need of medical care – roughly the population of Zimbabwe. 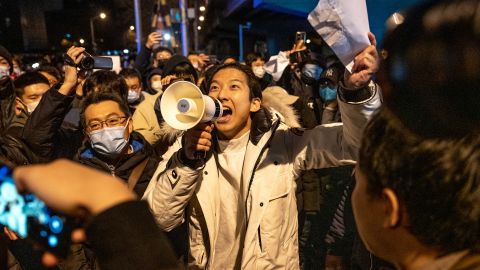 Huge challenges require decision-makers of enormous ability. Xi has unparalleled power, evidenced when he sat by as his predecessor Hu Jintao was inexplicably led out during the highly choreographed closing moments of the recent National Congress. But it is pretty clear that Xi got the big decisions around Covid wrong. And that the country where SARS-Cov-2 first emerged is enduring the longest impact of the virus because of poor decisions by its leaders.

It is a problem for Xi. The singular selling point of autocratic power is that it is absolute: that you can get things done without the delay of debate and compromise that democratic systems endure.

The point is to be strong, implement decisions fast, and consider dissent the cost of tough, good decisions; not to appear strong, implement fast, and then change your mind publicly after months pursuing a bad idea. For Xi, it is also dangerous for a population to learn they can only truly communicate with their government through disobedience and protest.

It’s important to feel discomfort when extolling the virtues of modern democracy. It doesn’t really work. It is slow and encourages ego and half-measures. It keeps changing its mind and wasting endless resources while stumbling for the solution.

But it provides space for dissent and, more importantly, other, competing ideas. And, if you are forcing taxi drivers to fight in a war of choice you are losing, or shooting teenagers for taking off headscarves, or imprisoning people in their apartments to suppress a virus the rest of the world is living calmly with, alternative ideas are important.