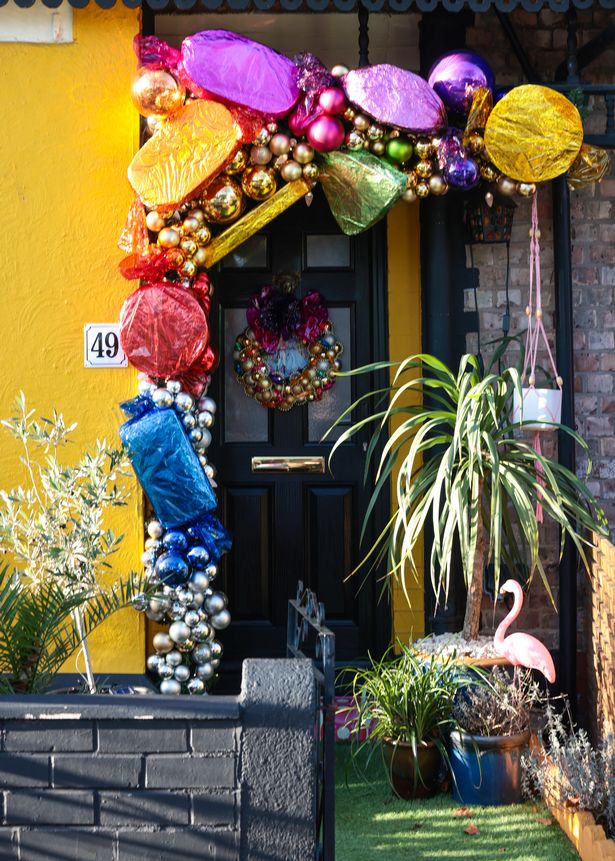 Every homeowner has their own taste and style when it comes to their home interior. Some people opt for the more traditional look with timeless pieces that they can treasure for years to come, whereas others prefer much more modern decor and like to keep up with the latest trends.

Our homes often tell a story and are a reflection of our personalities, and this especially rings true for Estelle Bilson. The mum-of-one’s entire house is a spectacular tribute to the 1970s, an era that she has been fascinated with ever since she was a teenager, and Christmas is no exception.

Estelle, 45, spoke to us as part of our Where I Live series, where each week we chat to a different homeowner across Greater Manchester to hear all about their renovating journey and look at how they’ve made their house a home.

READ MORE: ‘We bought a 1950s time warp on a whim – people doubted it but now it’s our forever home’

Estelle, who is from East Anglia and moved to Manchester seven years ago, told the Manchester Evening News how her retro collection began: “I’ve always collected things ever since about 1990. I started buying vintage bits and bobs when I was in my teens and then it just went from there.

“I started with clothes and little knick-knacks when I was living at home with my parents and then when I moved out and became a student, my collection grew.

“Back then, 70s furniture and accessories weren’t very desirable. It was selling in charity shops for pennies because people just didn’t want it anymore as it was desperately out of fashion, so me and my housemates would just trawl through second hand shops and see what we could find.”

Estelle worked in London as a technical designer and product developer in luxury fashion for more than 20 years before meeting her partner and moving into his house in Trafford.

The mum-of-one said: “It was like a bachelor pad before I moved in. My partner has always been into retro stuff and 70s music, but I don’t think he had much time for interior design.

“When we met he knew I had a huge collection so when I moved up I brought everything with me. Over the years we’ve sold that and bought things together. He’s as interested and invested in the collection as much as I am these days.”

Having collected hundreds of retro-style pieces over the years, Estelle took her obsession to the next level and transformed the entire house into 70s shrine.

Her home boasts a yellow exterior, a bright orange and green living area, funky furniture and even a disco ball bathroom.

“The first room we did was the living room. We bought some amazing orange curtains from Germany, we painted the room orange and then it spiralled from there,” Estelle explained.

“The house just became a natural extension of the collection that I had. It was very much a collaborative effort at the start but as time’s gone on my partner trusts me more with making the decisions because he knows I’ll do a good job, so I do most of the DIY.”

“I’m a big fan of vintage magazines and a lot of my inspiration comes from those as well as photoshoots, old adverts and books from that time period where they are showing you something that is not real.

“That’s basically my idea, it’s a take on a fantasy of what the 70s looked like.”

Every single item in Estelle’s house is second hand – apart from the mattresses.

“Everything is second hand. The only things that aren’t are our mattresses because no one wants to sleep on a 50-year-old used mattress,” Estelle said.

“One of the things people always comment on is our Keracolor, it’s a big space age TV and they were designed and made in Manchester and Cheshire in the 1970s.

“People also love our room divider. I’ve never seen one like it and nobody on the internet seems to have one that we know of, so that’s very unique.

As a huge fan of Christmas, Estelle completely transforms her home into a festive 70s paradise – and begins her preparations a year in advance.

“Christmas is the most wonderful time of the year. I start planning my decorations in January and then source things throughout the year whilst shopping at charity shops and car boot sales,” she said.

“My external decorations change every year and this year we’ve gone for a giant Quality Street theme. All the Quality Streets I’ve made myself out of old packing boxes covered with foil and cellophane. I have a huge Quality Street arch over my door and also one in the living room to match.

“I put up all the decorations myself. It took me a day to do the outside and then inside took around a day and a half inside. The rest of the internal decorations are all vintage which I rotate each year and I like to think I’ve got those down to a fine art now.”

Estelle has one decoration which stems right back to the 1890s – and another with a sentimental meaning.

“All the decorations are second hand – everything from the foil decorations down to the tinsel tree and the baubles,” she explained.

“The majority of the decorations are from the 1920s right through to the 1980s. Some of those decorations have seen over 100 Christmases which is crazy.

“My oldest decoration is from the 1890s. I found it at the bottom of a box of Christmas decorations at Bolton car boot sale for 20p.

“My favourite decoration is the Pipsie. When I was little my dad brought home a box of junk from an auction and there was one at the bottom which was a little felt decoration from Japan.

“When I was like a year old, I couldn’t say pixie so I called him Pipsie. He’s been the tree Pipsie ever since and our family tradition is that he always sits at the top of the tree and guards it at night from evil spirits.

Estelle says that she knows her Christmas decorations aren’t to everybody’s taste – even her family’s – but that they make her happy.

“It’s a maximalist Christmas in my house, it looks like Christmas has vomited on the house. It’s a sight to behold and I love it,” she said.

“It’s not to my family’s taste. My sister’s very much a scandi minimalist and my mum hates those dangly foil decorations which are all over my house.

“I grew up with very much natural decorations but I always longed for the really tacky Christmas decorations. They remind me of my grandparents because they had those sorts of decorations, my grandad would let me put up his Christmas tree as a kid in June.

“I’ve always loved Christmas. It’s that nostalgia feeling, the glass bells that tinkle in my house always remind me of my grandad.”

Estelle set up her Instagram account @70shousemanchester three years ago whilst renovating her home, and it has now amassed more than 100,000 followers.

“It has grown quite organically over the years, I started posting pictures as a scrapbook to show what we’ve done but in lockdown the followers really grew exponentially,” Estelle said.

“I just think people had a lot more time on their hands and were spending most of it sitting around on their phones.

“I’ve met some amazing people on Instagram that I would never have met without social media. I know it can be responsible for a lot of ills in the world but there’s also a strong sense of community and it’s a place to meet like-minded people.

“I’ve been very fortunate with not getting a lot of hate. I’ve got the old comment. Some woman last Christmas took the time to tell me how ghastly my Christmas decorations were and I was like, ‘Well, thanks for that’. They are ghastly, I’m the first one to admit it, but they’re fun.”

Estelle, who appears as one of the specialist dealers on BBC’s The Bidding Room, has gone on to write her own book ’70s House’ which is due to be released on March 30, 2023.

“The weird thing about it all is that I never intended for it to become my career. I never thought I’d even get to 100 followers let alone 100,000 followers, a book and TV work,” Estelle explained.

“I love my home. It’s a reflection of my personality, it’s eclectic, bold, happy, nostalgic and sentimental.

“We’ve made it very much a joyful, safe sanctuary, so when you come back here from whatever you’ve been doing, it’s always a happy home and that’s what I love most about it.”

Want to get involved in Where I Live? If you are interested in featuring in our weekly series, please email your name and details to [email protected].

Sign up to our free weekly property newsletter by clicking here