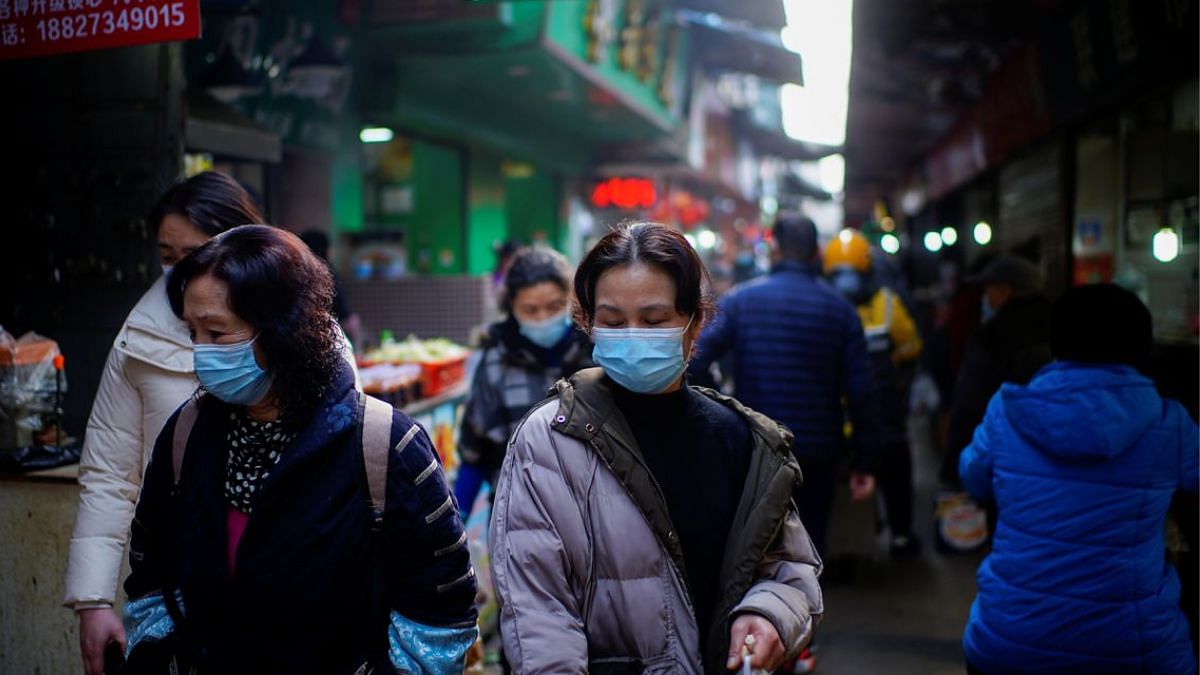 Speculation about China’s Covid-19 death count is rife. The country’s National Health Commission estimated that the virus infects 37 million people a day. Beijing will stop sharing daily Covid data as it targets herd immunity. India and China held the 17th round of military talks on the Chinese side to resolve issues in Eastern Ladakh. A new section of the China-Russia Power of Siberia 2 gas pipeline has been launched. Chinascope brings you the last newsletter edition of 2022.

China over the week

China’s National Health Commission held an internal meeting on Wednesday, which became an instant headline around the world, according to reports by Bloomberg. The health body said in internal discussions that as many as 37 million people in China might have been infected with Covid on a single day last week.

According to minutes of a health body’s meeting seen by Bloomberg, as many as 248 million people—almost 18 per cent of the population—likely contracted the virus in the first 20 days of December.

But what has caught the world’s attention are reports of a rising death toll linked to the new Covid surge.

“There have been so many people dying,” said Zhao Yongsheng, a funeral home worker, according to the Associated Press. “They work day and night, but they can’t burn them all,” Zhao Yongsheng added.

Reporters working for Associated Press could witness the crematoriums southwest of Beijing city in Gaobeidian receiving a large number of ambulances.

Just over an hour’s drive from Beijing, the hospital hallways are packed.

“At Baoding No. 2 Hospital, in Zhuozhou, Wednesday, patients thronged the hallway of the emergency ward. Patients were breathing with the help of respirators. One woman wailed after doctors told her that a loved one had died,” reported Associated Press.

People are bombarding Chinese social media sites with comments like “everyone I know has it”—the ‘it’ meaning Covid.

Now, Beijing has said only those who have died directly because of respiratory failure caused by the virus will be counted as Covid related casualties.

“So limiting a diagnosis of death from Covid to someone with a Covid -positive test and respiratory failure will underestimate the true death toll associated with Covid,” said the World Health Organization (WHO)’s emergencies chief, Michael Ryan.

WHO has attributed the massive surge in Covid cases to the Omicron-linked subvariant outbreak, which had been held back because of various zero Covid policies.

Despite cases raging across Chinese cities, the Beijing government continues to bring down Covid barriers. The hashtag ‘National health and medical commission will not publish daily epidemic information’ started to go viral on Sunday and reached 60 million views. It was also the top trend on Chinese search engine Baidu.

The decision to stop publishing daily data will raise questions about Beijing’s sincerity in informing its citizens, as well as the international community, about the Covid situation.

Finding accurate information has been difficult since the beginning of the pandemic – and remains the case.

Sixth Tone, a Chinese State media platform published in English, was censored over a news story about the undercount of Covid deaths – a taboo topic.

The Sixth Tone had reported on the social media post by Chinese actor Wang Jingsong in which she said her mother died after catching Covid. Weibo users responded to the post by telling stories about elderly grandparents succumbing to the virus. The report was quickly censored to stop the spread of China’s high death toll worldwide.

Meanwhile, India has announced that travellers from China, Hong Kong, Japan, South Korea, and Thailand must present a negative Covid test report before entering the country.

During his latest ‘Mann Ki Baat’, Prime Minister Narendra Modi asked people to “be vigilant” as they head for travel during the holiday season.

China’s military activities in the South China Sea and the Taiwan Strait got extensive international media coverage. But we didn’t hear about the US’ military presence in China’s immediate neighbourhood as much.

A China-linked think tank has now claimed that the US sent 589 military aircraft from January to November to conduct information-gathering activities just over the South China Sea.

The sounds of unease in Beijing over Russia’s Ukraine war have circulated in media headlines over the past months.

Last week, former Russian president Dmitry Medvedev was on a surprise visit to Beijing for talks with President Xi Jinping.

Medvedev remains a close ally of current President Vladimir Putin. We have seen Russian business tycoons and former politicians being used for diplomatic back-channel talks since the Ukraine war started.

Unlike the past meetings between Russian and Chinese leaders, there was no mention in the Chinese readout of the ‘no limits partnership’, which has been the guiding principle of relations between the two countries. Even Chinese foreign minister Wang Yi didn’t mention ‘no limits partnership’ in his annual address—which has consistently appeared in joint statements issued by Russia and China in recent years.

Instead, Xi brought up the Ukraine war, which the Chinese State media mentioned in the readout given to him.

“On the Ukrainian crisis, China has always decided its position and policy according to the merits of the matter itself, upholding an objective and impartial position and actively persuading and promoting peace talks. We hope that all parties concerned will exercise rational restraint, engage in comprehensive dialogue and resolve common security concerns through political means,” said Xi during his meeting with Medvedev.

The unease in Beijing has been expressed by other Chinese diplomats as well. Fu Cong, the new envoy to the European Union (EU), has admitted that Russia’s war in Ukraine has put Beijing in a “very difficult position”.

But how do we interpret these murmurs of unease?

“The symbolism of Medvedev’s visit was likely more important than the substance of anything discussed. With the war in Ukraine at an inflection point, Beijing may be leaning harder into a ‘pro-Russia neutrality’ posture”, wrote Joe Webster, senior fellow at The Atlantic Council, a think tank in Washington DC.

Besides the meeting between Xi and Medvedev, China and Russia brought online a new section of the Power of Siberia pipeline.

As part of the project, the two sides launched an 800-km-long new gas pipeline from the Kovykta field in Irkutsk to the Chayanda field in the Republic of Sakha.

“This (new) section will complement the Power of Siberia main gas pipeline, thereby bringing our most important gas transportation route into operation throughout its entire length. It will exceed 3,000 km,” said Putin.

According to an estimate by The Kremlin, the Kovykta field has approximately 1.8 trillion cubic metres of natural gas and 65.7 million tonnes of gas concentrates. Russia will sell this gas to Beijing.

The Chinese side has sent “five ships from the PLA Navy’s East Sea and North Sea fleets, including CNS Baotou, a Type 052DL guided-missile destroyer, and CNS Binzhou, a Type 054A guided-missile frigate, would participate in the exercise along with submarines, early-warning aircraft and helicopters from the Chinese navy,” said Senior Captain Gao Xiucheng.

Australia and China have sparred over the issue of tracing the origins of the pandemic. Beijing has detained two Australian citizens, journalist Cheng Lei and writer Yang Hengjun, on the grounds of national security.

“China appreciates the positive intention that the new Australian government has shown multiple times to improve and develop our bilateral relations,” said Wang Yi during the meeting with Wong on 21 December.

When Wong became foreign minister after the election of Anthony Albanese as the Prime Minister, there was an expectation that she will take a different approach from her predecessor. Now Australia appears to be engaging in Canada-style negotiations to get its citizens out of Chinese detention.

“In the past few years, China-Australia relations have encountered difficulties and setbacks, which we do not want to see, and we must fully learn from them. China and Australia have neither historical grievances nor fundamental conflicts of interest. They should and can become mutually needed partners,” said Wong.

Also read: German Chancellor goes to China, may have played into Xi’s ‘divide and rule’ approach for EU

After a long lull in military-level dialogue between India and China, the 17th round of the Corps-Commander-level talks was held on the Chinese side of the Chushul-Moldo border meeting point on 20 December.

The two sides issued a joint statement after the meeting, which was made public on 22 December.

“They had a frank and in-depth discussion, keeping in line with the guidance provided by the State Leaders to work for the resolution of the remaining issues at the earliest, which would help in the restoration of peace and tranquillity along the LAC in the Western Sector and enable progress in bilateral relations,” said the joint statement published by the PLA on their website.

Wang Yi’s annual foreign policy address on Sunday gives us an insight into international issues that have kept Beijing busy during the year.

“China and India have maintained communication through the diplomatic and military-to-military channels, and both countries are committed to upholding stability in the border areas. We stand ready to work with India in the direction toward steady and sound growth of China-India relations,” he said.

Following the clash in Tawang, a video from 2021 showing Indian Army and PLA soldiers sparring somewhere in Arunachal Pradesh circulated on social media. The video was shared on Weibo and hasn’t been censored despite visuals of the PLA retreating from their position.

In the past, leaked videos have been used by Beijing to stir up Chinese public sentiment, and it is possible that the decision to allow this video to exist is a calculated move to exploit it for another purpose in the future.

Late on Sunday, news agency ANI reported citing defence sources that Ministry of Defence had cleared the purchase of over 100 Pralay tactical ballistic missiles for deployment at the Line of Actual Control.

Must read this week

Mary and Jesus in the Eyes of Chinese Painters – Sheng Wenqiang

The latest flashpoint on the India-China border: Zooming into the Tawang border skirmishes – Nathan Ruser and Baani Grewal

‘I stopped saying Xi’s name out loud’: Why The Telegraph’s correspondent had to flee China – Sophia Yan

Also read: China’s JL-3 missile can’t cover the US mainland. But it has implications for India

Professor Jabin Jacob is one of India’s leading China watchers who tries to communicate his research on Chinese politics and China’s international affairs with the media. Professor Jacob spoke to The Hindu’s Amit Baruah about the Arunachal Pradesh clash and decoded the meaning behind China’s aggressive approach in the Tawang sector. Chinascope recommends listening to the conversation.

Chinascope will return in the new year to bring insights from a transforming China.

The author is a columnist and a freelance journalist. He was previously a China media journalist at the BBC World Service. He tweets @aadilbrar. Views are personal.