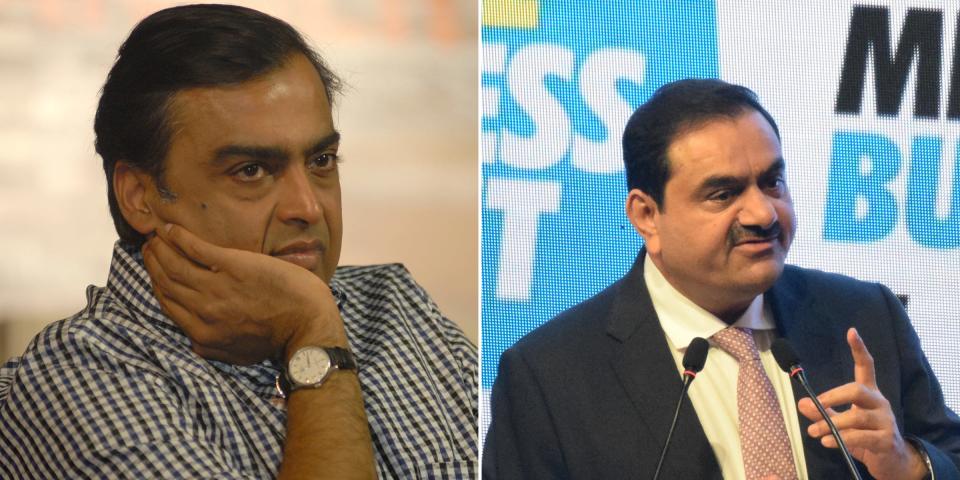 Asia’s 2 richest men have multiplied their fortunes since 2020, but they’re known to spend them very differently. Here’s how the tycoons’ wealth, businesses, and properties stack up.

Editor’s note: This story was first published in August 2022 and has been updated to reflect the most recent financial figures.

Billionaires Mukesh Ambani and Gautam Adani are both central figures in the rapid growth of India’s industries.

Mukesh Ambani and Gautam Adani have both seen a meteoric rise in their wealth in the last decade as they’ve dominated India’s energy, infrastructure, retail, and defense development industries.

But it’s in the last three years that the pair has seen its fortunes roar to heights unprecedented in Asia.

Adani, whose personal wealth grew from around $13 billion in 2020 to $110 billion as of December 27, is now the third-richest person in the world, per Bloomberg’s Billionaire Index. That puts him and his fortune ahead of Jeff Bezos, Bill Gates, and Warren Buffett.

Ambani is currently the world’s ninth-richest person, with a net worth of $85 billion as of December 27, per the index. He’s still seen a great leap in wealth since 2020, when he was worth around $32 billion.

We took a look at each of the two billionaires’ business empires, fortunes, and real-estate investments. Representatives for Ambani and Adani did not respond to Insider’s requests for comment.

NET WORTH: Gautam Adani is the only top 10 billionaire who grew his personal fortune this year.

Amid a rocky economy and a post-COVID slump for most of the world’s richest people, Adani is the standout this year. He made $33.8 billion over the last 12 months, according to the Bloomberg Billionaires Index.

That makes him the only top 10 billionaire to post gains this year so far, while high-profile plutocrats like Elon Musk and Jeff Bezos lost $132 billion and $84 billion respectively, per Bloomberg.

Once a college dropout, Adani overtook Ambani in February as the richest man in Asia, after his wealth skyrocketed by $12 billion in the first two months of 2022.

He was briefly the world’s second-richest person in September, behind only Elon Musk’s then-$263.9 billion fortune, according to Bloomberg. But he was later knocked down from the spot after Louis Vuitton founder Bernard Arnault enjoyed a post-COVID boost in luxury brand sales.

Ambani is currently worth $85.4 billion, making him the second-richest person in Asia, according to the Bloomberg Billionaires Index. He nearly tripled his wealth during the pandemic — his net worth was around $36 billion in 2020, per Forbes.

The Adani Group, founded in 1988, is Adani’s multi-industry powerhouse firm based in India. Its share price has jumped nearly 20-fold since August 2020, and the company hit $260 billion in market value in September.

Adani Group’s ports and terminals are its hallmark trade. Adani first developed a port in 1995 in his home province of Gujarat, and it claims to be India’s largest private commercial port. It now operates alongside 12 other Adani ports and terminals along India’s coast.

Adani’s recent success is often attributed to his companies moving in lockstep with India’s leadership.

Modi has also established a vision for India to boost its defence equipment exports and lower its dependence on foreign military supplies. Meanwhile, Adani Group has started developing UAVs, small arms and ammo, and counter drone technology, helping it secure contracts with the Indian Armed Forces.

Ambani’s Reliance Industries is a heavyweight in oil and gas. It also owns India’s biggest telco.

Ambani’s Reliance Industries started growing exponentially around 2014, according to its annual reports, putting it ahead of the Adani Group in its rise to prominence.

In 2020, it became the first Indian company to cross an estimated $200 billion in market value, although the Adani Group also achieved that milestone this year.

Reliance Industries has delved into fewer sectors than the Adani Group, focusing instead on several core pillars such as gas production, media and entertainment, digital services, retail stores, and oil refinement — its biggest business, per its 2021-2022 annual report.

The 38-year-old company operates India’s largest telecom network through Jio Infocomm, which has grown by 120 million subscribers since the pandemic began.

Its vast retail network of 15,000 branded stores for toys, jewelry, clothing, and groceries covers at least 41.6 million square feet in total, per its annual report.

SPENDING HABITS: Adani keeps his wealth and assets low key, but reports say he owns at least three private jets, travels by chopper, and has a $50 million bungalow.

Little of Adani’s lifestyle or spending is publicly known. Older news reports, such as a 2011 article from India’s Economic Times, say Adani built a helipad in his home and regularly travels via helicopter instead of on the road.

The Economic Times reported that one of these choppers is the Agusta Westland A139, a 15-seat twin-engined helicopter that’s marketed as both a luxury travel option as well as a vehicle for law enforcement or fire and rescue work. The chopper can cost up to $9.65 million, according to aircraft sales website AVBuyer.

In 2012, the outlet reported that Adani owns three private jets — a Canadian Challenger 605, an Embraer Legacy 650, and a Hawker Beechcraft 850XP.

NDTV reported in 2020 that Adani purchased a $50 million residential property in New Delhi, citing a bid by his company. But while Ambani has given tours of his luxurious home before, the exact location and features of Adani’s home are not publicly known.

On social media, Adani shies away from flashy posts. One of the only personal photos he’s ever tweeted was of him and his family celebrating his birthday with a cake at home.

Ambani’s family lives in a 27-floor mansion replete with helicopter pads, a snow room, and a garage for 168 cars.

Ambani’s home, fleet of luxury vehicles, family events, and vacations have been the subject of vast public scrutiny.

He and his family live in Antilia, a 400,000-square-foot mansion with 27 floors, three helipads, a 168-car garage, nine elevators, and a snow room, per Architectural Digest.

According to The South China Morning Post, it takes around 600 staff to run Antilia and maintain its ballroom, temple, and 50-seat theater.

The outlet also reported that Antilia is outfitted with a snow room that pumps artificial snow on demand, as well as its own ice cream parlor.

Ambani made international headlines in 2018, when it was said that the wedding of his daughter, Isha Ambani, cost around $100 million. The 600 attendees of the high-profile event included Beyoncé, Hillary Clinton, Bollywood legend Shah Rukh Khan, and Huffington Post founder Arianna Huffington.

Recently, Ambani booked his family into suites at Switzerland’s luxurious Bürgenstock Resort at around $74,000 per night in July.

Ambani and Adani grew their empires separately for years, but in 2022 signs emerged that a momentous clash could be drawing ever closer.

Though they operate in some of the same industries, Adani and Ambani’s gigantic multi-sector companies have largely steered clear of direct competition with one another.

They dodged a clash over a telecommunications bid in August, when Adani was said to be keen on vying for India’s first 5G airwaves — new territory for him, but one of Ambani’s main pillars of business. He ultimately declined to challenge the bid, Bloomberg reported.

Still, the rapid growth of each billionaire’s business territory has given rise to speculation that the two giants will eventually go head-to-head over a massive deal, Bloomberg wrote.

Adani and Ambani’s companies have been competing for other smaller deals this year, such as when they both tried in November to acquire the beleaguered Future Retail, which was once India’s second-largest retail company but defaulted on its loans.

Ambani’s Reliance landed the purchase, though it later dropped the deal because Future Retail’s creditors didn’t approve of its $3.4 billion offer.

In the same month, Adani’s and Ambani’s groups both expressed interest in purchasing the same assets from an insolvent energy company, Lanco Infratech.

But both backed off from the auction on December 1, citing concerns over a reported violation in the sale process, local media reported.