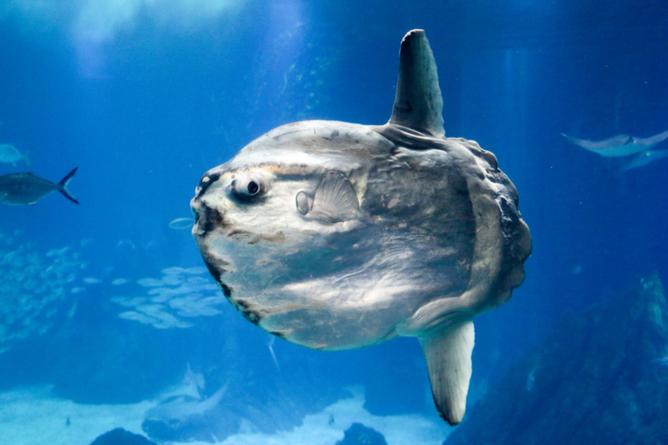 You may remember a rant that went viral a few years ago about the “world’s dumbest fish” the ocean sunfish (scroll down for said rant), well that fish knocked a whole freaking boat out of the Sydney to Hobart yacht race on Monday afternoon.

The rant, which was shared more than 70,000 times on Facebook, sees Scout Burns call the sunfish the “biggest joke played on Earth”, “useless” and “floating garbage”.

Her rant prompted the nerdiest debate on social media with marine biologists chiming in to say the sunfish was an evolutionary marvel — citing the fact the fish grows so huge eating just jellyfish.

And this fish is seriously huge, the average weight of a sunfish is about a tonne.

The mola mola, as it’s also known, is called the “toppled car fish” in Taiwan, the “swimming head” in German and “cut short” in the Philippines.

The Taiwanese aren’t wrong with their description, the Guinness world record for heaviest bony fish goes to the sunfish with one of the heaviest weighing 5071 pounds, and measuring six to 10ft.

Anyway, back to the Sydney to Hobart, sailor Louis Ryckmans said he’d dismissed all the “tall tales” he’d heard about the sunfish.

His 40ft vessel Yeah Baby won the two-handed line honours during last year’s race but came off second best against this fish.

“I’ve heard all the stories in this club about people who have had impacts with sunfish and I’ve always thought it was one of the dock stories,” Ryckmans told AAP after the boat returned to Sydney on Tuesday morning.

“We had an impact where my immediate thought was we hit a reef; it was that powerful. I happened to be in the back of the boat and turned around and there was a spluttering sunfish in the water that was probably worse for wear.

Ryckmans did not account for a big dumb fish ruining his race.

“On the high list of worries that one has, marine life did not occur to me once,” he said.

“I think the name is incorrect. It’s a sun leviathan, it’s a sun monster, it’s no fish.”

Ryckmans should have heeded Burns’ rant, in it she warns of their stupidity.

“”If they are so huge, they must at least be decent predators.’ No. No. The most dangerous thing about them is, as you may have guessed, their stupidity,” Burns wrote.

“They have caused the death of one person before. Because it jumped onto a boat. On a human. And in 2005 it decided to relive its mighty glory days and do it again, this time landing on a four-year-old boy.”

Anyway, you can read the rant below and once more revel in the marvel of the world’s dumbest fish.