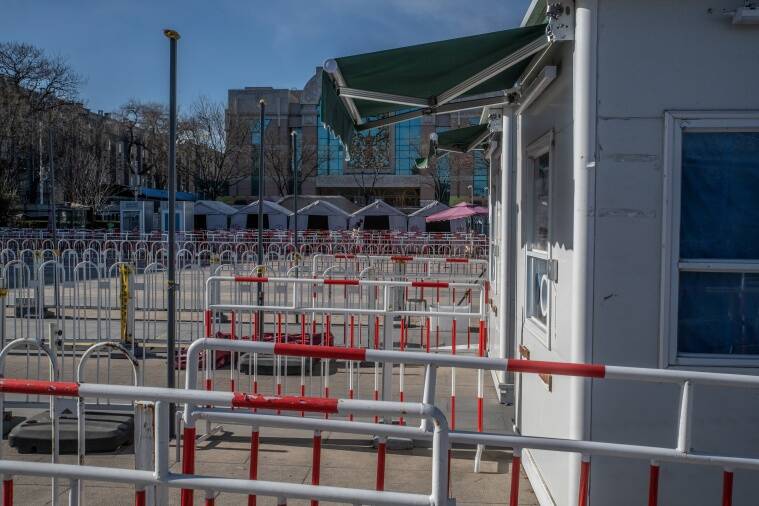 In its single-minded pursuit of the “zero-COVID” strategy, the Chinese government was omnipresent and omnipotent, using its unlimited resources and unchecked power to control the nation. After having nearly exhausted its resources and the goodwill of the public, the government has now simply disappeared, just as many Chinese are getting very ill with the virus or dying from it.

For much of this year, Yang, an engineer in Shenzhen, took COVID-19 tests nearly every day, from one of the more than 40 government-built booths in his neighbourhood. Whenever he missed one, he would get text reminders from his district. After buying pain relief medication, he got calls from three different community workers because the state had strict rules about the sale of such over-the-counter drugs.

Testing booths, which have been empty throughout China since the government abandoned its “zero COVID” policy, in Beijing, Dec. 17, 2022. (Gilles Sabrie/The New York Times)

Since the Chinese leadership abruptly abandoned its stringent “zero-COVID” policy several weeks ago, Yang has rarely heard from the government.

“No one is in charge now,” said Yang, who asked to be identified only by his surname because of safety concerns. His daughter’s school was still open last week even though most students were staying home, either because they were ill or worried about getting sick. There’s no national mask mandate. People with mild symptoms are showing up at work because no one bothers to check in on them anymore. Medicines are in short supply, so Yang is sharing what he has with friends. His family has four rapid test kits, which are being saved until they’re really needed. 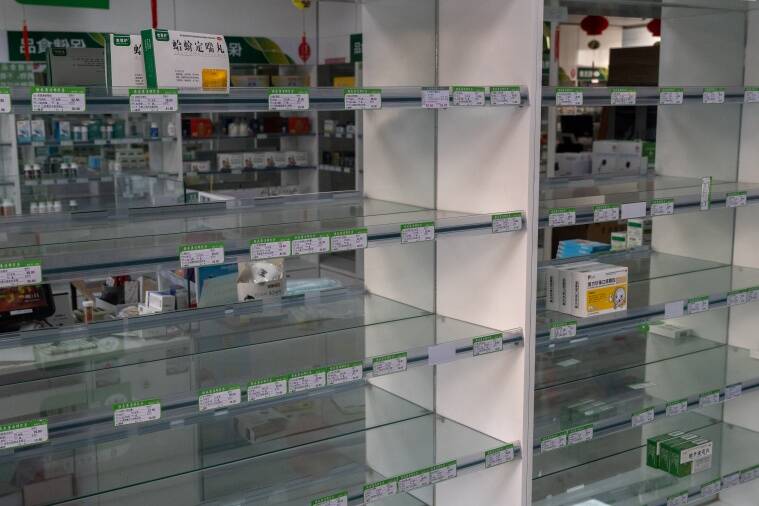 Nearly empty shelves at a pharmacy in Beijing, the capital of China, where every day millions of people are being infected with the coronavirus, Dec. 20, 2022. (Andrea Verdelli/The New York Times)

For a powerful government that likes to brag about its command of the country and has published a four-volume compilation of speeches and articles by its top leader titled “Xi Jinping: The Governance of China,” the absence of direction at a moment of crisis has made the public question the legitimacy and the credibility of the Chinese Communist Party.

It also highlights a crucial but not always obvious distinction in leadership.

“The ability to control is different from the ability to govern,” Chen Tianyong, an entrepreneur, wrote on his social media WeChat timeline last week. 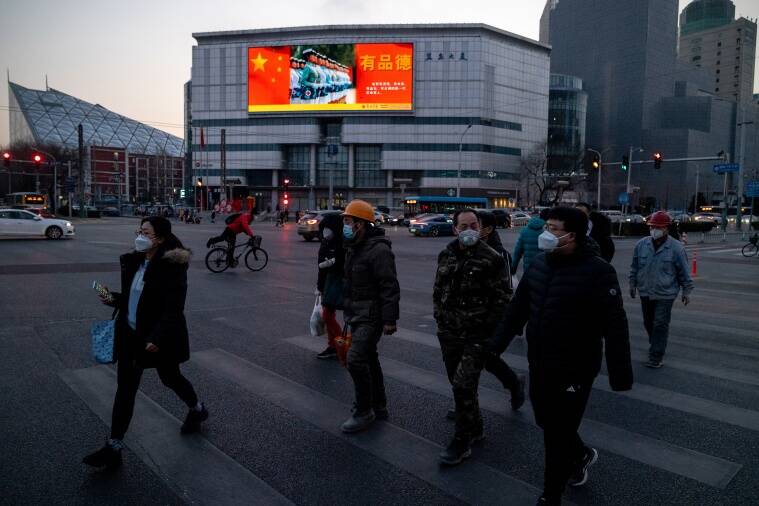 If good governance is about transparency, responsibility, accountability and responsiveness to the needs of the people, the Chinese government has barely practiced it, either in its harsh “zero-COVID” policy, or in its haphazard reopening.

It could have spent its resources on increasing vaccine coverage among older people and adding intensive care unit beds. Instead, it spent money on mass COVID testing and building enormous quarantine camps. 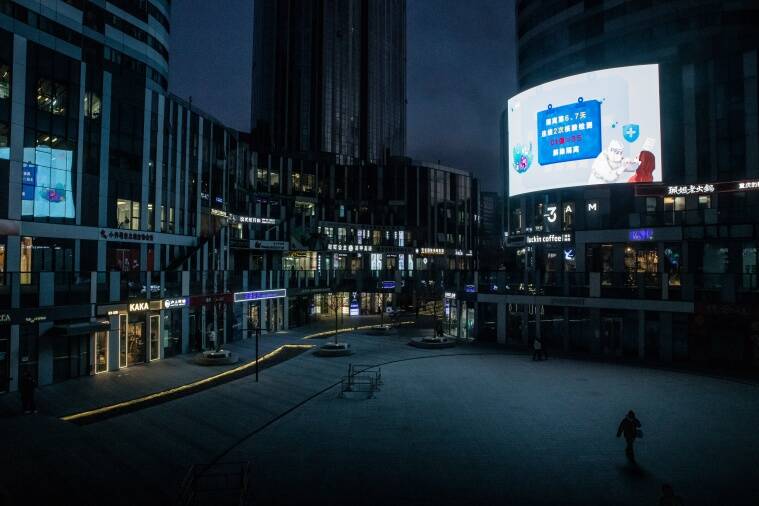 It could have communicated scientific facts about symptoms and death rates of the omicron variant. Instead, it fanned fears about COVID.

It could have stocked up on fever medicines and provided the public with the best vaccines available. Instead, it made it extremely difficult for people to buy antipyretics and didn’t approve the public use of foreign mRNA vaccines, which have proved more effective than the Chinese ones in preventing severe symptoms.

Unlike many governments that took steps to flatten the infection curve before reopening, the Chinese government suddenly let go of nearly all restrictions, most likely an effort to rush an enormous country to herd immunity while leaving the old and vulnerable in precarious situations.

Its main advice to the public: “You’re in charge of your own health.” The slogan has since earlier this year been promoted and repeated by state media and local governments since the reopening.

But the pandemic is a public health crisis, and such crises are part of the reason governments exist.

The change in pandemic control strategy doesn’t mean the government “can sit on its hands,” Wu Jinglian, a top Chinese economist known for advocating for smaller government, told the Caixin magazine. It “must avoid going from one extreme to the other.”

Qin Liwen, a former journalist, wrote on her WeChat timeline: “Only when a government does what it’s supposed to do, can the people be responsible for themselves.”

The local governments haven’t been doing much either. Many officials are probably waiting for guidance from their superiors. “Zero-COVID” could be quantified so everyone knew what to do. In a top-down system like the Communist Party, the underlings are often at a loss for what to do when the big boss doesn’t set a goal.

For weeks, Xi said nothing about the end of the country’s “zero-COVID” policy, which was considered his signature campaign. On Monday, in his first public comment on the dismantling of “zero-COVID,” Xi was vague, saying that China’s epidemic prevention and control was facing new situations and tasks. He urged the public to “develop good personal hygiene habits” and “practice a civilised and healthy lifestyle.” His remarks didn’t mention either the high infection rates or the death counts.

It would be wise for the officials to wait for his directive. But the public can’t wait.

“The virus wasn’t eliminated to zero,” a recent Weibo comment said. “The government’s credibility has been reduced to zero.”

A widely circulated WeChat article speculated that the shortage of fever medications reflected the government’s lack of preparation for loosening control. And if the government had shown the same political will that it had in implementing “zero-COVID,” the article argued, it could have ensured there was ample supply of such medication.

“It doesn’t care about the ordinary people, leaving them to fend for themselves and even delighting in their chaos,” the article said, and it urged officials to show up where the public most needed them to win back trust.

The low confidence in the government is forcing people to help themselves and help one another. In local WeChat groups, people made arrangements to share their fever medicines and rapid test kits with their neighbours.

Tencent, the social media giant, also built a WeChat program where people could ask for medications from strangers with extra. The help requests are modest: six tablets of acetaminophen; four tablets of ibuprofen; two rapid test kits; one thermometer.

They are asking strangers for help because they’re not getting it from their government.

“Don’t expect anything from Leviathan — there’s no point in appealing, either,” Chen Min, a former journalist better known by his pen name, Xiao Shu, wrote on his WeChat timeline, referring to the central government. “In the end, we have to help ourselves.”

Only by building an extensive network of social connections, he continued, “can we weave a real social safety net in the darkest moment, build a real Noah’s Ark and save countless lives.”

This is exactly the type of governance crisis about which Xi had once warned the party.

“It is not up to us to judge our party’s governance capacity or performance; they must and can only be judged by the people,” Xi said in a speech in 2013. “If we are pretentious and divorce ourselves from the people or put ourselves above them, we will surely be abandoned by them. This is the case for any party, and is an iron law which admits of no exception.”