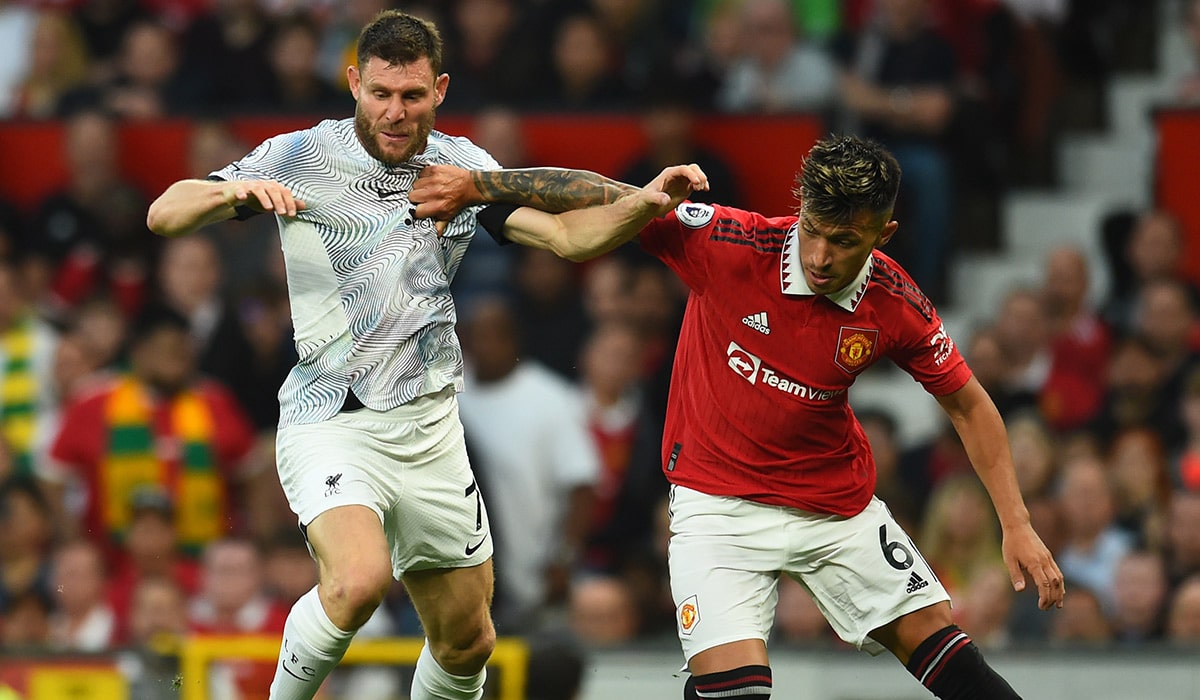 On Sunday, February 9, 1986, Liverpool and Manchester United faced each other at Anfield. It was billed as potentially decisive in a delicately-poised title race although the world was spared hyperbolic taglines such as Judgment Day back then.

Still, it felt pivotal in a campaign which Ron Atkinson’s United had begun by winning their first 10 matches. At one point, the Red Devils were 10 points clear of Liverpool and 17 ahead of Everton, the defending champions. Hopes had been high that the 19-year title drought at Old Trafford was about to end. However, by the time they arrived in Anfield, they had slumped to second, behind Everton, with Liverpool on their coat-tails.

Broadcast live on BBC 1, what unfolded left a bad taste. As the Manchester United team bus pulled into the stadium, it was attacked by rival fans, and Clayton Blackmore was hit with tear gas. The scenes were the main headline on the evening news, allowing Margaret Thatcher’s government to highlight another stain on the once beautiful game.

The match itself was overshadowed, but the 1-1 draw served Liverpool better as they went on to complete a league and cup double that season under rookie manager Kenny Dalglish. And for those watching in this country, there was a real sense that Irish players were crucial to what was happening on the field.

English football’s biggest game never felt more Irish than it did in the 1985-86 season. The clubs met three times over the course of that season, including an FA Cup tie, and Ireland was the most represented nation in each game.

Seven players, north and south, were on the pitch at Anfield that fraught February afternoon. Mark Lawrenson, Ronnie Whelan and Jim Beglin on one side; Paul McGrath, Kevin Moran, Frank Stapleton and Norman Whiteside on the other. It felt like Ireland had ownership of the game.

Time has moved on. What was once English football’s Irish derby has now become the world’s local derby. Across the globe this afternoon, from Kenya to Hong Kong and Malaysia to Nigeria, all eyes will be on Anfield. It still means a lot in this country – this afternoon might be an opportune time to take that break from social media – but Irish interest is now mostly confined to the rising blood pressure of supporters watching from afar.

It seems pretty unlikely we will ever see seven Irish players involved in English football’s biggest fixture again. Even having one, with Caomihín Kelleher sitting on the Liverpool bench, feels like an event worth celebrating.

Irish links to the two clubs go back more than a century, but they are increasingly based in the past, rather than the present.

When Paddy McNair left Manchester United for Sunderland five years ago, it meant that it was the first time since 1936 that no player from this island was in the United first-team squad. Kelleher’s emergence, and his excellence in deputising for Alisson, has made him the first Irish first-team player for Liverpool since Robbie Keane’s unhappy spell at Anfield, characterised by his failure to see eye-to-eye with Rafa Benitez.

Keane was the last Irish player to represent Liverpool in this storied rivalry, while Jonny Evans was the last player from the island to be involved, playing for Manchester United in December 2014. Before that, it was John O’Shea, whose last taste of this fixture came a decade ago.

O’Shea was also responsible for the last truly memorable Irish moment in the fixture when, in March 2007, he scored a 90th-minute winner into the Kop goal, a strike which proved instrumental in United winning the league that season. Mancunian Gary Neville would later inform O’Shea that he had ‘lived his dream’.

For as long as these clubs have existed, there has been a link to Ireland. It grew organically from the fact that these two northern English cities had an influx of Irish immigration, particularly in the 19th century.

Liverpool has long been called Ireland’s second capital, with around 75% of its population believed to have some Irish ancestry. The building of the Manchester Ship Canal and development of that city as the first modern industrial powerhouse coincided with emigrants fleeing the famine.

A slew of Irish navvies flooded the growing city around that time – especially from the west of Ireland – and at one point, more than 25% of its population had come across the Irish Sea. This was reflected in the supporters of Newton Heath, the early incarnation of United, most of whom were Irish Railway workers. When the name was changed in 1902, the club was almost called Manchester Celtic.

Meanwhile, 30 miles up the road, the name of Liverpool’s iconic stadium came from a townland outside New Ross, by virtue of Wexford’s Robert Samuel Graves, who was the first Irishman to become mayor of an English city and was later returned as an MP for Merseyside.

The club’s first director of football was John McKenna, a Monaghan man, while Liverpool’s first manager after the First World War was David Ashworth, who hailed from Waterford.

Even though Everton were considered the ‘Irish’ club in Liverpool in the first half of the 20th century, their cross-city rivals maintained plenty of links to the homeland. Those links were strengthened when Bill Shankly, followed by Bob Paisley, built the all-conquering sides of the 1970s and 1980s.

While United’s powerful grip over Irish allegiance is often traced back to the Munich air disaster and George Best’s role in the 1968 European Cup-winning side, it started in 1936 when then club director Louis Rocca came across a gifted teenager called Johnny Carey playing for St James Gate.

Rocca was so taken by Carey that he signed him instantly and brought him to England on the ferry.

He would become the club’s first Irish superstar, the Roy Keane of his day and Matt Busby’s first captain at the club. Through their former player and renowned scout Billy Behan, United often had first call on talent coming through in Dublin. Liam Whelan, from Cabra, was one of the most highly-rated of the Busby Babes, and his death in Munich only tightened the emotional connection between the club and Ireland, particularly Dublin.

Behan would also discover Johnny Giles, but the uneasy relationship he had with Busby meant his star shone brightest when he moved from Old Trafford. Still from Carey and Whelan, there has been a series of towering figures within Irish football who have made their mark at United. Noel Cantwell, Shay Brennan, Tony Dunne, George Best, Gerry Daly, Kevin Moran, Frank Stapleton, Norman Whiteside, Paul McGrath, Denis Irwin and Roy Keane. Some of the most famous figures in all of Irish sport have worn the red shirt.

With their rivals up the road, it took a stylish winger named Steve Heighway to break into Shankly’s team in 1970 to re-establish the playing link between Liverpool and Ireland. Despite being a late bloomer, the Dubliner won a slew of honours in the next ten years, including two European Cups and four league titles.

If Heighway broke the mould, others followed. And in the Liverpool teams that dominated the 1980s, Mark Lawrenson, Ronnie Whelan, Jim Beglin, John Aldridge and Ray Houghton followed his lead. Heighway was also director of the famed Liverpool academy for years and under him, the club produced Robbie Fowler, Steven Gerrard and Jamie Carragher. Heighway was also known to give Irish kids a chance, Darren Potter was youth team captain under him for example.

However, it is clear that both Liverpool and United don’t view Ireland as a hotbed of talent, as they may have done in the past. Some of this is down to circumstance.

The scouting networks of both clubs have changed drastically over the past decade or so, and they are casting their net much further afield now – although whether the implications of Brexit curb that development, remains to be seen.

There’s an argument that Liverpool and United now aren’t too concerned by their old traditional links and think in more worldly terms. Both clubs now look for young players who can do almost everything. And when Irish players are in the system, they may no longer get singled out – as was the case when Keane was club captain at Old Trafford or Heighway was over the Liverpool academy.

In 2020, Mullingar teenager Deji Sotona, clocked as the fastest player at United that year, was allowed to leave Old Trafford for Nice in France’s Ligue 1, a situation that would have been unlikely to happen to an Ireland under-age international when Keane exerted such influence at the club.

Of course, there may also be an issue with the type of players that are being produced on this island and whether they have the raw talent to survive in the academies of Carrington and Melwood. Gary Neville was asked about the lack of Irish players at United and Liverpool on a visit to Dublin a few years ago.

‘It’s not just an Irish issue,’ Neville said. ‘It is a Welsh issue and a Scottish issue, the younger players are competing with talent from all over the world, which they weren’t before.’

It is necessary to move down the food chain to find clubs interested in Irish talent.

The Premier League games with the most Irish representation now are likely to be relegation scraps, such as Sheffield United against Newcastle. It is a long way from what we knew 35 years ago.

The Irish links with the two clubs will always remain strong as it will be reflected in the connection to the two cities. ‘The first thing I heard when I came to Liverpool is that a Scouser is an Irish man or woman who can swim,’ Jurgen Klopp remarked during an interview to promote a tribute match for Sean Cox, the Irishman who was assaulted outside Anfield in 2018.

And that history will always be there. It can be seen in the arts, in the Irish ancestry of bands such as The Beatles or The Smiths or in comedians such as John Bishop and Steve Coogan.

That connection to Ireland once could be seen on the football field when these two famous clubs collided. But that was in a different time. What once had the feel of an Irish derby in England is now the globe’s local derby.

For the thousands of supporters in Ireland, Caoimhín Kelleher is the only link.

It is a far cry from the time when John Aldridge’s goals were helping Liverpool to titles or Roy Keane was driving United to standards that they have yet to reach again.

Given the long-standing connection that these clubs have with this island, perhaps it is time to ask ourselves what the weakened link on the playing field means for Irish football.