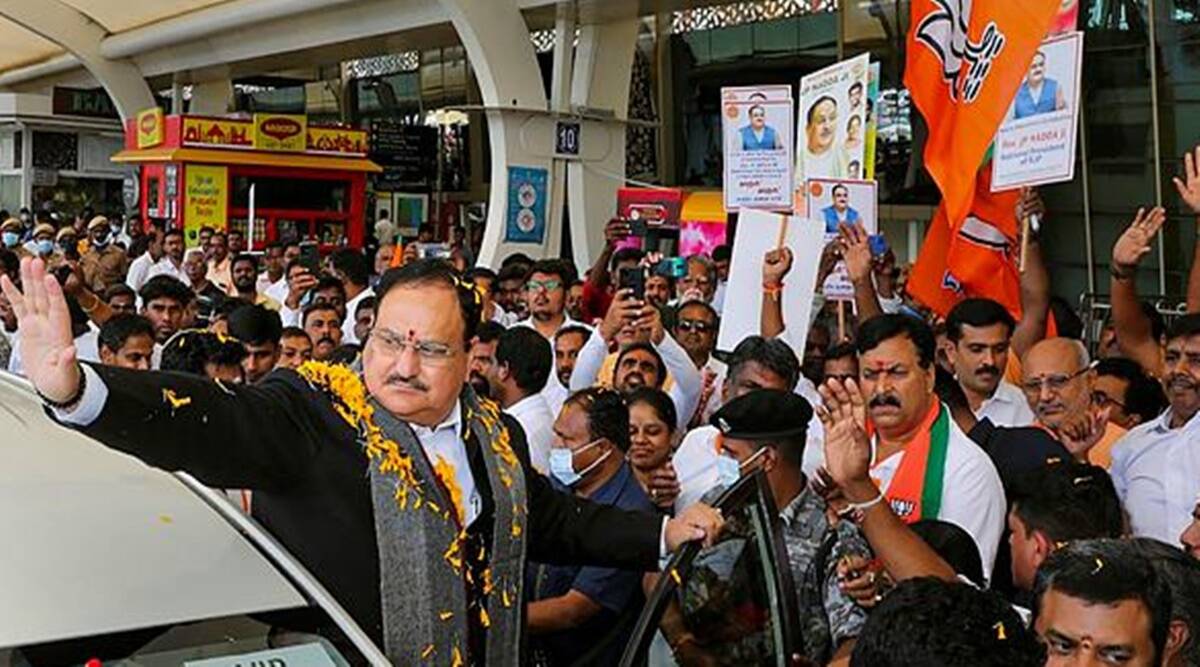 BJP national chief J P Nadda on Tuesday accused the ruling DMK of furthering the interests of one family alone and claimed Tamil Nadu is not in safe hands in so much as the nation is under Prime Minister Narendra Modi’s leadership.

The DMK is hardly concerned about the well-being of the nation as it was keen that only one family prospers, he said and fervently appealed to the people to “change hands” so that the state also prospered.

Apparently indicating that the DMK should be dislodged from power and that the BJP given an opportunity to administer the state, Nadda said “the nation is in safe hands but Tamil Nadu is not in safe hands. So, you better change hands.” Addressing a massive rally at Mettupalayam near here, the BJP chief eyeing the 2024 Lok Sabha elections, said “when I talk about regional parties, it is the family party – dynastic party here. The DMK is not a regional party, it’s a family party. D stands for Dynasty, M stands for Money swindling, K stands for Katta panchayat.” “They would loot, take out as much as they can. They are not here to serve you. But we are here to serve you. They are here to ruin you. We are here to take care of the people. They take care of their family. For us, nation first, party next and self last but for them self first, party secondary and nation last and finally lost,” the BJP president said going hammer and tongs at the DMK.

He claimed that while the DMK divided the people, the BJP united them.

“I request you all to see to it that the state be ensured with ‘Sabka Saath, Sabka Vikas, Sabka Vishwas, Sabka Prayas’. Ensure bringing some infrastructural changes along with the overall development of the state through BJP,” he said.

Infrastructure development, right from defence to roads, from education to the medical sector has been done in the country, he added.

Training his guns on the Congress, the BJP president sought to know what the Congress had done to the country in the last 70 years. After the BJP came to power, the poor in the country and also the women were empowered. “The Modi government has truly changed the lives of people,” he said.

India is going forward and is taking a big leap under the powerful leadership of the Prime Minister. “We can say with confidence that India is now in the safe hands. India, in this ‘Amrit Kaal’, has been forging ahead with strength and she will soon become the greatest leader of the world. Be it the Lok Sabha elections, or the upcoming Vidhan Sabha elections, I’m damn sure you’ll turn the tables this time. I’m totally confident about this,” Nadda said.

Lauding Modi’s efforts in managing the COVID-19 crisis, he said the Prime Minister ensured a suraksha kavach to the people of the nation through double vaccine and booster dose while countries such as China, the US and Europe were still battling the pandemic.

Earlier, on his arrival in Coimbatore, he was received by state president K Annamalai and other leaders.

Nadda later took part in a ‘media and social media influencers meet.’ Speaking to reporters earlier in Ukkadam, Annamalai said “Nadda’s visit to the state would result in an uprising” and would help the Tamil Nadu unit of the party grow stronger.

Security was beefed up in the city in view of the BJP national president’s visit.