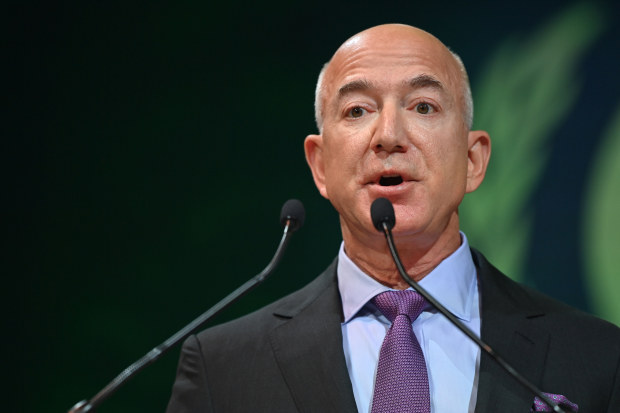 How to lose $644b: Musk tops the list of tech’s biggest losers

The broader markets also nosedived this year as investors and companies grappled with war overseas, rising inflation and interest rates and increasingly budget-strapped consumers. Billionaires who made their fortunes in non-tech industries also shaved fortunes from their net worth.

But some of the most significant drops have hit tech moguls. See how much several tech leaders lost this year:

Elon Musk lost $US132 billion in net worth this year, a loss that exceeds the fortunes of each of the other wealthy men on this list.

The CEO of Tesla, SpaceX and Twitter was the richest person in the world for much of this year. But Musk, who holds much of his wealth in Tesla shares, lost that crown as Tesla stock spiralled downward, plunging nearly 70 per cent throughout the year.

Tesla stock has felt the brunt of concern that demand for electric vehicles is weakening in China, a major market for the company. Tesla also faced challenges tied to the rising cost of supplies to make the vehicles.

Some investors have also been wary about Musk’s focus on Twitter. He sold Tesla shares to help fund his $US44 billion takeover of the social media company, and his short reign at the helm of Twitter has been marked by upheaval. The turmoil has made some Tesla investors uneasy, and they’ve urged Musk to once again focus on the car company.

Jeff Bezos lost $US84.1 billion this year as tech stocks tumbled from their stratospheric heights and Amazon shares plunged nearly 50 per cent, marking one of its worst years ever on the market.

The founder and chairman of Amazon stepped down from his role as CEO last year, but he remains its largest shareholder.

Amazon grappled with high inflation and slowing growth, as the huge bump in sales it experienced during the coronavirus pandemic waned this year. The company has not been immune to layoffs hitting the tech industry, and it is in the process of cutting about 10,000 people from its corporate divisions.

Bezos is also the founder of space travel company Blue Origin and owns The Washington Post newspaper, which he bought for $US250 million in 2013.

Mark Zuckerberg’s net worth plunged nearly $US81 billion this year. The Facebook founder slid from the sixth-richest person at the end of last year to No. 25, according to the Bloomberg Billionaires Index.

It’s been a trying year for Facebook, which announced it was changing the name of its parent company to Meta last year. Zuckerberg, who still leads the company he founded as a college student, has orchestrated the company’s shift to focus more on the metaverse, a take on an interconnected digital world.

Meta reported its first two quarterly revenue drops this year as the company faces increased competition from TikTok and other, smaller social media apps, and a tougher digital advertising environment. The company warned it planned to lose even more next year as it builds out the metaverse. Meta announced it planned to lay off 11,000 workers this fall as it sought to cut expenses.

Sergey Brin and Larry Page lost a collective $US88 billion this year. The founders of Google and current board members of parent company Alphabet stepped away from their executive roles in 2019, but they still hold major sway over the business through a special class of voting shares. Page had served as chief executive while Brin was president of Alphabet.

In a punishing year for digital advertising, even industry giants such as Alphabet have not been spared. Alphabet has slowed its hiring and has closed its cloud streaming service for video games, Stadia.

Earlier this year, Brin filed for a divorce from his wife, although the ultimate financial breakdown of the split will likely remain out of public view, after the couple took steps to shield details of the break-up.

The entrepreneur, philanthropist and co-founder of Microsoft lost nearly $US29 billion in 2022. Gates’ roughly 20 per cent fall nearly matches the decline of the S&P 500 this year, meaning the billionaire’s losses have largely tracked with a broad barometer for the overall market and a gauge of the economy. In fact, he beat out the Nasdaq composite index.

Gates’ investments are diversified, with large stakes in multiple companies, opulent real estate and huge swaths of farmland. But his most valuable single holding remains shares of Microsoft, which shrank by nearly 30 per cent this year.

While revenue for Microsoft’s cloud services increased by 24 per cent during the company’s most recent quarter, sales for its Windows operating system fell by 15 per cent. And Microsoft said it expects slowing growth for its cloud revenue next year, which sent Wall Street into selling mode.

The immensity and complexity of Gates’ vast wealth played a notable role in the widespread interest in his divorce from Melinda French Gates last year.

The former chief executive of Microsoft and owner of the Los Angeles Clippers lost more than $US20 billion this year as the tech giant’s slide ate into his net worth.

Most of Ballmer’s wealth is tied up in shares of Microsoft, where he served as CEO from 2000 to 2014. While the company has fared better than other tech titans that rely more on advertising and consumer spending, the Windows maker still shed more than a quarter of its value this year.

In addition to forecasting slower cloud growth, Microsoft has warned investors that it expects weak PC sales to extend into next year, and advertisers pulling back on spending will diminish revenue for LinkedIn and search ads.

After retiring from Microsoft in 2014, he purchased the Clippers for $US2 billion. He’s shelling out even more money to build the league’s premier arena, the Intuit Dome, outfitted with an abundance of toilets to reduce bathroom wait times during games.

Calculations of loss value and net worth were sourced from the Bloomberg Billionaires Index as of December 24.