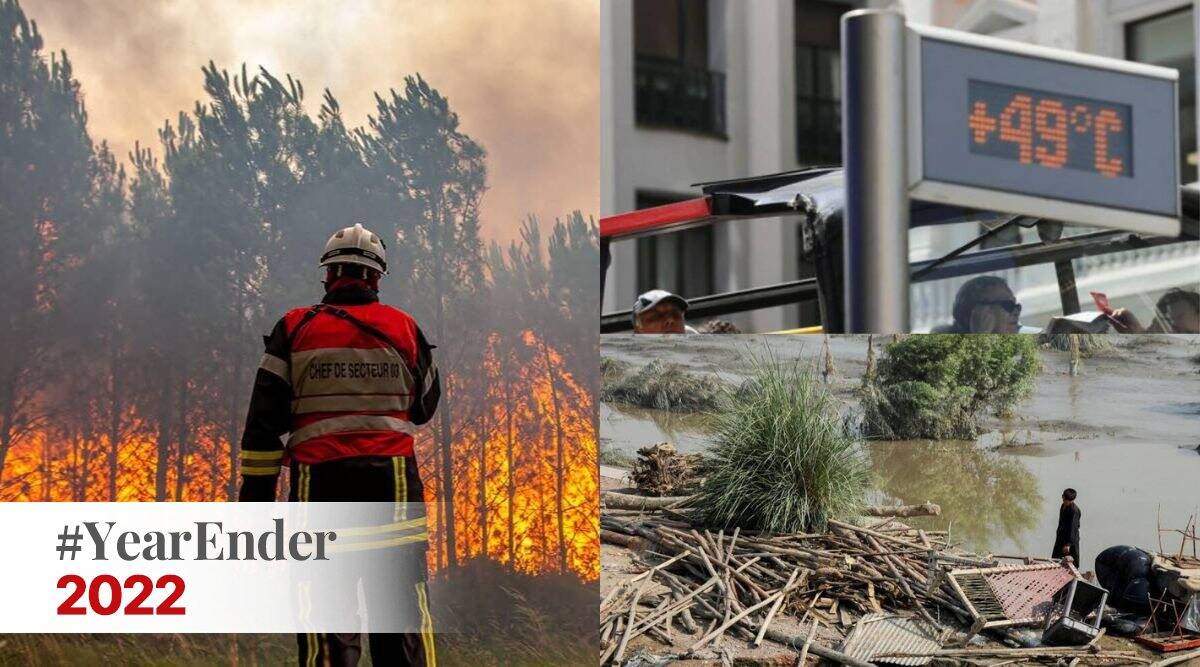 The devastating flood in Pakistan, heatwave and drought in Europe, and above average wildfires in the US put the focus back on climate change in 2022. As the year draws to a close, we take a look at the important events in 2022.

Pakistan witnessed one of the worst floods in its recent history this year. Reports said that about 110 of the 150 districts in the country were affected by the flooding, which started in July but continued to worsen over the next month. The flood was a direct result of an extremely wet monsoon season this year, with more than the usual spells of rain witnessed in the country.

“Pakistan has never seen an unbroken cycle of monsoon like this. Eight weeks of non-stop torrents have left huge swathes of the country under water. This is no normal season. This is a deluge from all sides, impacting 33 million plus people which is the size of a small country,” Pakistan’s Minister for Climate Change Sherry Rehman said on Twitter.

According to Pakistan’s National Disaster Management Authority (NDMA), the floods affected nearly 15% of the country’s population (around 33 million people), making it a more widespread disaster than the 2010 ‘superflood’ in which about 20 million people were affected. Pakistani media reported that more than half of the country was under water this year, with millions rendered homeless.

Heatwave and drought in Europe

This is representative of the larger trend of temperatures across the world rising due to climate change. Considering the average annual temperature, the last eight years have been the hottest ever recorded through direct measurements since the 1880s, a NASA analysis had shown, with 2021 being the sixth hottest year ever recorded.

Along with the heatwave, Europe also experienced a severe drought, billed as the worst one in 500 years.

In August, the Indian government said the country would reduce its emission intensity by at least 45 per cent, instead of the earlier commitment of 33 to 35 per cent, from 2005 levels by 2030. Another enhancement was that at least 50 per cent of India’s total electricity generation would come from renewable sources by 2030, an upgrade from the earlier 40 per cent.

These came months after Prime Minister Narendra Modi made a few headline-grabbing promises at the climate change conference in Glasgow in 2021. The NDC is a part of the 2015 Paris Agreement, that requires every country to set self-determined climate targets which are supposed to be progressively updated with more ambitious goals every few years. India’s first NDC was submitted in 2015, just before the Agreement was finalised.

Released at the COP27, the Climate Change Performance Index  put India at the eighth position (two ranks above its previous place) on a list of 59 countries and the European Union.

India was ahead of most developed countries on the list: the UK was ranked 11, Germany 16, while China and the United States were placed at 51st and 52nd ranks respectively. Meanwhile, Denmark and Sweden were assessed to be the top performers this year as well.

“India earns a high rating in the GHG Emissions and Energy Use categories, with a medium for Climate Policy and Renewable Energy. The country is on track to meet its 2030 emissions targets (compatible with a well-below 2 degree Celsius scenario). However, the renewable energy pathway is not on track for the 2030 target,” a statement accompanying the index said.

Russia-Ukraine war and its effects on renewable energy

Retaliating against sanctions imposed upon Russia by Western countries, President Vladimir Putin reduced gas supply to Europe by nearly 90 per cent. Russia supplied forty per cent of Europe’s gas, and imports had continued even after the sanctions— these were due to the invasion of Ukraine in February this year and the subsequent Russia-Ukraine war. This led to energy shortages across Europe, which impacted inflation in the countries as well.

This year, the COP27, held at Sharm el-Sheikh in Egypt, became a major milestone in the global response to climate change, due to the decision of setting up a loss and damage fund, which was a key demand of developing countries. The “loss and damage” refers to costs the rich and developed countries, who are majorly responsible for industrial emissions that pollute the environment, should pay to poorer nations that have made negligible contribution to pollution but are more vulnerable to extreme climate events (for example, the Pakistan floods).

However, this was the only bright spot in an otherwise underwhelming conference. COP27 was built up as the ‘implementation COP’ or the meeting that would accelerate the actions being taken on climate change; this expectation would unfortunately not translate into reality.

India, for its part, sought a phase-down of all fuels and not just coal (at various points, India has asserted that it will not phase down coals due to its energy needs). It also called out the duplicity of developed countries, arguing that the selective labelling of some energy sources as ‘green’ had no basis in science.

One of the most bizarre things to happen in the fight against climate change this year was the defacement of iconic paintings by a climate activist group calling for a halt to all new oil and gas consents and licences.

The activist group shot into public view on October 14 when two activists threw tomato soup at Vincent van Gogh’s Sunflowers in the National Gallery in London. Eventually, the group and its way of protesting went beyond London. A few weeks later, German police arrested two people for throwing mashed potatoes at a Claude Monet painting in Germany’s Barberini Museum museum. In late October, a video surfaced on social media of two men standing close to Johannes Vermeer’s Girl with a Pearl Earring, housed in the Mauritshuis museum in The Hague. One man is seen trying to superglue his bald head to the painting while another empties a can of tomato soup over the first man’s head.

These protests triggered global debates on not just climate change, but also activism and civil disobedience in modern society.

Above-average wildfire season in US

The United States saw 64,835 wildfires in 2022, the most since 2017. According to USA Today, together this amounted to the burning of more than 7.4 million acres, which is higher than the 10-year average (in both number of fires as well as acres burned).

According to scientists, climate change is continuously worsening wildfires, both in terms of intensity and impact. They expect conditions to further worsen in the coming years, as a result of various factors: global warming, droughts, storms, forests destroyed by hurricanes, urbanisation and conflicts over how to manage land to prevent extreme fires.