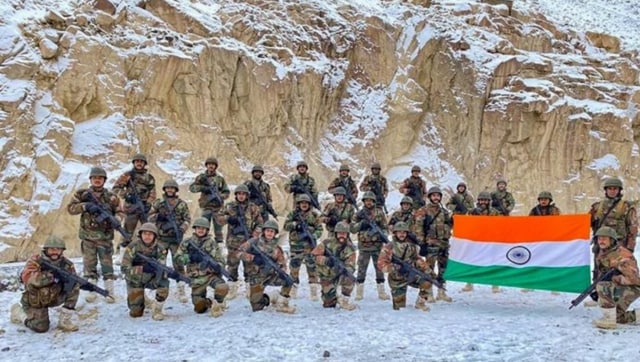 New Delhi: India embarked on a major overdrive in 2022 to significantly bolster its overall military prowess and focused on its strategic goals in South Asia as a fresh attempt of transgression in the Tawang sector by the Chinese troops amid the unresolved eastern Ladakh border standoff renewed the focus on the looming threat from China along the frontier.

The Indian troops guarding the nearly 3,500-km Line of Actual Control (LAC) maintained an assertive approach in sync with the broader national security doctrine and procured a variety of military platforms and weapons to enhance their combat capabilities.

In line with a decision taken at the 16th round of military talks, the two sides carried out disengagement from Patrolling Point 15 in the Gogra-Hotsprings area of eastern Ladakh in September, taking forward similar exercises in other friction points last year.

But the face-off between the two of the planet’s biggest military forces lingered on in Demchok and Depsang regions though the Indian side pressed for completion of the disengagement in remaining friction points at the earliest.

As the fresh clash in the Yangtse area of Arunachal Pradesh’s Tawang sector on December 9 renewed the focus on China’s evil designs, Defence Minister Rajnath Singh said in Parliament that the Chinese troops tried to “unilaterally” change the status quo but the Indian Army compelled them to retreat.

In the course of the year, India expanded military cooperation with almost all friendly countries in South Asia in the face of China’s consistent attempts to increase its influence in the region.

In October, India tested a ballistic missile fired from its first indigenous nuclear-powered submarine, INS Arihant which was seen as a major milestone to further boost the country’s strategic strike capabilities.

India has become only the sixth country, alongside the US, Russia, the UK, China and France, to have nuclear-powered submarines armed with ballistic missiles.

In December, India successfully test-fired nuclear-capable ballistic missile Agni-5 which can strike targets at ranges up to 5,000 km. The Agni-5 project is aimed at boosting India’s nuclear deterrence against China which is known to have missiles like Dongfeng-41 having ranges between 12,000-15,000 km.

Agni-V can bring almost the entire Asia including the northernmost part of China as well as some regions in Europe under its striking range. In the course of the year, India also carried out a test firing of the extended-range version of the Brahmos missile, the Prithvi-II missile, Agni-4, Agni-3 and Helina missiles.

The Indian Army has also been focusing on enhancing infrastructure along the LAC. rom construction of roads, bridges and ammunition depots to bolstering its surveillance apparatus, the Army is ramping up military infrastructure at a rapid pace for quicker mobilisation of troops.

The Navy said the aircraft carrier will be able to play a role in ensuring peace and stability in the Indo-Pacific region.

The year 2022 saw the Indian Army continuing its anti-militancy operations in Jammu and Kashmir besides keeping a strong vigil over the Line of Control.

At the same time, only three minor incidents of “violations” were recorded along the (LoC) in Jammu and Kashmir after Indian and Pakistani armies agreed to observe a ceasefire in February last year, according to the defence ministry.

In a year-end report, it also said that Pakistan continued to retain the “proxy war infrastructure” and “functionality” of terrorist training camps.

In March, Pakistan lodged a strong protest with India following an incident of an accidental firing of a Brahmos missile that landed in that country.

Following a high-level probe into the incident, three officers of the Indian Air Force were sacked for the incident as the investigation found that deviation from the Standard Operating Procedures (SOP) by them led to the accidental firing of the missile.

In the year, the defence ministry also rolled out the ‘Agnipath’ recruitment scheme with an aim to bring down the age profile of the armed forces and make them more agile.

The scheme, announced on 14 June, seeks to recruit youths between the age bracket of 17-and-half years and 21 for only four years with a provision to retain 25 per cent of them for 15 more years. For 2022, the upper age limit has been extended to 23 years.

Several parts of India witnessed violent protests against the scheme with the agitators demanding its roll back as the new model does not provide a job guarantee to 75 per cent of recruits. However, the protests fizzled out within a few days.

In September, Gen Anil Chauhan became India’s new Chief of Defence Staff with a mandate to implement the ambitious theaterisation plan that aims to ensure tri-services synergy and prepare the armed forces for future security challenges facing the nation.

According to the theaterisation plan, each of the theatre commands will have units of the Army, the Navy and the Air Force and all of them will work as a single entity looking after security challenges in a specified geographical territory under an operational commander.

In a boost to India’s focus on defence indigenisation, Prime Minister Narendra Modi laid the foundation stone in Vadodara for the production of European C-295 military transport aircraft on 30 October.

The Tata Group will manufacture 40 C-295 medium transport aircraft at the facility in cooperation with global aerospace major Airbus under the provisions of a Rs 21,935 crore deal that the two firms inked last year to supply the planes to the Indian Air Force.

The contract with the government is for supplying 56 aircraft and Airbus will deliver the first 16 planes in ‘fly-away’ condition from its final assembly line in Spain between September 2023 and August 2025.

In the same month, the Indian Air Force (IAF) inducted the first fleet of indigenously-built Light Combat Helicopter (LCH), ‘Prachand’, 23 years after the need for such a lethal platform for mountain warfare was felt following the Kargil conflict with Pakistan.

Developed by state-run aerospace major Hindustan Aeronautics Ltd (HAL), the 5.8-tonne twin-engine chopper is armed with air-to-air missiles, 20 mm turret guns and rocket systems, and it is capable of destroying enemy tanks, bunkers, drones and other assets in high-altitude regions.

In 2022, the defence ministry also unveiled a slew of reform initiatives to make India a hub of manufacturing defence equipment and platforms.

It also approved the procurement of a number of military platforms and weapons including light tanks, anti-ship missiles and long-range guided bombs at a cost of Rs 84,328 crore to boost the combat capabilities of the armed forces. The year also saw India ramping up overall defence cooperation with a number of leading countries including the US, France, the UK, Germany and Japan.