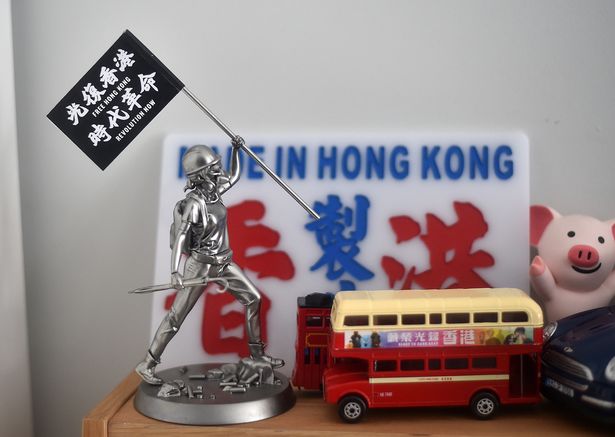 Chung and Man matter-of-factly describe how they left behind a millionaire lifestyle when they fled Hong Kong in March, as violent protests against China’s increasing attacks on civil liberties reached fever pitch.

Like so many others, they lived in a small three-bed apartment on Hong Kong island with their young son. Chung, 43, was a marketing exec for a large charity, while Man, 40, was an HR exec for a major bank. They employed a nanny and a cook and, materially, wanted for nothing. They enjoyed trips to Japan and ate out every week at the best restaurants.

But all around them the fabric of society, and the freedoms they had enjoyed, were slowly being eroded on the former colony Britain handed back to China in 1997 after 150 years of control.

In 2020, China imposed a new national security law for Hong Kong which led to wide-spread protests and a tough crackdown. The new law effectively handed more power to Beijing. It criminalised ‘subversion’ and ‘collusion’ with foreign forces, for instance talking to western journalists.

The turmoil, and the fear of speaking out against the regime, prompted many to up sticks and seek a new life here. Often cash-rich, career-minded and well-educated, Hong Kongers have made a bee-line for the north west, settling in large numbers particularly in places like Trafford, attracted by its high-performing schools, and Stockport.

On January 31, 2021, the UK introduced a new immigration route for Hongkongers with British National Overseas (BNO) status, and by the end of June this year 140,500 had applied. Visas were granted to 133,124 people, according to the latest government statistics.

Trafford Council estimates that 800 of them have made the leafy borough, home to some of the best schools in the country, their new home. The Home Office estimates 300,000 HK migrants may make the journey to the UK by 2026, although the Local Government Association suspects that with 70 per cent of Hong Kong’s population of 7.4m eligible to apply, that figure may be a massive under-estimate.

They’re not coming to claim benefits. The mean age of Hongkongers arriving here is 27 and 71 per cent hold a university degree. The Home Office estimates a net benefit to government finances of between £2.4 and £2.9 billion thanks to the addition of a band of highly-skilled and cash-rich new arrivals.

Like many other Hongkongers, Chung and Man have used an agency to help them find their new home. They raised £1.5m by selling two properties in Hong Kong. Other arrivals have found that selling up relatively small apartments in Hong Kong, where property is much more expensive, has given them enough money to buy a house and a rental property.

When I visit the couple at their three-bed semi in Cheadle Hulme, they ask that I only report their first names. They agree to pictures but only in silhouette. They are scared, not for themselves but for what might happen to their families back home – where the situation remains fraught – if they speak out.

The couple regularly joined street protests against the new regime, gatherings which often turned ugly when the Hong Kong police aimed water cannon and tear gas at those who took part in what the authorities regarded as illegal.

Chung has reason to be particularly afraid. While his wife’s parents have also come to Stockport, his parents, who were born in China and lived through the cultural revolution, remain in Hong Kong. They know the power of Beijing.

“It used to be one of the most free societies in the world,” he said. “It was a golden time. But the turning point was in 2019 when they decided to crack down on everything, step by step.”

Man added: “We were scared. We didn’t know if the police would be coming to my home and arresting my husband for something he had said on Facebook. He was very outspoken.”

The last straw was the closure of the pro-democracy newspaper Apple Daily in June 2021, after it was raided by police. Executives were thrown in jail and Hong Kong lost one of its most powerful voices. Other titles followed. The closures had a chilling effect on free speech in the former British colony.

“That was a big moment,” said Chung, who talks movingly about the students who have disappeared or killed themselves at the rising oppression coming from Beijing.

Almost every week for a year, he attended street protests. He described fleeing when the water cannon turned up. Anybody found with the blue dye on them – fired from those water cannon – could expect arrest and incarceration.

The couple decided they had to flee with their son, now aged two. They considered Australia, America and Singapore but decided on the UK. Man’s cousin also lives in Stockport. She still works for the same bank while Chung is a house-husband.

Asked how they are finding life here, with public services in post-pandemic turmoil, beset by austerity and strikes, Chung answers: “I don’t see much of a problem. The freedom here is priceless.”

The lack of oppression, for instance not being forced to wear masks everywhere, was ‘refreshing’, said Man. The couple said education was also key. Schools in Hong Kong were ‘brainwashing’ children and ‘erasing’ the history of Hong Kong.

“The UK isn’t a perfect society. But what is important for us? For us what is important is having freedom here and in general people are very nice here and friendly. They are very welcoming,” said Man. “The sense of community is great here,” said Chung.

But what about those who might resent their presence? Man said: “I think it’s fairly common for people to worry about new immigration who are taking these resources. If I was in their shoes, I would worry about it. But will that immigration contribute to society? Are they giving more than they are taking? Most people who came here sold everything to come here. That’s our situation. The second thing is, it’s not like we are here to take government welfare. As far as I know, everybody who came here got a job. I know a dentist who came here who works part-time in a factory. They like it. They have more time with their children.”

Asked what she misses about life back in Hong Kong, she immediately says ‘the food’, laughing as she adds: “No offence but it’s not as diverse here in Manchester and it tastes quite bland.”

She says waiting for a GP appointment is frustrating. “If you need a doctor’s appointment here, you need to take half a day off,” she said. Most people in Hong Kong had private medical insurance and those who needed help just had to walk into a clinic without any appointment.

“But you feel more free here. It’s just the air,” she said.

Mathew Tse, who runs a Warrington-based company HK 2 UK, which assists people to purchase or rent property here, said this year alone he had helped 600 families come to the UK. Asked why Trafford was a particularly popular destination, he said: “It’s the schools. It’s not the education, it’s the education freedom. People are looking at their kids and they want them to have the same freedom they did.”

Many HK immigrants, he said, bought one home to live in and then others to rent out.

“We had one where the wife did not really work and the husband had a basic salary. He lived in a flat he owned. He sold that for £600,000. He ended up buying a house for him to live in and another two as rental properties,” said Mathew.

He said a housing market crash in Hong Kong has slowed the numbers coming here, but he added: “There are still people waiting to come here.”

Chun Yin Mak, known as Alex, is among many Hong Kongers who have settled in Sale. He set up a community group for expats, Trafford Hongkongers, with his friends.

He said: “They have moved thousands of miles away from family and it can be quite difficult to begin with. But the council here is very helpful and local people are very friendly – so that has made it easier. Hong Kong and Trafford are very different indeed. Hong Kong can be very suffocating and is very crowded. Trafford is far less populated and there are so many advantages to being here. There are many green areas in Trafford and we can see the sky and the birds here unlike in Hong Kong and other large cities like London.

“We also decided on Trafford because of the schools, the job opportunities and the fantastic transport system. The borough is very accessible and there are plenty of opportunities here. I feel like it will be a great place to bring my child up.”

Jeffrey Koo, 43, who runs a Hong Kong-style bakery A Little Sweet on School Road in Sale, said: “Sale is a great place to live and work.”

Luci Cheung, 29, who runs the Asgard Groceries in Altrincham, arrived in the UK in February last year. He lives in Sale. He said: “I came over to Trafford with my girlfriend and her parents. My parents are still in Hong Kong. The community where we live and work is really nice and we find it very easy to get around thanks to the Metro.”

Father-of-two Will Yu, Martin Cheung and Eagco Leung run the CLS Hair Studio on Washway Road in Sale. Mr Yu, 40, said: “Local people have been very supportive and customers seem very happy. The lifestyle in Trafford is better than in Hong Kong where it is just so fast all the time.”