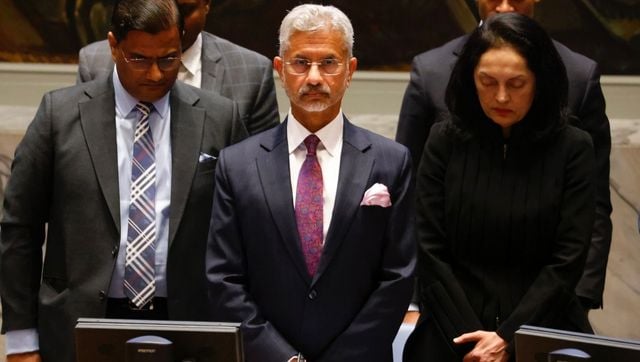 A New York Times report titled ‘Russia’s War Could Make It India’s World’ said that the “invasion of Ukraine, compounding the effects of the pandemic, has contributed to the ascent of a giant that defies easy alignment. It could be the decisive force in a changing global system.”

The report quoted Jaishankar as saying that a “world order which is still very, very deeply Western” is being hurried out of existence by the impact of the war in Ukraine, to be replaced by a world of “multi-alignment” where countries will choose their own “particular policies and preferences and interests.”

“I would still like to see a more rules-based world. But when people start pressing you in the name of a rules-based order to give up, to compromise on what are very deep interests, at that stage I’m afraid it’s important to contest that and, if necessary, to call it out,” the NYT article quoted Jaishankar as saying.

The NYT report said that could India, with its ties to Russia, mediate a cease-fire in Ukraine or even a peace settlement. Noting that Jaishankar was sceptical on this, it quoted him as saying, “The parties involved have to reach a certain situation and a certain mindset.”

On when will the war end, Jaishankar said in the report “I wouldn’t even hazard an opinion.” The report noted that it still, India wants to be a “bridge power” in the world birthed by the pandemic and by the war in Ukraine.

“It believes that the interconnectedness of today’s world outweighs the pull of fragmentation and makes a nonsense of talk of a renewed Cold War. If a period of disorder seems inevitable as Western power declines, it will most likely be tempered by economic interdependence, the Indian argument goes,” the NYT report said.

“With inequality worsening, food security worsening, energy security worsening, and climate change accelerating, more countries are asking what answers the post-1945 Western-dominated order can provide. India, it seems, believes it can be a broker, bridging East-West and North-South divisions,” the report said.

“I would argue that generally in the history of India, India has had a much more peaceful, productive relationship with the world than, for example, Europe has had,” Jaishankar said.

“Europe has been very expansionist, which is why we had the period of imperialism and colonialism. But in India, despite being subjected to colonialism for two centuries, there’s no animus against the world, no anger. It is a very open society.”

The NYT report said that Prime Minister Narendra Modi’s India is pursuing its own interests with a new assertiveness, “throwing off any sense of inferiority and rejecting unalloyed alignment with the West. But which India will strut the 21st-century global stage, and how will its influence be felt?” The report added that India is at a crossroads, “poised between the vibrant plurality of its democracy since independence in 1947 and a turn toward illiberalism” under Modi, and said Modi’s India seems to brim with confidence.

“The Ukraine war, compounding the effects of the COVID-19 pandemic, has fueled the country’s ascent. Together they have pushed corporations to make global supply chains less risky by diversifying toward an open India and away from China’s surveillance state. They have accentuated global economic turbulence from which India is relatively insulated by its huge domestic market,” the NYT report said.

“India is in a delicate position. In the face of American criticism, the country chose to take part this year in Russian military exercises that included units from China,” the report said adding that India is also part of the Quad – the United States, Japan and Australia grouping.

“This is Indian multi-alignment at work. The Ukraine war has only reinforced New Delhi’s commitment to this course. Washington has worked hard over many years to make India Asia’s democratic counterbalance to President Xi Jinping’s authoritarian China. But the world, as seen from India, is too complex for such binary options.

“If the Biden administration has been unhappy with India’s business-as-usual approach to Mr. Putin since Russia’s invasion of Ukraine, it has also been accepting of it — American realpolitik, as China rises, demands that Mr. Modi not be alienated,” the report said.