Investigation, division, gridlock: What’s in store for US Congress in 2023?

A new batch of US lawmakers will be seated in Congress on Tuesday. AFP

Washington: After two years of one-party control, a fresh intake of US lawmakers will be seated Tuesday in a Congress divided between a Democrat-led Senate and a House of Representatives with Republicans behind the wheel.

Despite its razor-thin majorities, the 2021-23 Democratic-controlled Congress was one of the most productive in modern history, writing all manner of legislation — much of it bipartisan — on manufacturing, infrastructure, gun control, the climate crisis and more.

But Washington watchers fear the age of cross-party cooperation may be coming to an end, with the legislative process about to enter gridlock and Republicans promising an aggressive agenda of investigations into most aspects of President Joe Biden’s administration.

Here are some of the stories expected to emerge from the new session of Congress.

The party of former President Donald Trump has watched powerlessly from the sidelines over the last two years as its leader fended off multiple criminal, civil and congressional probes.

But the Republicans are plotting revenge with an intense program of their own investigations.

One major target is likely to be Biden himself, and some Republicans have already confirmed that colleagues are mulling impeachment.

The House Oversight Committee’s top stated priority, though, will be intensifying scrutiny of the Democratic leader’s son, Hunter Biden, who is already being investigated by the FBI over his business practices.

Several House Republicans and figures from the last administration — including House leader Kevin McCarthy and Trump — defied subpoenas to appear before Democratic-led probes, including the investigation into the 2021 insurrection.

But Republicans have pledged nevertheless to compel testimony on multiple aspects of decision-making by the Democrats, from the White House’s management of immigration and the COVID crisis to its handling of the fraught withdrawal from Afghanistan.

McCarthy — who is fighting a rebellion against his ambitions to become the next speaker — has accused Democrats of the “weaponised politicisation” of the Justice Department over the various probes into Trump. 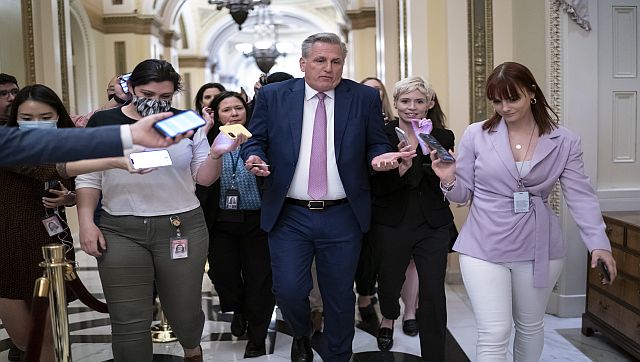 House Republican Leader Kevin McCarthy rushes to his office at the Capitol in Washington. AP

Republicans will also try to find wrongdoing in special counsel Robert Mueller’s investigation into the Russian attack on the 2016 US election, which revealed extensive contacts between the Trump campaign and Russian government and intelligence operatives.

Given the limitations of divided government, however, no strategists are holding their breath for major legislation to make its way to Biden’s desk.

The Republicans released a “Commitment to America” legislative agenda in September, but it was short on detail, offering broad political aims rather than specific policy.

On the economy, the Republicans pledged to “fight inflation and lower the cost of living,” “make America energy independent and reduce gas prices,” “strengthen the supply chain” and “end dependence on China.”

Democrats are nine short of the 60-vote “supermajority” in the Senate needed to pass most legislation, so the upper chamber is likely to spend much of its time blocking bills coming up from the House.

It will also continue to focus on approving Biden’s judicial nominees.

Since Russia invaded Ukraine in February 2022, Congress has approved more than $100 billion in military and humanitarian aid for the US ally, mainly with cross-party support.

But Republican control of the House strengthens the hand of foreign policy isolationists, fiscal hawks and others who want to stem the eastward flow of taxpayer dollars.

The party’s right flank was boosted by McCarthy’s declaration before the midterm election that his party would not sign a “blank check” for Kyiv while Americans are “sitting in a recession.”

The warning was the first official signal that Ukraine could be facing a tougher fight for funding as it fends off Russia’s invasion.

If the group of Republican lawmakers opposing the aid becomes sufficiently large, McCarthy may have to offer them concessions such as greater scrutiny of the handouts.

McCarthy has already promised an audit of “defence spending and foreign aid; including but not limited to Ukraine aid.”