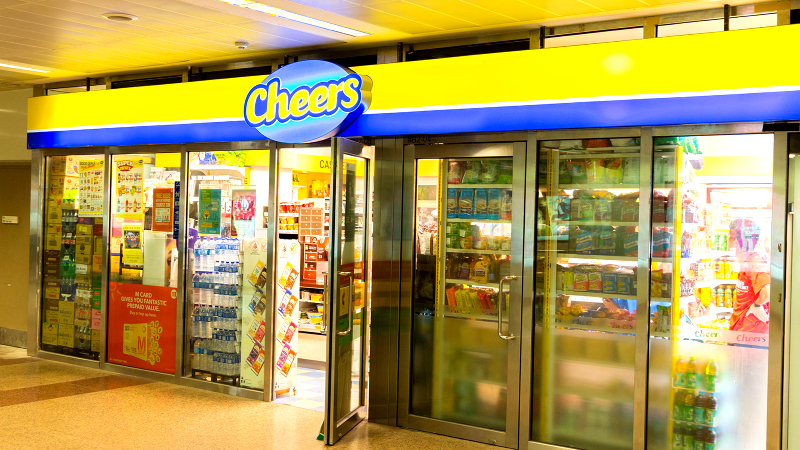 Cheers has dismissed an employee who was involved in a dispute with the police at its Lau Pa Sat outlet on New Year’s Day under the directive of FairPrice, according to an updated Facebook post this afternoon by Cheers on the situation. In its updated statement, a FairPrice spokesperson said that Cheers immediately placed the staff member involved in the incident on administrative leave and conducted an investigation after being alerted to the incident, according to media reports.

“Having spoken with the staff and assessed the incident, we have instructed our franchisee to dismiss the staff involved,” Cheers wrote in its Facebook post.“We require all staff to offer full co-operation and compliance with the authorities, and we do not tolerate acts from staff that undermine the authority of the police,” it continued.

Five videos of the incident have since been uploaded to social media platform TikTok by a user called confederateginger. In the videos, the user, who identifies as Jonathan in his profile, recorded a verbal exchange he had with three police officers in a Cheers outlet at Lau Pa Sat. In the first video, the user informed the police that a “drunk guy” had entered the store to cause trouble. He added that the man used vulgarities and that he also tried to impersonate a police officer.

When officers tried to get Jonathan to show them his identification card, he refused and demanded to know why he was required to show identification. In a separate vide, the TikTok user can be heard talking to one of the police officers about a “loss of income” due to the closure of the Cheers outlet. The officer assured him that the store was not closed. The police confirmed on Tuesday though that its preliminary investigations revealed that comments about race and nationality as well as verbal threats were allegedly exchanged prior to their arrival.

Cheers also issued an apology in its statement and wrote, “We appreciate the feedback and concern that we’ve received from the public on the matter, and we sincerely apologise for the distress caused.”

The case has since garnered significant public attention, something FairPrice and Cheers are fighting back against. Employees as a whole represent a company’s culture and values and consumer facing staff in particular have the unique ability and power to influence brand trust. According to Harvard professor Gerald Zaltman, 95% of all purchase decisions are made subconsciously. Research also shows that emotions play a huge role in the subconscious decision-making process.

“For example, many consumers report handling competing brands and comparing prices at the point of purchase. However, observations of these same consumers often reveal that they don’t even look at alternatives to the chosen brand,” said Zaltman in an interview published by Harvard Business School. Instead, experiences play a pivotal role, be it in the store front or from the employees. FairPrice’s quick action and attempt to distance itself from the incident was certainly apt in order to maintain consumer’s trust in their brand and to maintain their frame of reference when it comes to their products as some industry members affirmed.

Asiya Bakht, the founder and CEO of Beets PR said employees serve as ambassadors of the brand in the mind of customers, and in retail businesses their role is especially critical. “FairPrice seems to understand this well and has demonstrated competency in dealing with the Cheers incident. The company investigated the situation and gave the errant employee a chance to explain his behaviour before dismissing him. The company also issued two statements as per my knowledge which was reassuring from a customer perspective,” Bakht added.

Adding on, Jose Raymond, the director of strategic advisory at PRecious Communications said Cheers had to respond swiftly because it was their brand which was at the centre of the controversy considering that it happened in one of their outlets. “Considering the viral nature of the content, and the fact that the integrity of the Singapore Police Force was being called into question, it was the right thing for Cheers to respond the way they did given that any delay would have meant that there would have been potential reputational damage to Cheers,” he said.

Sharon Koh, the director of Asia PR Werkz who has had a corporate background in marketing and brand development having worked at companies such as budget airline Scoot and Procter & Gamble said the brand had to release a statement as the staff member’s actions were undertaken while he was at work.  “As an employer, it is appropriate for them to apologise for the inconveniences caused by their staff member while he was at work to the police officers involved, as well as disruptions to customers at that point in time for perhaps an unpleasant shopping experience at Cheers due to this incident. If the staff member had committed his actions outside of work, then there would be no need for Cheers to issue an open apology,” she continued.

She added that the incident could prompt Cheers to look over the training of their service staff and their protocols to better prepare their employees for handling such store incidents in a professional manner.

Saying that, the overall online conversation about FairPrice as a brand has continued to remain positive despite the news. “Of all the social conversations around Fairprice in Singapore since 1 January, this incident involving the Singapore Police Force makes up 4% of the volume of mentions of Fairprice, shared Divika Jethmal, the regional marketing manager of global media intelligence company Carma. “A closer examination of the negative sentiments was not towards FairPrice, but instead, criticised the employee,” she continued.