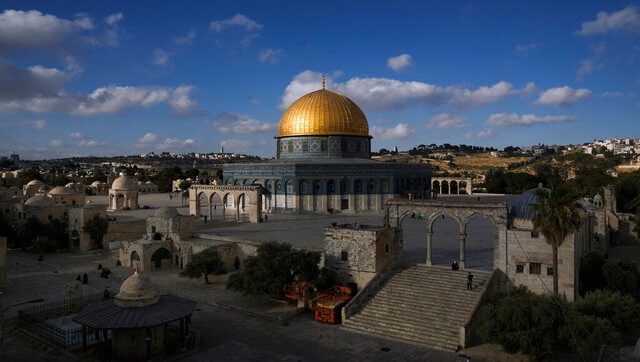 United Nations: Israeli and Palestinian envoys to the United Nations on Thursday traded heated barbs at a Security Council meeting over the controversial visit by an Israeli minister to Jerusalem’s Al-Aqsa mosque compound.

Israel’s ambassador to the UN, Gilad Erdan, called the session “pathetic” and “absurd” while the Palestinian envoy accused the Jewish state of acting “with absolute contempt.”

The 15-member Council discussed the visit, which has enraged Palestinians, at UN headquarters in New York following a request by the United Arab Emirates and China.

Ahead of the session, Israel’s permanent representative to the world body, Gilad Erdan, told reporters there was “absolutely no reason” for the meeting to be held.

“To hold a Security Council session on a non-event is truly absurd,” he said.

Al-Aqsa mosque lies in Israeli-annexed east Jerusalem and is the third-holiest site in Islam. It is the most sacred place to Jews, who refer to it as Temple Mount.

Under a longstanding status quo, non-Muslims can visit the site at specific times but are not allowed to pray there — although some Israeli nationalists are believed to do so covertly, which angers the Palestinians.

Erdan said Ben-Gvir’s visit was “in line with the status quo and whoever claims otherwise is only inflaming the situation.”

“To claim that this brief and completely legitimate visit should spark an emergency Security Council session is pathetic,” he added.

The Palestinian ambassador to the UN, Riyad Mansour, accused Israel of acting “with absolute contempt” for the Palestinians, the Council, and the entire international community.

He called on members of the Council to take action against Israel.

“What red line does Israel need to cross for the Security Council to finally say, ‘Enough is enough,’ and to act accordingly?” Mansour asked.

US diplomat Robert Wood told the meeting that America opposes “any and all unilateral actions that depart from the historic status quo, which are unacceptable.”

“We urge both Israelis and Palestinians to take the necessary steps to restore calm, prevent further loss of life and preserve the possibility of a two-state solution,” to peace in the Middle East, he said.

The UN Security Council has adopted several resolutions on the Israeli-Palestinian conflict over the years and supports the two-state solution to peace in the Middle East.

After the two-hour session wrapped up, Mansour voiced satisfaction at what he called the “unanimity (of the Council) to defend the status quo,” adding he did not expect further concrete action from the world body.