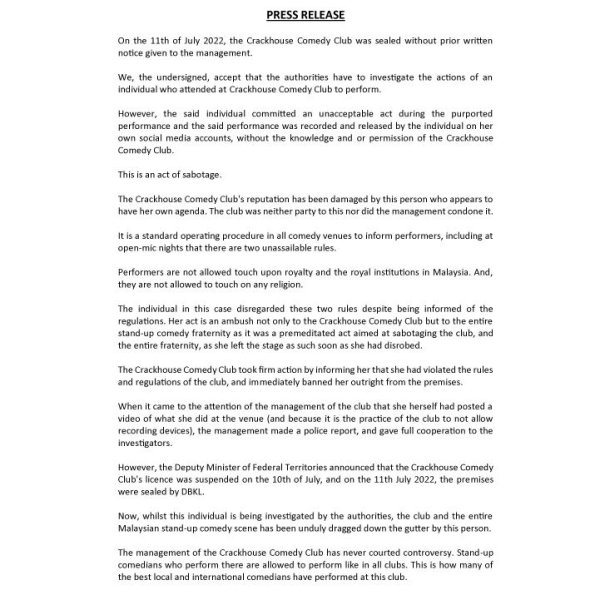 According to an article on the MalayMail, the owners wanted the court to declare the decision by to restrict them from registering any businesses indefinitely in Kuala Lumpur is in direct violation of the law, and is “unconstitutional and invalid”, and seek compensation for the damages.

The stand-up routine video which was posted online, involved jokes on Islam, drawing furore from Malaysians – many of whom are Muslim. The comedian, Siti Nuramira binti Abdullah said, “I’m a Malay Muslim and I have memorised 15 verses of the Quran,” after which she stripped off her hijab and baju kurung, to show a more revealing outfit that she had worn underneath. The routine was profanity-laden as well. Nuramira was arrested but went on to plead not guilty of insulting Islam.

When the video went viral, CCC took to their Facebook page to share that they “strongly condemn the contents of the now-viral video showing an individual allegedly insulting Islam during and open mic show on our premises.” They also put out an official release regarding the incident. The release stated, “The Crackhouse Comedy Club’s reputation has been damaged by this person who appears to have her own agenda. The club was neither party to this nor did the management condone it.”

The release also stated that performers at the club are not allowed to touch upon royalty, royal institutions of Malaysia, or any religion.

According to a previous article written by A+M, engagement for the issue far exceeded over 300,000 across multiple social media platforms including Facebook, Forums, Instagram, Twitter and TikTok when it first occued. Social listening company Truescope said that started gaining popularity on 9 July, reaching its peak on 11 July with over 100,000 engagements on Malaysian social media. While some netizens praised DBKL’s action of suspending the club, a number of netizens also opined that the premise or the organiser should not be blamed for the actions of Nuramira. At the same time, netizens also felt that action must be taken to anyone who insults other religions.

A+M has reached out to CCC’s owners for a statement.

Social Media News
Previous Post
Why India is driving a university boom
Next Post
Recode Studio’s free lunch with make-up classes wins over Shark Tank judges, but gets no money