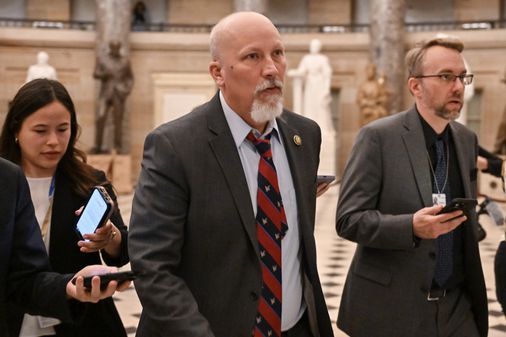 WASHINGTON — Newly empowered House Republicans are preparing a wide-ranging investigation into law enforcement and national security agencies, raising the prospect of politically charged fights with the Biden administration over access to sensitive information like highly classified intelligence and the details of continuing criminal inquiries by the Justice Department.

The House plans to vote this week on a resolution to create a special Judiciary subcommittee on what it calls the “weaponization of the federal government,” a topic that Republicans have signaled could include reviewing investigations into former President Donald Trump.

The panel would be overseen by Rep. Jim Jordan, R-Ohio, who is also poised to become the Judiciary Committee’s chair. It remains to be seen who else Speaker Kevin McCarthy, who made numerous concessions to a far-right faction of his party to win the speakership, will put on it.

In a Fox News interview Friday evening, Rep. Chip Roy of Texas, a lead negotiator for hard-right lawmakers who pushed McCarthy’s team for concessions, portrayed the panel as part of the agreement they struck for their support. He said McCarthy had committed to giving the subcommittee at least as much funding and staffing as the House special committee in the last Congress that investigated the Jan. 6, 2021, attack on the Capitol.

A spokesperson for Jordan did not reply to a request for comment, but both he and McCarthy have spoken for months about their desire for such an investigation and pledged to voters during the 2022 campaign to carry one out.

“We will hold the swamp accountable, from the withdrawal of Afghanistan, to the origins of COVID and to the weaponization of the FBI,” McCarthy said in his first remarks as speaker early Saturday. “Let me be very clear: We will use the power of the purse and the power of the subpoena to get the job done.”

The text of the resolution establishing the subcommittee would give the panel essentially open-ended jurisdiction to scrutinize any issue related to civil liberties or to examine how any agency of the federal government has collected, analyzed and used information about Americans — including “ongoing criminal investigations.”

The Justice Department has traditionally resisted making information about open criminal investigations available to Congress, suggesting that legal and political fights over subpoenas and executive privilege are most likely looming.

Republicans are promoting Jordan’s panel as a new “Church Committee,” referring to a 1970s investigation by Sen. Frank Church, D-Idaho, that uncovered decades of intelligence and civil liberties abuses by presidents of both parties.

But in an environment in which Trump has been the subject of multiple criminal investigations for years — including continuing inquiries into his attempts to overturn the 2020 election results and his hoarding of sensitive documents — Democrats predicted the new investigative subcommittee was likely to adopt a more partisan edge.

Rep. Jerrold Nadler of New York, the top Democrat on the Judiciary Committee, said the Church Committee had been “a serious and bipartisan attempt to reform the conduct of the intelligence community, based on hard and verifiable evidence.”

By contrast, he said that “this new thing, fueled by conspiracy theories and slated to be run by the most extreme members of the MAGA caucus,” was likely to be more similar to the notorious House Un-American Activities Committee of the mid-20th century.

Jordan is a staunch ally of Trump. Late last year, as the top Republican on the Judiciary Committee when his party was still in the minority, he oversaw a 1,000-page staff report that claimed that the FBI had “spied on President Trump’s campaign and ridiculed conservative Americans” and that the “rot within the FBI festers in and proceeds from Washington.”

The resolution appears to give him authority to subpoena the Justice Department for information about the special counsel inquiry into Trump’s attempts to overturn the 2020 election and his handling of classified documents, along with other politically charged matters like an open tax investigation into President Joe Biden’s son, Hunter Biden.

The text of the resolution would also grant Jordan’s panel the power to receive the same highly classified information that intelligence agencies make available to their oversight committee, the House Permanent Select Committee on Intelligence.

Intelligence Committee members have access to some of the most sensitive secrets in the government, including information about covert actions, which are not shared with other lawmakers. Traditionally, House leaders tend to place on the intelligence panel members of their party they think are especially trustworthy not to disclose classified information.

While Jordan’s investigative unit will be housed within the Judiciary Committee, its 13 members — eight of whom would be Republicans — will not be limited to lawmakers on that committee.

It is not clear, for example, whether Republican leaders would select hard-right members, such as Rep. Marjorie Taylor Greene, R-Ga., who was stripped of her committee assignments in 2021 for making a series of violent and conspiratorial social media posts before she was elected. McCarthy has already promised her a spot on the House Oversight Committee, and she broke with other far-right members to support his speakership bid from the first ballot, as did Jordan.

Such a situation could result in lawmakers trying to scrutinize a Justice Department investigation as that inquiry potentially examines some of those same lawmakers’ conduct concerning the events of Jan. 6.

In an interview on ABC’s “The Week” on Sunday, Rep. Scott Perry, R-Pa., rejected a suggestion that he should pledge not to serve on Jordan’s subcommittee because it may scrutinize the Jan. 6 investigation and as a witness in that inquiry, he had a conflict of interest. Perry, who played an important role in Trump’s attempt to overturn the results of the 2020 election, had his cellphone seized by the FBI.

“Why should I be limited — why should anybody be limited just because someone has made an accusation?” Perry said, adding: “I get accused of all kinds of things every single day, as does every member that serves in the public eye. But that doesn’t stop you from doing your job. It is our duty, and it is my duty.”

Some Republicans also seem to see the panel as an opportunity to raise culture-war issues and promote conspiracy theories. In his interview with Fox, Roy described the subcommittee’s mission as going “after the weaponization of the government, the FBI, the intel agencies, DHS, all of them that have been, you know, labeling Scott Smith a domestic terrorist.”

In fact, no agency labeled Smith a domestic terrorist. Smith, whose daughter was sexually assaulted in a high school bathroom in Virginia, was arrested after he lunged at someone at a school board meeting during a tense and chaotic debate over bathroom policy for transgender students. He was convicted of disorderly conduct.

In September 2021, the National School Boards Association sent Biden a letter pointing to a trend of violence and threats against school officials. It included a brief reference to Smith’s arrest incident amid a long list of examples, with a footnote to a news account of the meeting that mentioned the arrest in passing but without details like his daughter’s assault. The letter also said acts of violence and threats against school officials could be classified as “equivalent to a form of domestic terrorism and hate crimes,” and asked for federal help.

A few days later, Attorney General Merrick Garland issued a memorandum directing U.S. attorneys and the FBI to convene meetings across the country with local officials to discuss “strategies for addressing threats” against school officials and teachers. His memo did not call anyone a domestic terrorist, and it specifically distinguished spirited debate, which it stressed was constitutionally protected, from acts of violence and threats.

But voices on the right have made Smith a cause célèbre, falsely telling their viewers and readers that the Biden-era Justice Department and the FBI consider parents who disagree with liberal school board policies to be domestic terrorists.

The subcommittee investigation proposed by Jordan is just one of a number of inquiries House Republicans plan to approve this week.

Included in a separate rules package scheduled to come up for a vote Monday is a wide-ranging inquiry into the coronavirus pandemic, including the origins of the virus, so-called gain-of-function research, the production of vaccines and the conduct of Dr. Anthony Fauci, Biden’s former chief medical adviser, whom Republicans have pledged to haul before them for questioning.

Republicans are also planning to form a special committee to investigate the Chinese government’s “economic, technological and security progress, and its competition with the United States.”