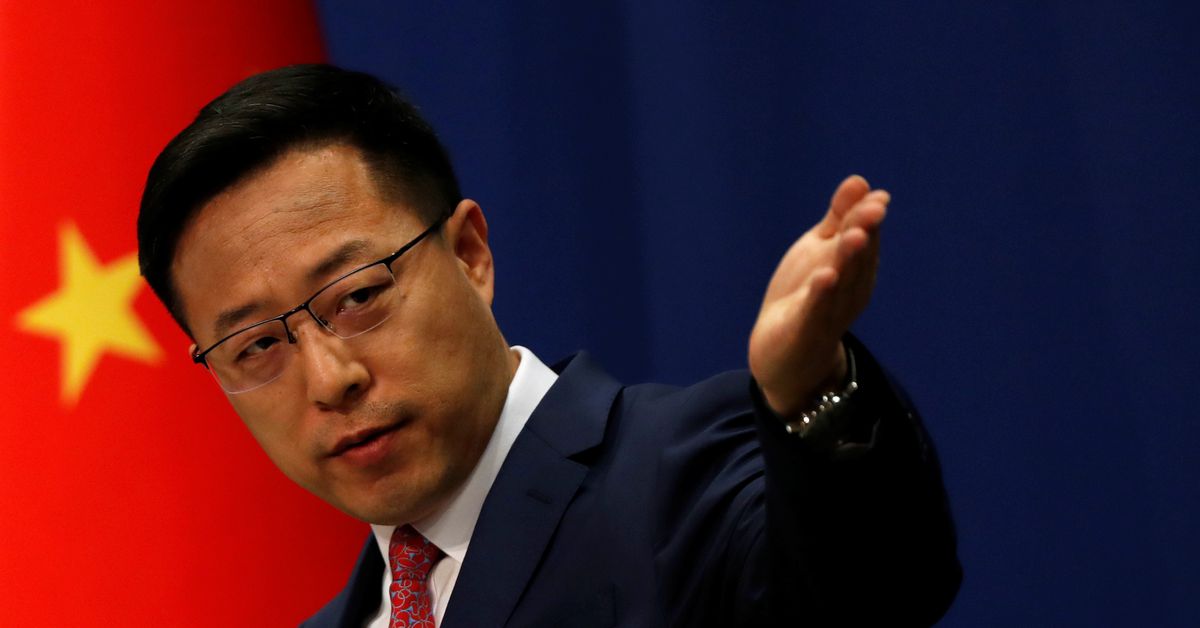 HONG KONG, Jan 10 (Reuters Breakingviews) – Beijing has taken the mic away from combative foreign ministry spokesperson Zhao Lijian. His transfer follows other de-escalatory moves, thawing relations with major trading partners including Australia, Japan and the United States. It will still take years to undo the diplomatic and economic damage his pack of “wolf warriors” has done to Chinese interests.

Professional diplomats will cheer Zhao’s removal from the podium. The outspoken official spent the last three years spouting anti-Western rhetoric during media briefings and pandering to Covid-19 conspiracy theories. His transfer to another department, while not a demotion on paper, effectively silences him. It follows the appointment of former U.S. envoy Qin Gang as China’s new foreign minister, who has already called for healthier relations with Washington.

However, it is not clear exactly why Zhao was removed. His wife’s blog posts, in which she rhapsodised about life in Europe even as the People’s Republic locked down, set off a mini-firestorm on domestic social media in late November. Zhao was also ridiculed for being caught off-guard by a Reuters reporters’ question about protests that erupted in major Chinese cities over pandemic lockdowns.

Chinese moderates have criticised the wolf warriors’ competence. For example, triumphant hardliners underestimated American frustration with President Xi Jinping, leaving Chinese companies grappling with the fallout: a wave of tariffs, sanctions and embargoes that has yet to end. Rabid anti-Americanism also led to the presumption that the world’s largest economy and most powerful military was on the verge of imminent collapse. This wishful thinking in turn led many to believe that Russian President Vladmir Putin’s invasion of Ukraine would be quick and painless.

The ascent of officials like Zhao coincided with a decline in the quality of foreign direct investment, away from job-creating projects toward speculative flows dressed up as FDI. Beijing’s wolfish sanctions on European lawmakers sabotaged a bilateral investment deal.

With the Western democracies demonstrating the durability of their power in Ukraine without firing a shot, Chinese pandemic policy in shambles and its economy reeling, it’s unsurprising if the wolf warriors are quieting their howl. But Chinese policy is a pendulum that swings between extremes. If the wolves have been sent back to their dens for now, they are sure to emerge again.

(The author is a Reuters Breakingviews columnist. The opinions expressed are their own.)

Chinese foreign ministry spokesperson Zhao Lijian, who gained prominence as one of China’s most outspoken “wolf warrior” diplomats, has been transferred to its department that manages land and sea borders, Reuters reported on Jan. 9 citing the ministry’s website.

Opinions expressed are those of the author. They do not reflect the views of Reuters News, which, under the Trust Principles, is committed to integrity, independence, and freedom from bias.

Asia Economics Editor Pete Sweeney joined Reuters Breakingviews in Hong Kong in September 2016. Previously he served as Reuters’ chief correspondent for China Economy and Markets, running teams in Shanghai and Beijing; before that he was editor of China Economic Review, a monthly magazine focused on providing news and analysis on the mainland economy. Sweeney came to China as a Fulbright scholar in 2008, and in that role conducted research on the Chinese aviation industry and outbound M&A. In prior incarnations he helped resettle refugees in Atlanta, covered the European Union out of Brussels, and took a poorly timed swing at craft-beer entrepreneurship in Quito even as the Ecuadorean currency collapsed (not his fault). He speaks Mandarin Chinese, at the expense of his Spanish.