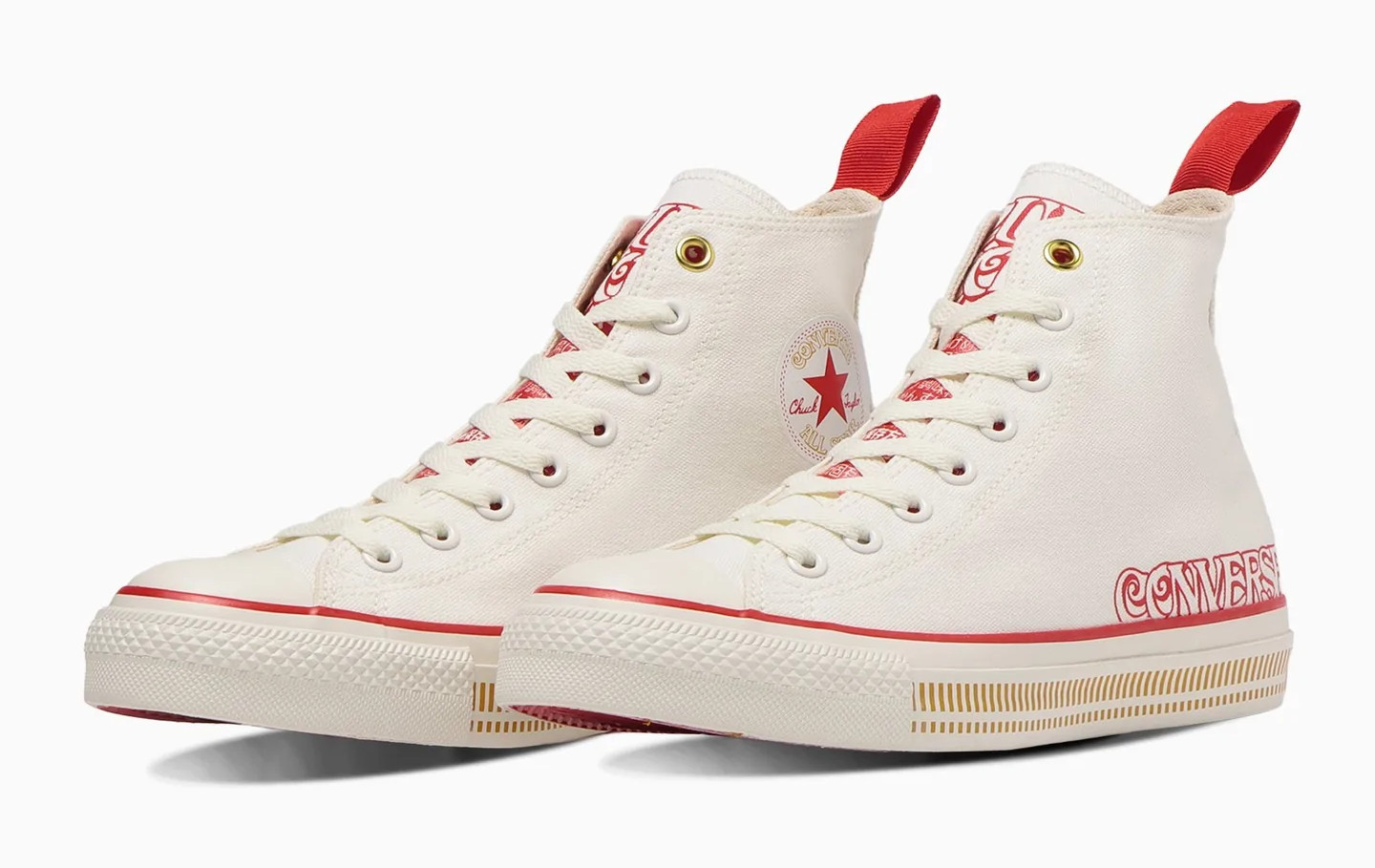 A collab between a top instant noodle company and a top shoe producer–what more could we want?

Converse shoes are beloved for their original, classic design and style, but we also can’t help but love them for the way they collaborate with iconic franchises like Pokémon and Hello Kitty. The result is always stylish, detailed designs highlighting what makes those particular partners iconic. That’s why we are super excited to see them pairing up with one of Japan’s favorite instant noodle brands, Nissin Cup Noodle.

The two famous companies have collaborated to produce two new Cup Noodle high-top shoe designs and one low-top sneaker design. The high-tops are based on Cup Noodle’s most popular flavors: original and seafood. 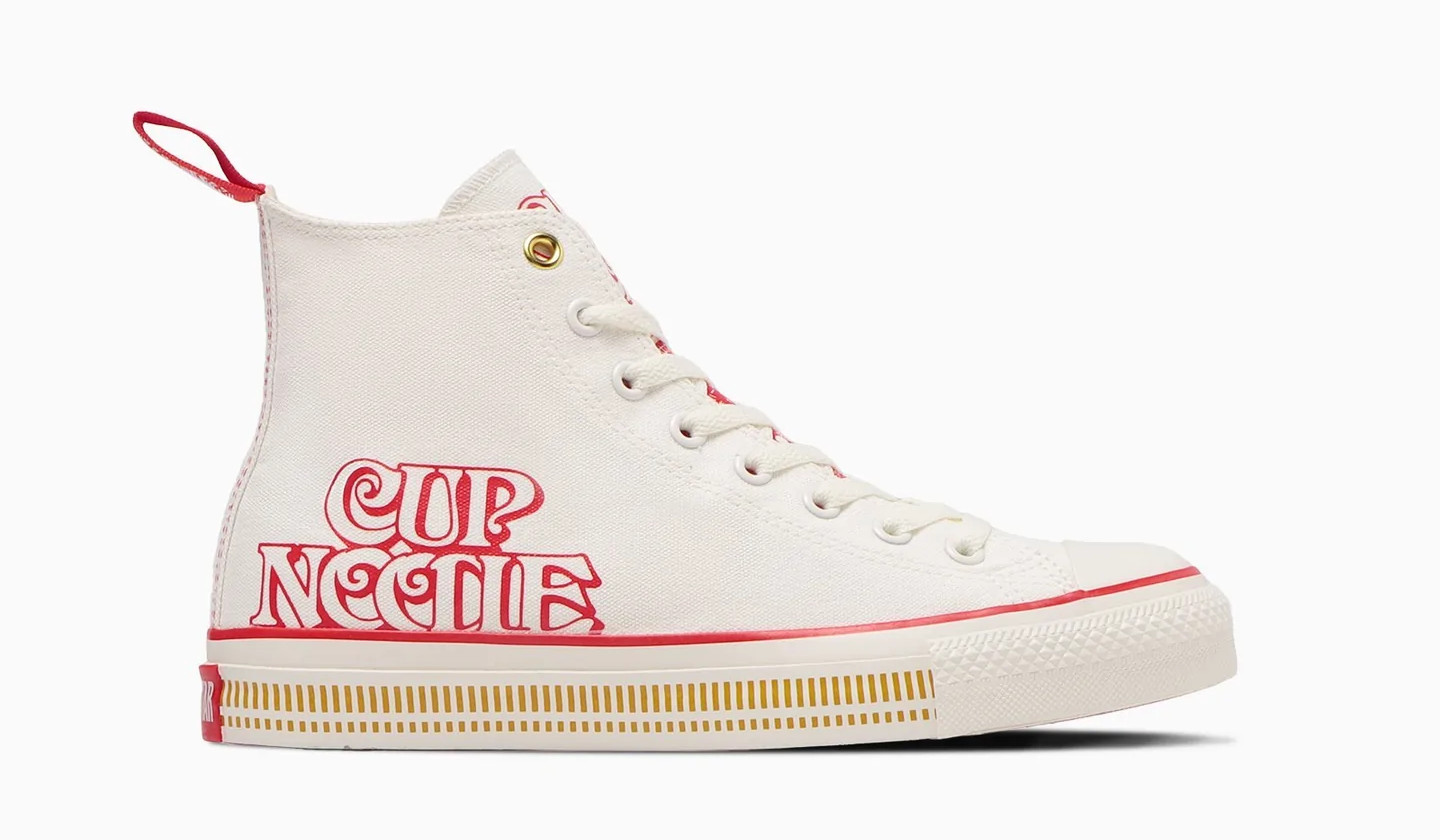 The Original Cup-Noodle high-top is, of course, modeled on the packaging’s bright red, white, and yellow design. Red stitching and accents stand out on a white canvas background, and you can round it out with either red or white shoelaces. 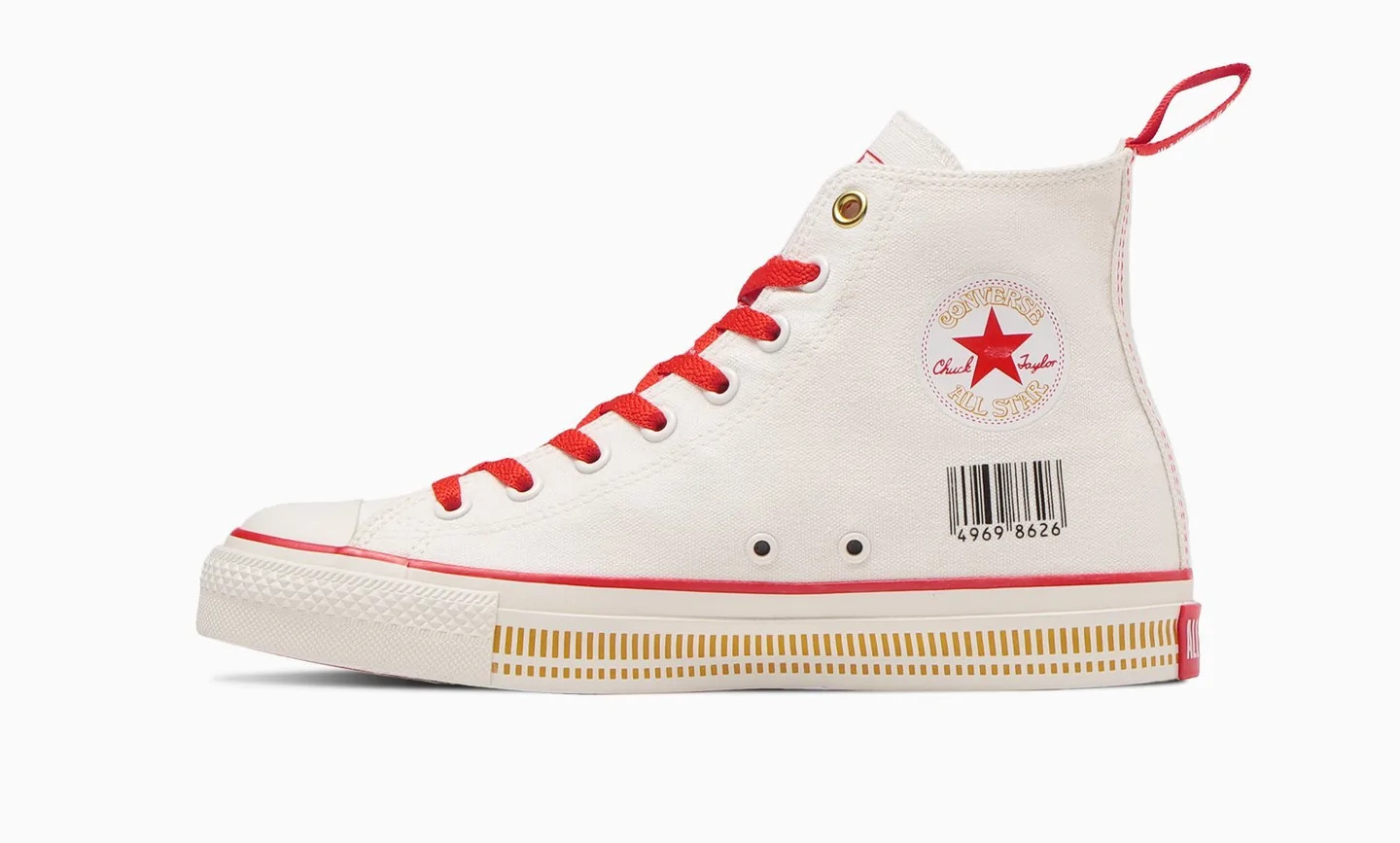 The instantly recognizable Cup Noodle logo is printed in red on the right shoe, with “Converse” written in the Cup Noodle font on the left shoe.

Under the Converse All Star logo (which features a red star and Cup Noodle font) on the inner-side ankle is the Cup Noodle barcode, and all along the midsole is the golden ribbing that you can find on a Cup Noodle cup. 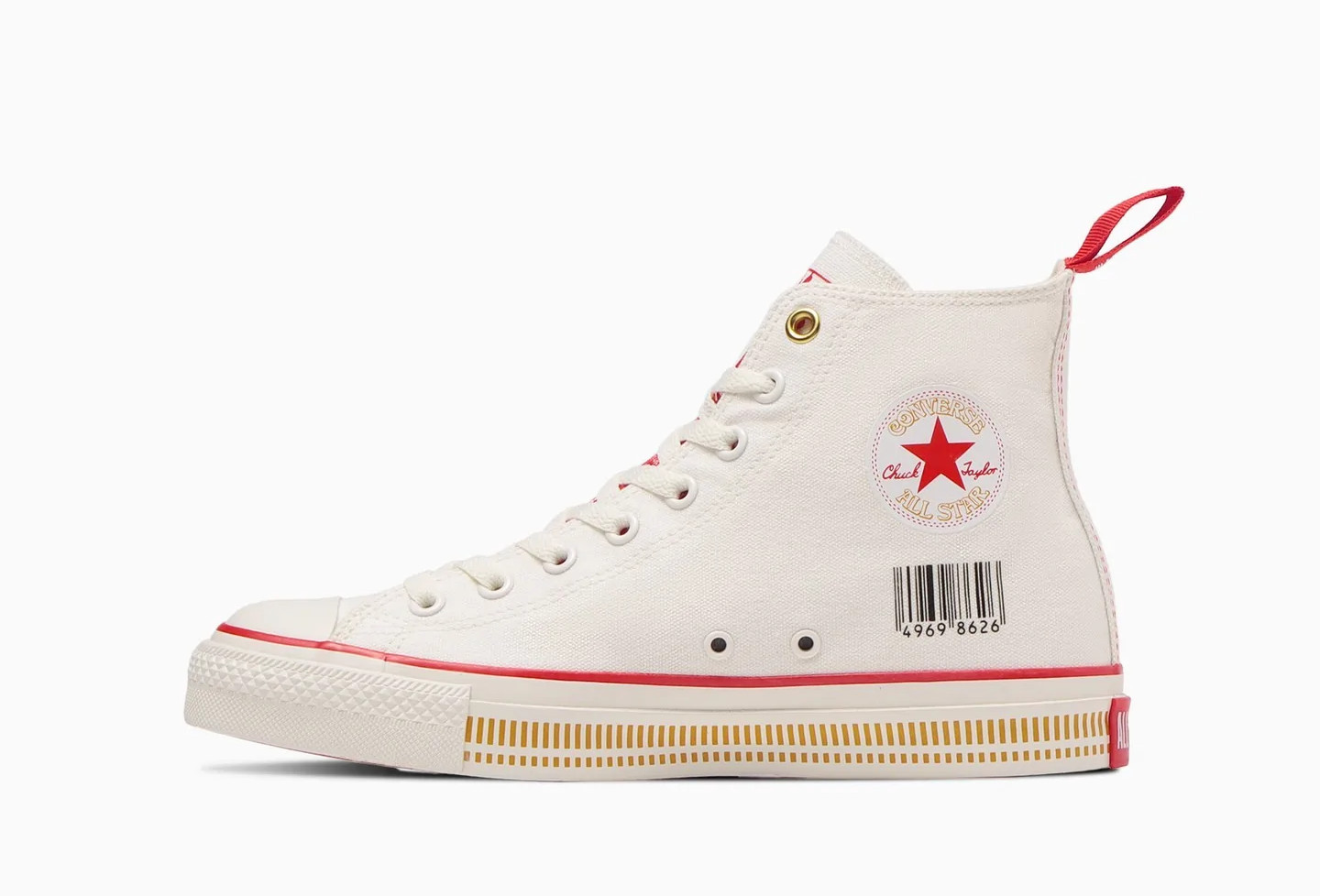 One heel of each pair has the All Star logo on the outsole, and the other has the Nissin logo. 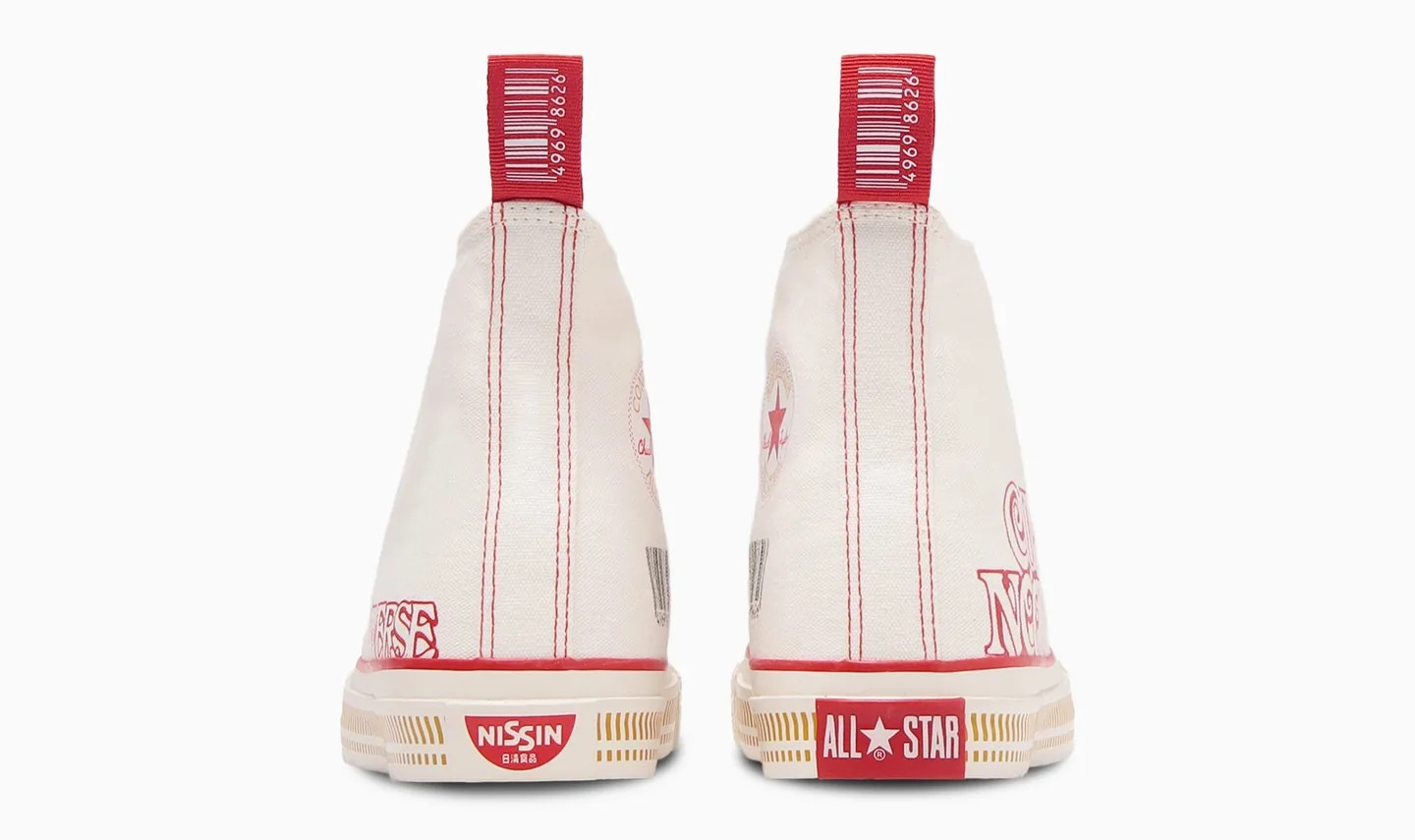 The soles of these shoes are also red!

Lastly, the tongues are decorated with the Cup Noodle logo and the ingredients list. With so many little details taken into account, these shoes almost make us hungry! 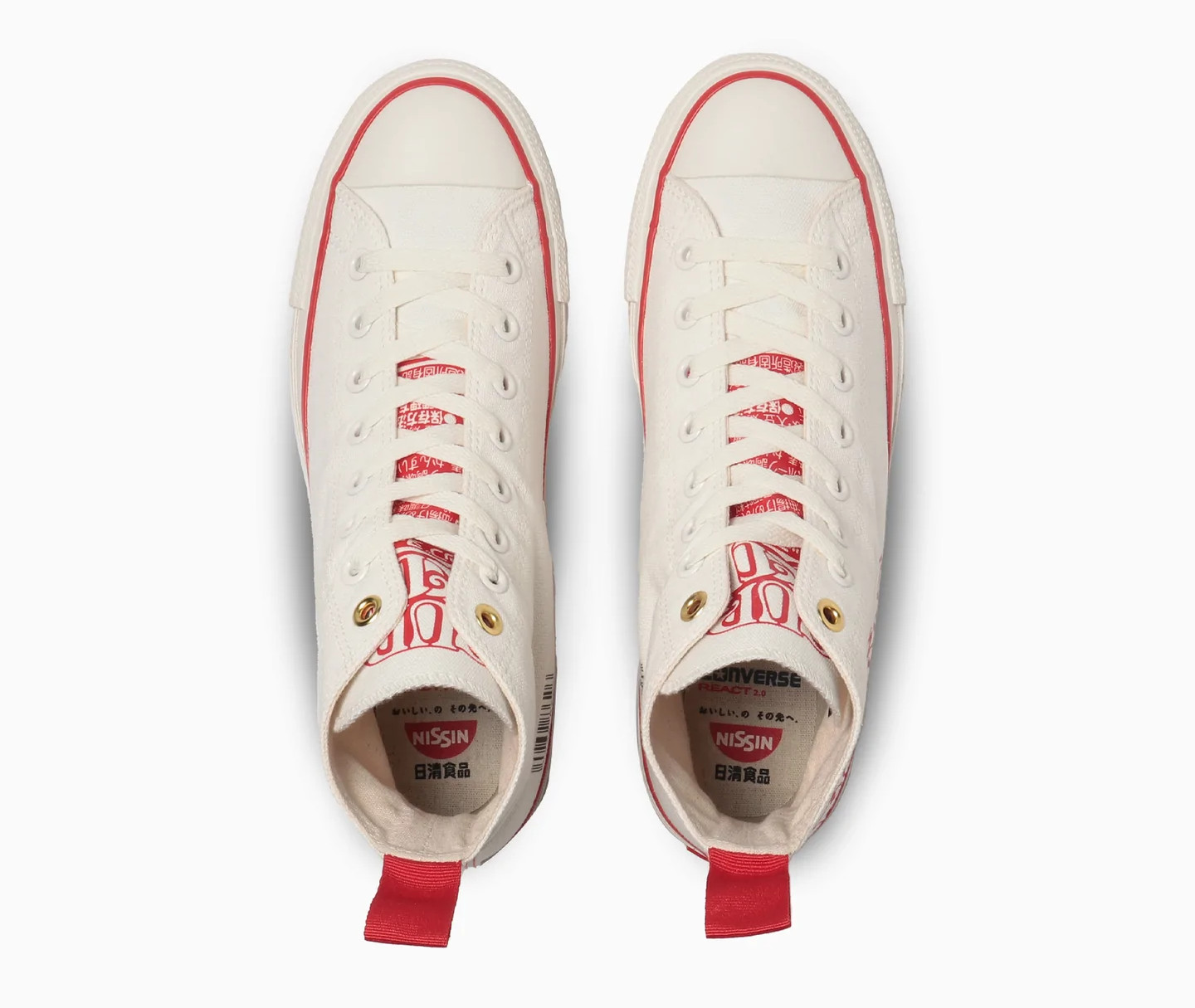 The Cup Noodle Seafood high-top model is a similar design, using both blue and red. The stitching and accents are mostly blue, including the ingredients list on the tongue, the barcode, the Converse All Star logo, and the “Converse” in Cup Noodle font on the left shoe. 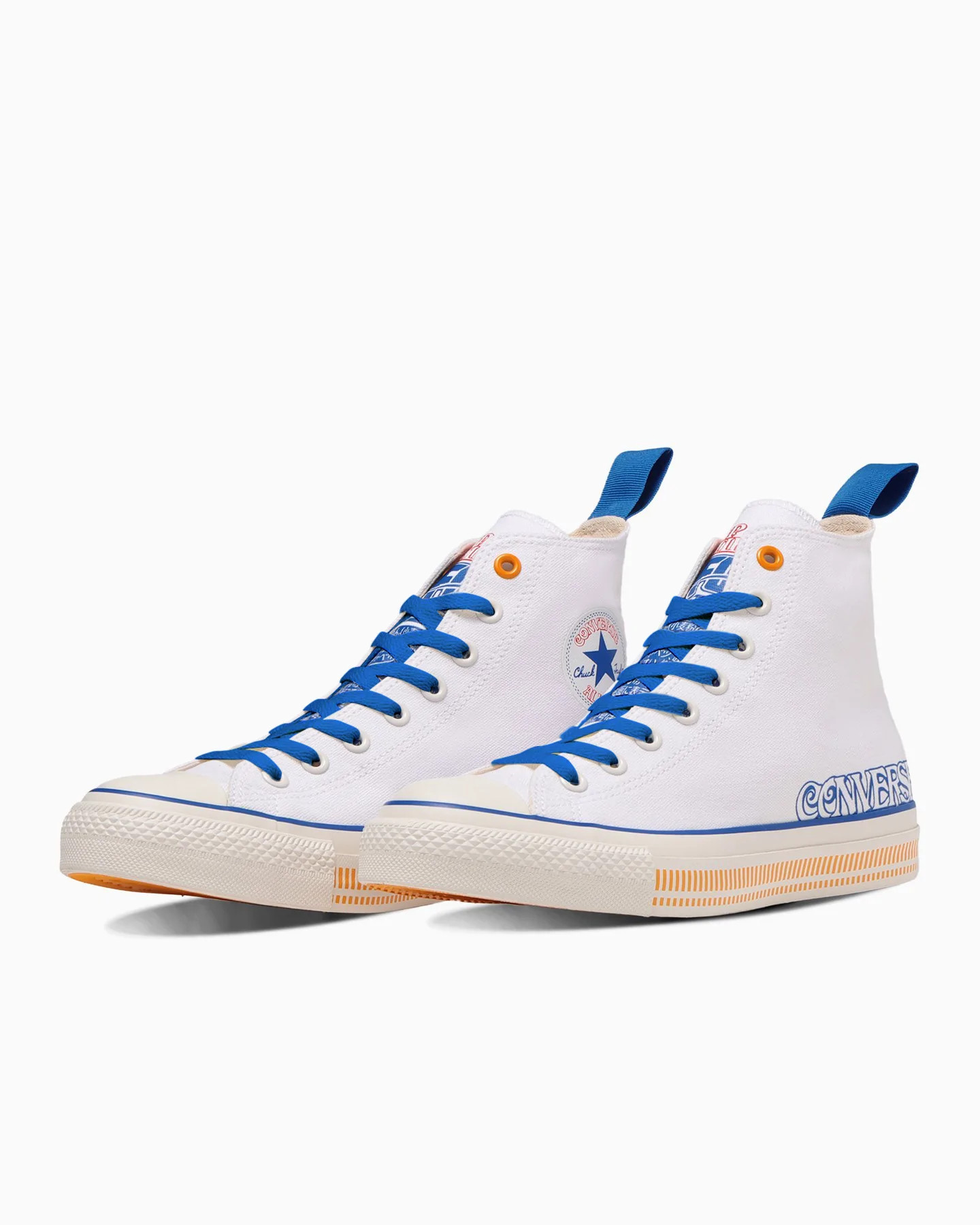 They also come with both blue and white shoelaces. 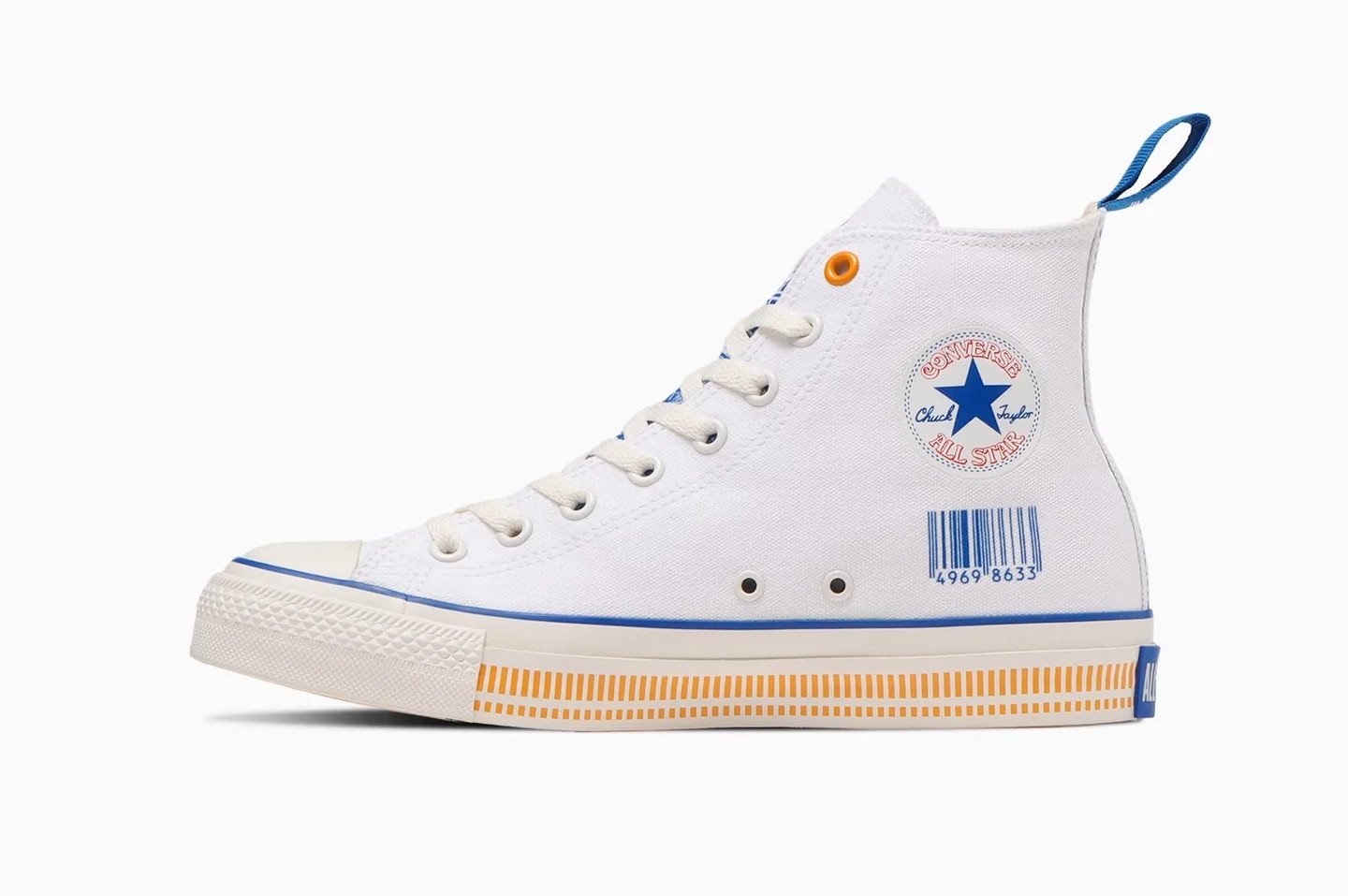 Since the Cup Noodle and Nissin logos are both red, there are a few red decorations as well, such as the “Cup Noodle” portion of the Cup Noodle Seafood logo and the “Converse All Star” text of the star logo, which is written in Cup Noodle font. 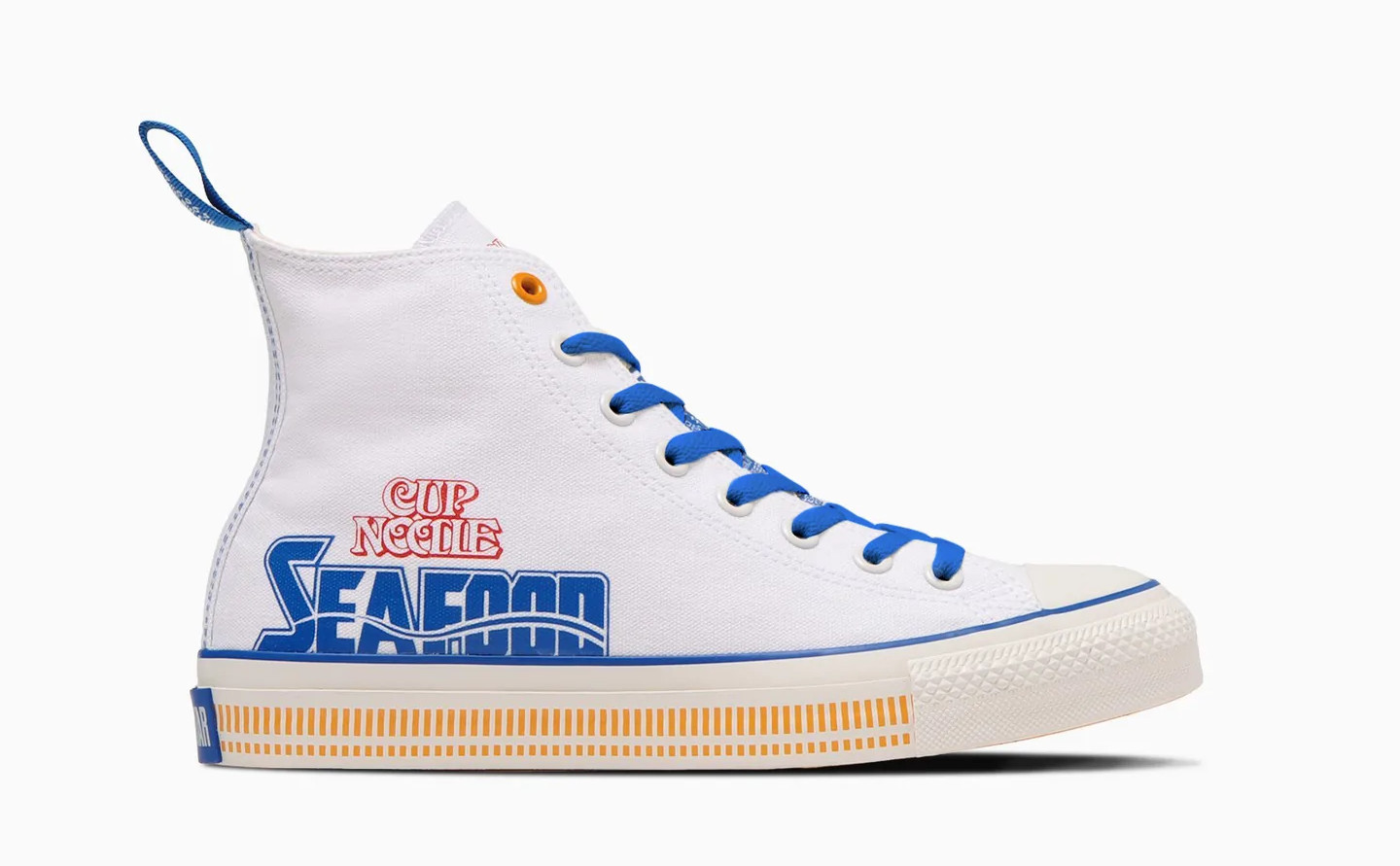 The Seafood models also come with more gold accents, such as golden top lace holes and a golden sole, in addition to the yellow ribbing on the midsole.

This model is also different in that the shoes’ heels have the All Star logo in blue instead of red, but the Nissin logo is still red. 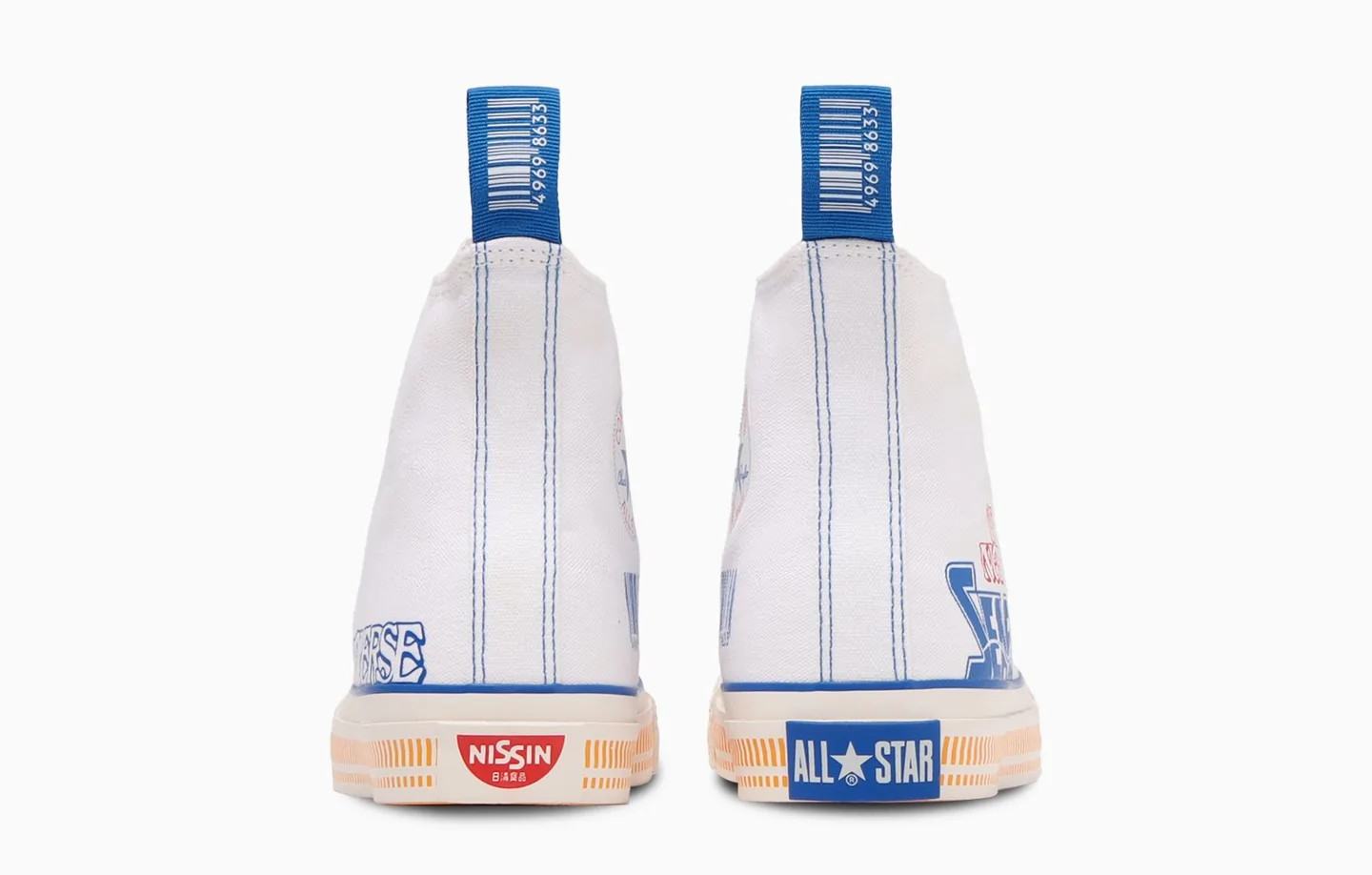 There are lots of fun details to both shoes that any Cup Noodle fan will instantly recognize, and that’s true for the Slip OX model, which has similar motifs done much more boldly in black, white, and red.

Featuring a diagonal print of Cup Noodle’s unmistakable logo, a picture of the Cup Noodle cup itself, and the ingredients list, with a red stripe along the midsole and a red “3 minutes in hot water” label hanging off the heel, these are a great homage to one of Japan’s top instant noodle brands. 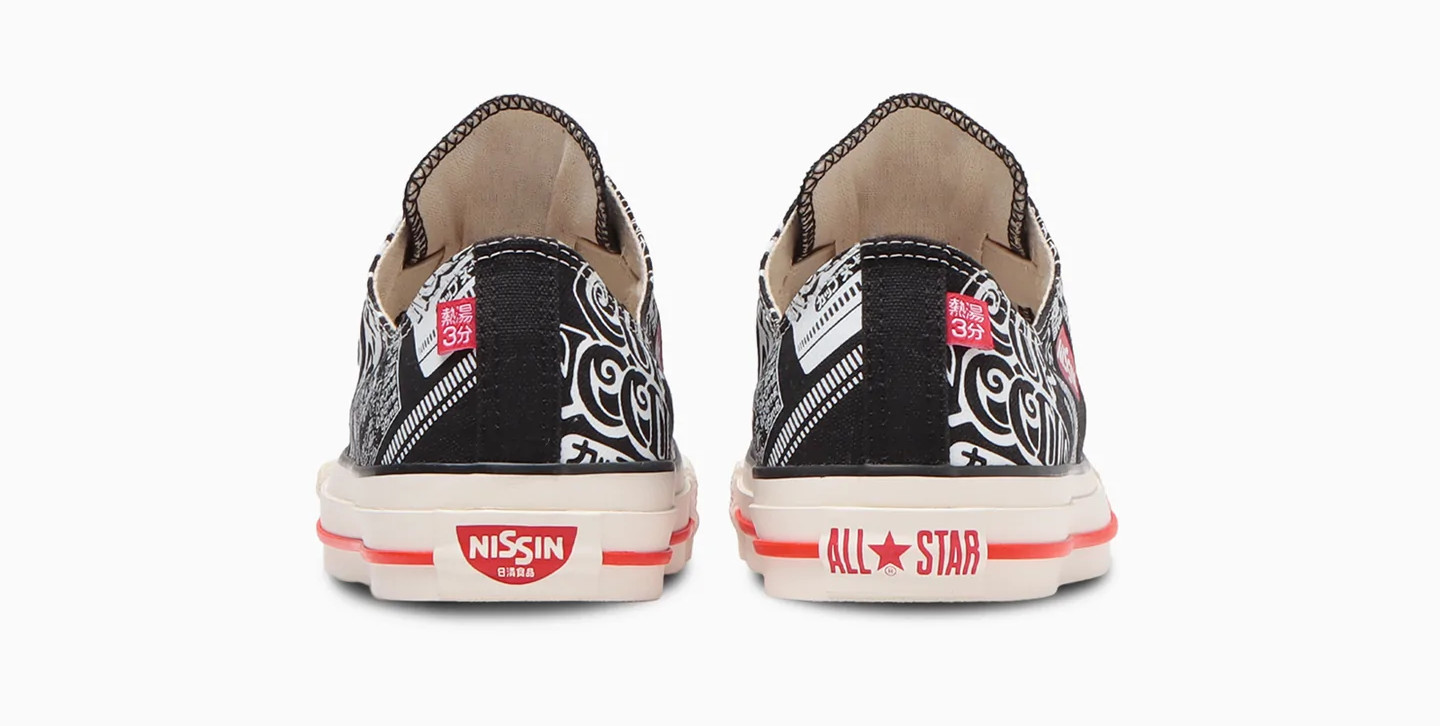 Plus they come with spare shoelaces that are curly like instant noodles!

All three shoes will retail for 13,200 yen (US$100.19) and will be available soon on the Converse online store or wherever Converse shoes are sold. They’re not yet in stock online, but you can sign up for e-mail notifications if you want to know when they’ll be available. These are the perfect shoes for Converse-wearing Cup Noodle fan, so make sure to pick up a pair if you’ve got one in your life!

Social Media News
Previous Post
The hole in the ozone layer is shrinking. Here’s how it was plugged
Next Post
Cheapest Items on China’s Amazon, Taobao