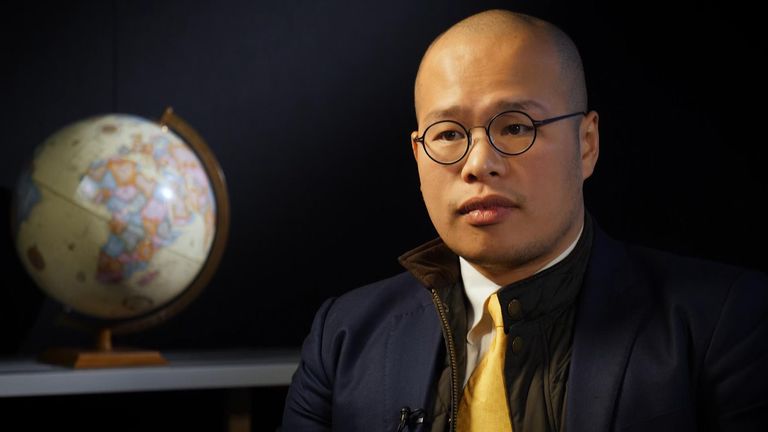 The son of media mogul and British citizen Jimmy Lai, jailed in Hong Kong for allegedly breaking national security laws, has criticised the UK government for failing to speak out against China.

Sebastien Lai, 28, is in London this week to pressure Prime Minister Rishi Sunak and Foreign Secretary James Cleverly for a meeting about his father’s imprisonment after first making a request seven months ago – but hearing nothing back.

He told Sky News that the Americans have done more to raise his father’s case than the British, despite Mr Lai being a British citizen and passport holder.

Mr Lai, 75, founder of pro-democracy Hong Kong paper Apple Daily, has been in prison since December 2020 when he was convicted of lease fraud – normally a civil issue resulting in a fine.

The billionaire became the first high-profile figure to be charged under the newly-imposed national security law for allegedly conspiring and colluding with foreign forces to “endanger national security” – mainly due to pro-democracy statements he made on Twitter.

Jimmy Lai has been charged and convicted of a variety of alleged crimes since first being imprisoned, including 15 months for lighting a candle and saying a prayer at a Tiananmen Square massacre vigil.

He now faces being convicted in September under national security charges for “colluding with foreign forces”, with a minimum jail term of 10 years and a maximum of life.

His son and lawyers believe the outcome will be pre-determined by the Hong Kong government, which they say wants to make an example of him after decades of Beijing targeting him, firebombing his house and offices and threatening him and his family.

With Mr Lai now facing life in prison, where his son admits he could die, his supporters are calling on the British government to speak up against Beijing.

The media tycoon has had a British passport since 1994 after escaping to Hong Kong from China on a fishing boat aged 13 – and it is his only passport.

His son, who has not seen him since he was imprisoned and cannot enter Hong Kong for fear of arrest, is now publicly calling for the British government to step in.

Sebastien Lai said a meeting with junior Foreign Office minister Anne-Marie Trevelyn this week was very welcome but it was only the first step and more needs to happen.

He told Sky News: “The American government has spoken more about this than the UK government, which is a real embarrassment because my father is a British citizen and he’s currently in prison for standing up for the very freedoms we have in this country.

“There was radio silence before we met the junior minister, that was a step forward but they need to do more, he is a British citizen, a British passport holder.

“I’m very frustrated they haven’t said anything about my father’s case.”

Please use Chrome browser for a more accessible video player 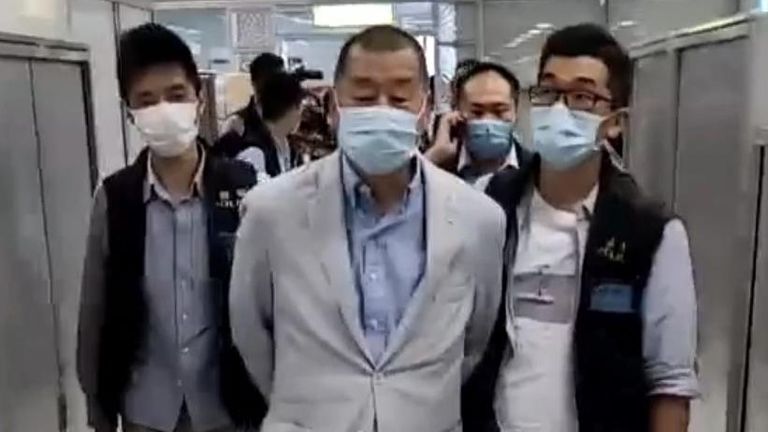 Senior Tory Sir Iain Duncan-Smith, founder of the Inter-Parliamentary Association on China which brings MPs from around the world together to hold China to account, brought Mr Lai’s case up at Prime Minister’s Questions this week.

The PM said Britain should stand up to “Chinese aggression” and his spokesman later called on Hong Kong authorities to stop targeting “pro-democracy voices, including Jimmy Lai”.

The steady dismantlement of Hong Kong’s rule of law

China has effectively ripped up the international treaty that should have given Hong Kong a degree of autonomy after its handover from Britain.

Its puppet authorities there are now using new security laws to persecute what’s left of its freedom and democracy movement.

Outrageously, Jimmy Lai has been sentenced to several years in prison for allegedly violating a lease contract, something that hitherto has never warranted a custodial sentence.

He has been given 15 months for lighting a candle at a vigil remembering the victims of the Tiananmen Square massacre when the Chinese communist regime murdered hundreds of unarmed innocent civilians.

He was punished for attending a pro-democracy demonstration attended by hundreds of thousands of others.

His company has been delisted and stripped of assets even before his full trial later this year.

These judicial excesses are worthy of a banana republic not a place that still claims to pride itself on the application of the rule of law.

America and other countries have called Hong Kong out for its treatment of Mr Lai and warned their own businesses it may no longer be a safe place to operate.

A British citizen with a British passport has been seized and held against his will for political reasons and yet the UK government has been curiously reluctant to speak out or warn its own investors about the steady dismantlement of Hong Kong’s rule of law.

He will be tried later this year on absurd charges that he ‘colluded with foreign forces’.

The Sunak government’s response then will be a key test of its willingness to protect subjects wherever they are and defend the values and principles it claims to hold dear.

But Mr Lai’s son, his lawyers and Mr Duncan-Smith do not think the government went far enough.

The Foreign Office would not give Sky News a comment on Mr Lai’s case, referring us back to Mr Sunak’s words in parliament.

UK-based lawyer Caoilfhionn Gallagher, leading Mr Lai’s international legal team, told Sky News: “It was baby steps in the right direction but what we need is a quantum leap by the British government.

“They can do that through bilateral relations, they can emphasise we have a prisoner of conscience behind bars in Hong Kong.

“A Nelson Mandela-type character behind bars for speaking truth to power, they need to let the Hong Kong authorities know they will not continue to have business as usual.

“They need to look at whether UK businesses are safe working in Hong Kong as any UK company who does business there isn’t safe, anybody can get a knock on the door from the national security police just for a tweet, a Facebook post.”

She added that Jimmy Lai has been targeted “as an example”, with the message to anyone “who dares to be a journalist or speak out about the Hong Kong or Beijing authorities is ‘keep silent or you’ll be next'”.

Ms Gallagher said they remain hopeful the British government can help, as she used the example of British-Iranian Nazanin Zaghari-Ratcliffe, her colleague’s client, who was eventually freed from prison in Iran last year after the government stepped up its efforts when her husband went on hunger strike.

Mr Duncan-Smith, who is sanctioned by China, added that the British government has “done little or nothing” about protesting against Mr Lai’s arrest.

“We need now to warn British companies you can no longer rely on being in Hong Kong as a safe place under law because China is trashing it – if we did that China would get very worried.”