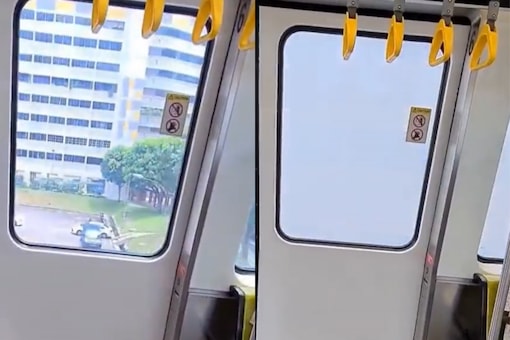 Trains highlighted how the unique feature has gained the attention of umpteen internet users all across the globe. (Credits: Twitter)

A clip of a train that automatically blinds windows when passing near a residential building has created a massive buzz on social media. This futuristic-looking train is Singapore’s Bukit Panjang Light Rail Transit (LRT), also called the country’s first light rail, according to the official website of Singapore Trains (SGTrains). While explaining the misting glass windows of the train, SG Trains highlighted how the unique feature has gained the attention of umpteen internet users all across the globe.

The innovative feature of the train was introduced to protect the privacy of citizens who live adjacent to the LRT line. Hence, when the public transport vehicle comes close to a residential building, its windows automatically turn misty. The video of the vehicle that’s gone viral on Twitter shows the futuristic-looking train moving, but when it approaches close to a residential building, the windows are blinded for a few seconds. Meanwhile, when the vehicle passed the building, the windows automatically turned normal. The Twitter user who shared the clip stated, “A train in Singapore with windows that automatically blind when passing residential blocks.” Watch the video here:

The viral video has already amassed more than thirty-one thousand views and hundreds of likes on the micro-blogging site. The unique feature of public transport has left many amazed, but a few also couldn’t understand the need for it.

A user said that the innovation is, “Too good to believe.”

Another asked, “I don’t get this, why they built that in?”

While explaining the route of the fascinating train, SG trains stated that the trains run on an exclusive elevated guideway. What makes them more unique is that they’ve fitted rubber tyres and while being in operation they make less noise. “These trains operate on an exclusive elevated guideway, unhampered by road and pedestrian traffic. Compared to the metal-wheeled MRT trains, these APM trains are fitted with rubber tyres and are relatively quiet during operations,” they said.

What are your thoughts about the innovative update?