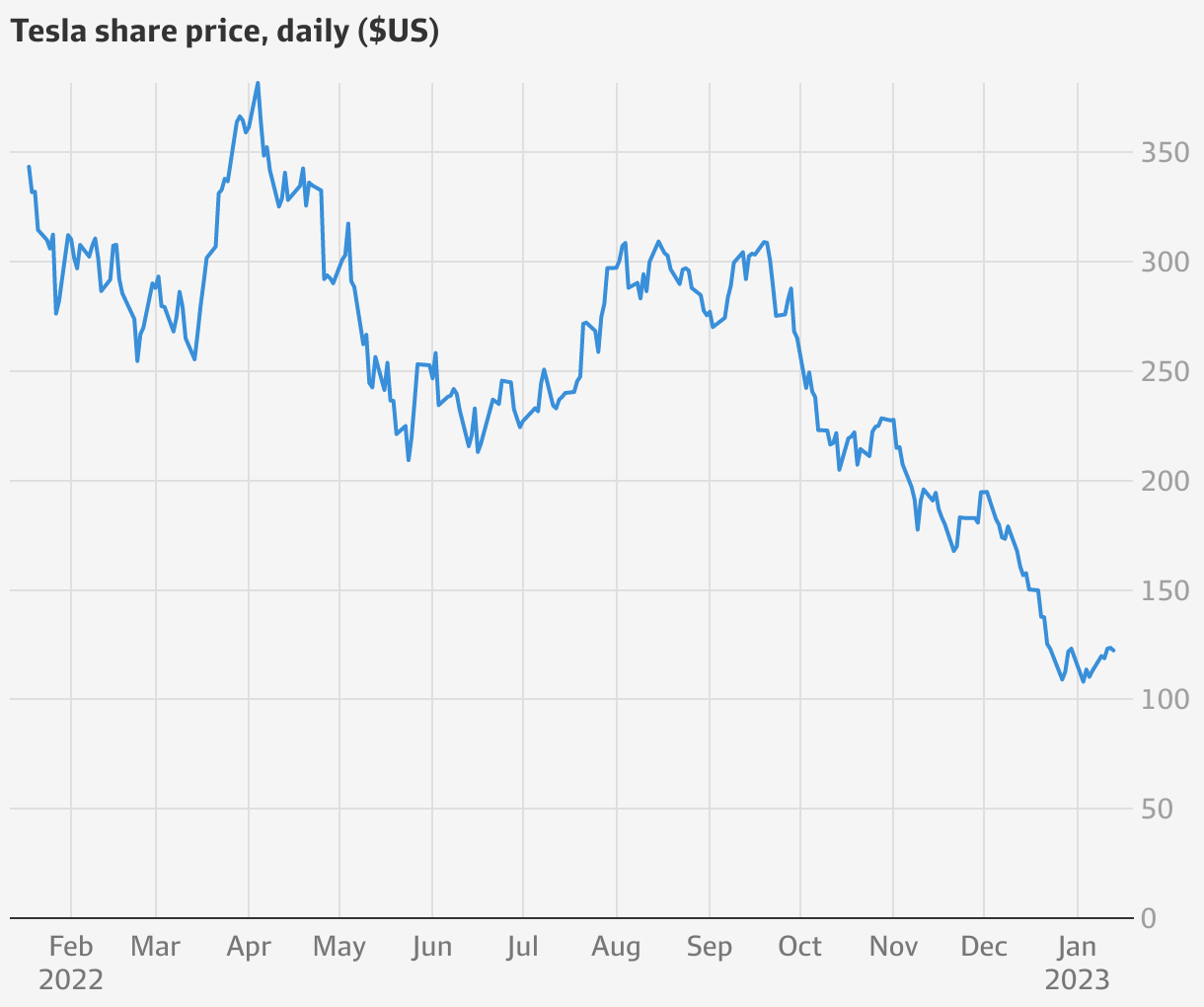 The spike came as shares in Nasdaq-listed Tesla slumped 12 per cent on Tuesday, January 3 to close at $US108.10 – a two-and-a-half-year low. The activity suggests many local traders are buying what they perceive is a “dip” in Tesla shares, which are down 64.3 per cent over the year to Friday, but have skyrocketed 424.6 per cent over the past five years.

The January 3 slide followed news that Tesla had fallen short of its goal to expand EV deliveries by 50 per cent, under-performing Bloomberg’s sales expectations even as it achieved a quarterly record. Investors and analysts have also raised concerns about Mr Musk’s time and focus since he acquired the ailing social media platform Twitter last year.

Zehrid Osmani, a portfolio manager in the local office of Scottish investment firm Martin Currie, said retail investors were right to be bullish on the EV market going forward. Martin Currie projected annualised growth of 40 per cent in the global sector over the 10 years to 2030.

“However, we are cautious about Tesla’s growth prospects in the mid-term, given the increasing competitive landscape in the electric vehicles market segment, with increasingly more competitors launching models, as they close the gap with Tesla,” Mr Osmani said. “We expect Tesla’s technological lead in EV to narrow rapidly, as both incumbent automakers and additional new entrants launch new products.”

A better bet on EV market growth might be to invest in suppliers such as electronics and components manufacturers, he said, which do not face the same level of intense competition or pricing pressure.

The comments come amid the release of optimistic EV consumption research out of China, which is believed to be a key market in the sector’s growth prospects.

A survey of 2000 Chinese citizens aged between 18 and 65 by fund manager Fidelity International, released on Friday, found 60 per cent of car owners and 84 per cent of non-car owners preferred EVs to combustion engine vehicles. But the survey also found Chinese customers would not necessarily be loyal to a particular auto brand, instead prioritising technology, experience and design.

“The survey highlights the fact that EV adoption in China is moving from an emerging trend to the mainstream,” Fidelity’s head of Asia-Pacific research Victoria Mio said.

“Companies will need to adapt by providing faster iterations of technology and models. Those that cannot keep up with the pace of software development will eventually be outcompeted in the long term.”